How to remove .bat extension from file name in a parameter?

I made a bat file and during execution, it displays a title in the command window.

The title includes the bat filename, and it is displayed in full, including the .bat extension.

The code I'm using to do this is shown below (see the Title command on the 5th line).

The names I have used:

I want the title-bar to read Hacking Facebook Called Domain.

How do I do this? 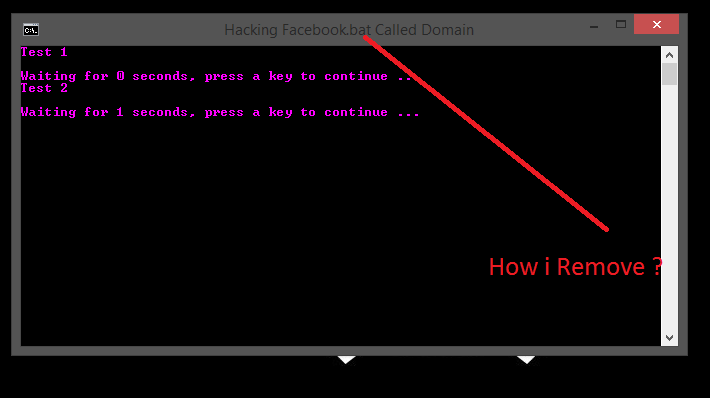 The screenshot made the question much more clear.

I see you're using %~nx1 to show the filename in the title of the command prompt that shows up.

To use the filename without the extension, instead of using %~nx1, use %~n0.

Not the answer you're looking for? Browse other questions tagged batch-file filenames parameters title or ask your own question.

0
Having a problem executing .bat file (sub-menu) through .bat file (menu)
1
Run a .bat file without typing the extension
1
Bat file fails when file name has spaces
2
BAT file to extract folder name from a file name & move the file into that folder
17
CMD window will not close if folder is closed during execution of bat file
1
Writing a .bat file
2
Batch File to Start Software application if it's not already running
1
Why this multiline for/in/do doesn't work in a batch?
0
Remove characters from string when passing as parameter