PC restarts randomly for unknown reasons. Possibly hardware issue. What could be wrong?

My PC randomly restarts whenever there is load on it but not all the time. Examples are when I'm playing a game or watching a movie. Sometimes, I can get through hours of sessions and no restart at all. But sometimes it would just restart with no warning or message after the reboot. No BSOD whatsoever.

I did a full HDD format and clean reinstalled Windows. Afterwards I only installed specific trustworthy Software I've been using on my same hardware for years. So I'm leaving out software as an issue as it STILL reboots from time to time.

I've run stress tests on both my CPU and GPU. Both exceeded 66 C and remain turned on and yet when it usually reboots the temp is around only 50~55. So I guess that leaves heating issue out of the picture.

I also did a BIOS reset. Nothing was fixed.

When I compress files of huge size using 7zip (or copy large files), it DEFINITELY reboots. This is the only thing I can confirm. I've tried packing folders several gigabytes in size and it rebooted EVERY time.

So is it the CPU? Or the Memory? Or anything else. Also any specific diagnostic method I should use.

I've ran several Memory tests like you asked. But the tests show green. Should I try something else?

My PC is configured to show BSOD like in the picture below but it STILL doesn't show any error messages. And Minidump doesn't exist either. 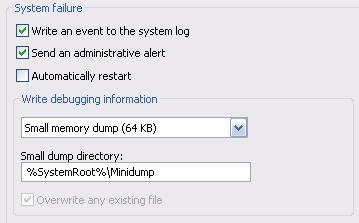 I also use 2 External HDDs from time to time. I only use them for backups and so I don't use them that often.

It sounds like the memory. have you tried checking the status on memory when ur working on a zip etc?

From your computer specs, I see that the computer has been used for a long time. Which drove me to this conclusion.

There are two solutions for your problem,

First, you have to buy new SATA connectors (SAME THE ONE THAT YOU HAVE) and replace them with the current one. Second, you buy a Thermal Compound (Arctic Silver 5 is the best choice).

Now, just power on your computer and check.

Well it sounds like a RAM Issue. Try starting Memory Diagnostics by going to

If the results are unclear, you can try the

Not the answer you're looking for? Browse other questions tagged troubleshooting reboot or ask your own question.

0
PC hangs and reboots from time to time
0
computer shut down suddenly and now won't boot
16
Can PSU cause my PC to reboot?
1
(not so) random PC restarts, getting worse
0
What is the cause of my hanging freezing computer?