I have a 1TB generic external hard drive containing a single HFS partition. I originally formatted this using Disk Utility and it worked fine. Now, for some reason, it's not auto-mounting when I start up.

Using mount at the command line gives the following error:

... but if I use the mount_hfs command it works fine, mounts, and is readable.

fsck gives me an error about a bad super block:

... but fsck_hfs -fn /dev/disk1s2 doesn't find any problems and reports that the volume appears to be OK.

In Disk Utility, the drive appears to have a single MS-DOS partition with a curious notice about how it appears to be partitioned for Boot Camp: 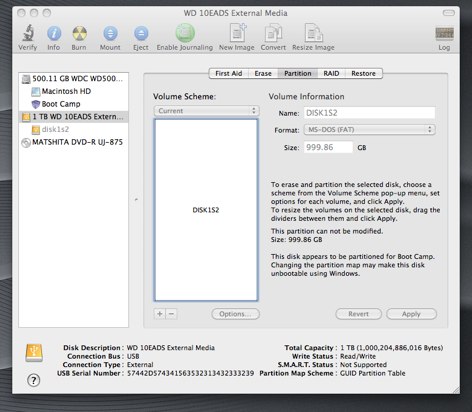 I have the Boot Camp HFS driver installed in WIndows 7, and that OS sees the drive/partition normally. What's wrong with my disk?

It looks like the problem was the partition table.

The filesystem was intact, but the HFS+ partition on the external drive was mistakenly flagged as Microsoft Basic Data instead of Apple_HFS. I used the GPT fdisk utility to change its type back to HFS+, and it immediately appeared on the desktop and worked normally again.

I am currently experiencing a very similar issue. I ran the following command, the output of which I included. However, this still did not fix the problem for me, however maybe you will have better luck.

Not the answer you're looking for? Browse other questions tagged macos filesystems mount hfs gpt or ask your own question.

2
Why doesn't "Disk Utility.app" recognise my `dd`-copied disk?
1
rEFIt gives me a "Boot Legacy OS from HD" option when I have only Max OS X after erasing my Boot Camp partition
2
OS X Disk Utility Fails to reformat
9
How can I mount dd image of a partition?
0
Having Trouble Mounting HFS Filesystem at Boot on Ubuntu Server
1
How do I repair an external hard drive with a corrupted catalog?