How to toggle Caps Lock status on remote Windows system?

Sometimes people turned on the Caps Lock on a remote Windows system which is running VNC service. When I connect to the remote system through VNC Viewer, the Caps Lock status on the local and remote machines is inverted. Everything that I typed would be in CAPITAL letter despite my local machine has not turned on the Caps Lock. I have to toggle Caps Lock on local machine in order to get the correct letter in remote system. Even though that works but it is an annoyance especially when working on system that is caps sensitive.

Is there a way to toggle the Caps Lock status on remote system without physically in front of the "remote" system?

I came across a fix/workaround by Ray Rajko Bogdanovic's reply.

Ray suggested to use the On-Screen Keyboard.

Follow the steps below to toggle the Caps Lock status:

This should work for other keys as well.

I'm using a Mac to remotely access a Windows machine. I just discovered that I am able to turn the remote desktop's Caps Lock on and off using "alt+Capslock" on my Mac.

Basically this is a modification of @jooguan answer above.

The trick of pressing Windows key and type keyboard, didn't work for me remotely.

So I used literally the same suggestion of Ray Rajko Bogdanovic's to use the On-Screen Keyboard, following these steps:

Setup will place a shortcut link in the all users startup folder (Windows 7, Vista and XP) so that when you start the computer Caps Lock will run automatically. 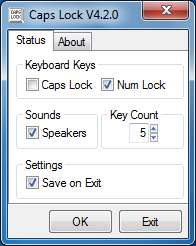 By default Caps Lock is turned off.

Not the answer you're looking for? Browse other questions tagged keyboard remote-desktop vnc capslock or ask your own question.

2
How to manipulate the keyboard flags under windows?

5
How can I remap keys for a remote desktop session in Windows?
5
Ubuntu doesn't release caps lock
1
Trucrypt and remote access - how to?
1
How to turn off Caps-Lock toggle notification?
9
RealVNC Viewer: How can I escape from the remote desktop screen by using keys?
0
Toggle Caps lock with command line batch file / RDP sync Caps lock
0
Windows Remote Desktop display on local monitor as well?