how to shut down a server from the webinterface

I want to be able to shutdown my server remotely by clicking on a button on a web page. The server runs Ubuntu 14.04.1 64 Bit and a python web application. I have not decided which yet, but it will be either Apache or Gunicorn.

I need to be able to shut the server down remotely since I won't always have physical access to the machine. I'd rather not have to log in via ssh and execute a poweroff command for that, so I want to have a kind of button in the browser to initiate shutdown.

What are the best practices, or at least the most secure ways I can do this?

Of course, the web interface will be secured and there will also be a mechanism to protect against clicking by accident.

There's no reason to write a script for this, you can do it through python. In any case, you can't set the SUID bit for scripts on Linux.

The simplest way would be for you to run the shutdown command from within your python script and then give the webserver's user the right to run it.

That's it, you now have a button that will shutdown your server.

A note on security

I have no idea why you would want to set up a web interface for this. This is, obviously, very unsafe. Anyone who has access to that page will be able to shutdown the computer. However, there's no way around that, whatever you do, you are going to have a webpage that can shutdown your machine which means that anyone who can see the page can do so. So, be careful.

A much better alternative would be to run something like this from another machine:

That's a single command and, assuming you are on a Linux system, you can even create a one-word alias for it. If you're using bash, just add this line to your ~/.bashrc:

That way, all you need to do is run shtdn and you can safely and securely shut down the remote machine.

If you really insist on being able to do this via a web interface, I suggest you try something like webmin. It is a full featured, web-based server administration suite. It is free and open source, very easy to install and offers an intuitive GUI for many different aspects of your computer. You can use it to configure SAMBA shares, webservers, databases etc. You can also use it to shut down your system.

On Debian-based systems, you can install it by simply running

Once you have done so, go to http://localhost:10000 and log in as root. You may have to first activate the root account by running sudo passwd. Then, go to System -> Bootup and Shutdown, scroll to the end of the page and click on the "Shutdown" button: 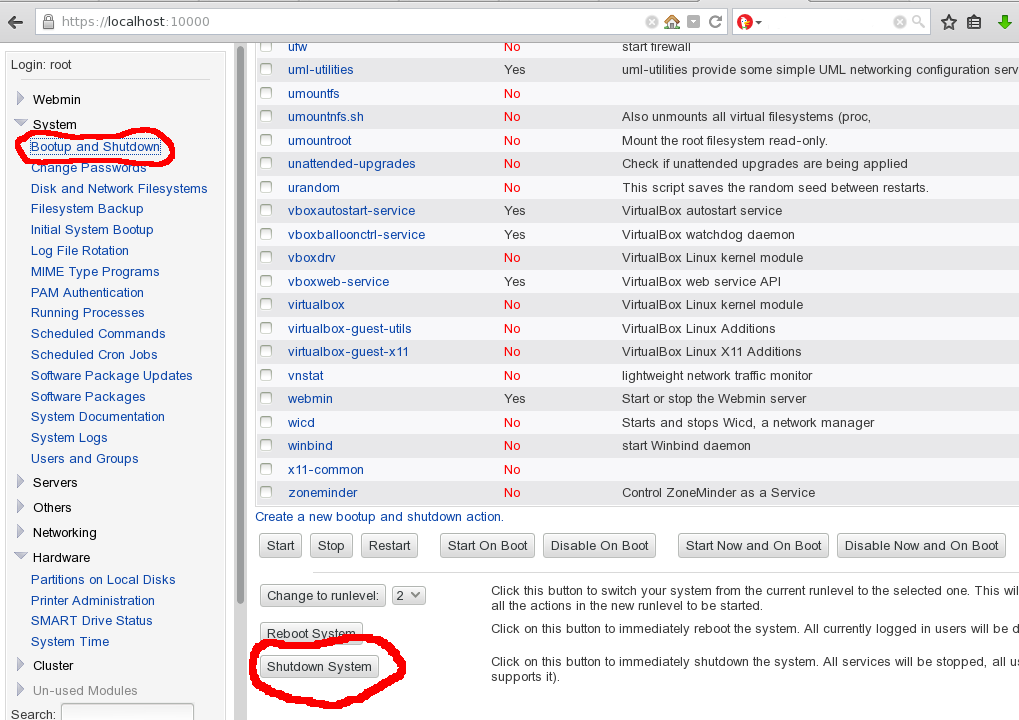 This is very easy to set up and is likely to be more secure than any ad hoc solution you implement.

Not the answer you're looking for? Browse other questions tagged linux python shutdown webserver or ask your own question.