What happens when I delete the entire Windows registry?

I've been wondering what would happen if I delete all the registry stuff. Would my PC stop working? Edit: I've edited the code, now it should delete the registry.

You can’t delete the root nodes. They don’t physically exist. You can, however, delete their contents, via Regedit (as opposed to reg).

Regedit hangs as soon as I try to delete HKLM\SYSTEM. After resetting the VM (because I’m lazy), I get the following screen (OS is Windows XP): 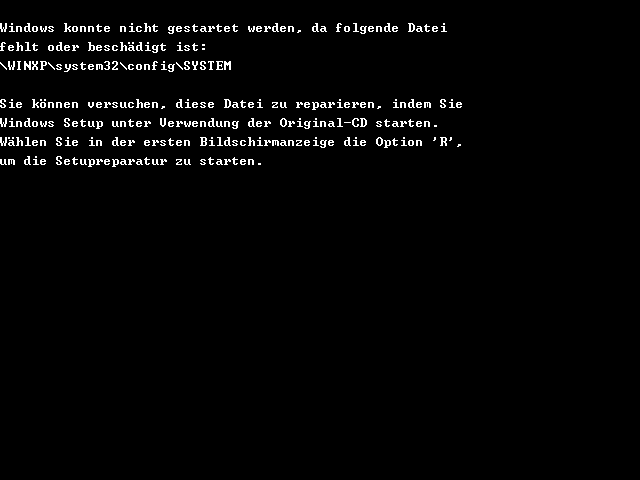 (“Windows could not start because the following file is missing or corrupt: \WINXP\system32\config\SYSTEM”)

So yes, deleting stuff from the registry will absolutely positively kill Windows. And unless you have a backup, restoring it is impossible.

Windows stores a lot of critical information in the registry, which is loaded (at least a part of it) during an early stage while booting. If you remove this information Windows will be unable to find and load critical system files and thus be unable to boot.

Such critical information is e.g. the list of device drivers needed for booting the system. This may include:

You can manually copy the backup files into %WINDIR%\System32\config\ to restore the registry data.

Not the answer you're looking for? Browse other questions tagged windows windows-registry or ask your own question.

3
Is it possible to import a Windows registry file without destroying a system?
0
What happens with these registry items…?
2
Linux crashed causing Windows virtualized (physical) partition registry corruption
1
Trying to fix Windows 7 PC after deleting a registry key for a class experiment
0
Delete Registry key denied
0
Need To Compare Files In Directory And Delete Similar Files (but it's more complicated than the norm)