Why do some AC adapters and power supplies generate a whining noise, and what can I do about it?

I have many different AC adapters and power supplies for a variety of devices, ranging from small 5V/1A USB chargers to laptop power adapters and desktop PSUs. However, I often hear a whining noise from some of these power supplies. This happens most often when they are not connected to a device or otherwise in use, and stop making noise when I connect a load to it such as by plugging in a device that is not fully charged.

Why do some AC adapters and power supplies make this whining noise? Why do some not make this noise? Is there anything I can do to suppress it?

Most power conversion devices contains coils, such as transformers or inductors. These components use electromagnetism to convert AC mains power to low-voltage DC power. The varying magnetic fields generated by these components can cause them to physically vibrate at high frequency, resulting in a high-pitched noise.

Most modern AC adapters are switched-mode power supplies. The internal switching frequency of an SMPS is typically low when unloaded and increases with load up to a certain point depending on the design. The no-load frequency is often low enough to be within the human hearing range. In addition, in low or no-load situations, the PWM used to regulate voltage at the inverter stage will be at a low duty cycle creating a "spikey" output profile which is more prone to causing vibration in coils, and the transformer itself will tend to vibrate as well (see Daniel R Hick's answer below for more details). Together, these can lead to audible noise especially in cheaper units which fail to suppress this noise.

Under load, a properly functioning SMPS should operate at a frequency well above the human hearing range, typically 50 kHz or higher (although some older designs operate at 33 kHz). However, the same noise can occur under load with a poorly designed or defective power supply as the coils may vibrate under electrical stress at a subharmonic frequency.

Coils used as inductors or transformers in other electronic devices, including those on motherboards, graphics cards, or other computer components, can also vibrate during operation. As such, a defective device can generate audible coil whine during operation.

This is why you sometimes see weird gobs of glue on coils inside electronic devices. The glue helps reduce the vibration and noise the coils generate during normal operation. It is entirely possible for users to apply glue onto coils using a glue gun to suppress coil whine, and people have successfully done so on their computer parts. However, you generally can't do this easily on small wall chargers of the sort you mentioned without risking damage to the charger or exposure to potentially dangerous voltages.

Ultimately, a whining noise isn't necessarily a sign of trouble in cheaper wall chargers when little or no power is being drawn from them. However, a computer PSU or laptop charger that generates coil noise especially when under load may be defective and you may want to consider replacing it.

More information on coil noise can be found in this Wikipedia article. 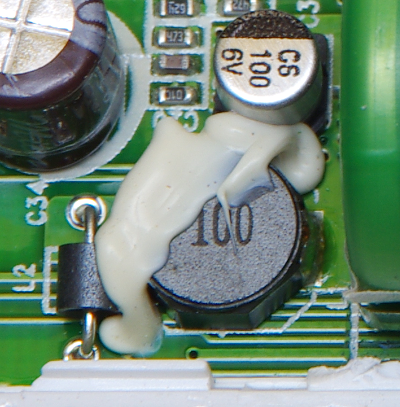 A "switching" power supply (like virtually all modern computer power supplies) works by "rectifying" the incoming 120V 60Hz (in the US) AC power into DC (at around 170 volts), "filtering" with capacitors, then using a semiconductor circuit to "chop" the DC voltage around 1000 times a second to turn it back into crude AC. (What's referred to as a "square wave", vs the "sine wave" of ordinary AC.) This "chopped" voltage then runs through a transformer to produce the desired output voltages. The outputs are again rectified to DC and filtered, to produce the desired voltages for the computer.

With this scheme, basic voltage regulation is performed by adjusting the "duty cycle" of the chopped voltage. When the power supply is lightly loaded the circuitry doesn't produce a nice symmetrical "square wave" but instead a series of narrow spikes, and that "spikey" waveform is more likely to produce annoying audible noise in the transformers and other components and is also more likely to produce "electrical noise" that you would, eg, hear in a nearby radio.

The transformers are created in part by gluing plates of metal together. The AC fields causes back and forth forces in the metal plates. As the transformer ages the plates begin to separate and allows for movement on the plates which vibrate causing the humming sound you hear.

Is there anything I can do to suppress it?

As they've already told you, glue, because

Another solution that wasn't mentioned (disclaimer: I haven't read ALL the comments...), and an environmental sound one! consists in unplugging the adapter (that's what I do all the time with the charger for my Nokia cellphone!)

I came to this page as I bought a new Craftsman C3 19.2 V Li-ion battery / charger which started making that whining noise as I plugged in. I came up to look for some answer, while reading it, I realized I had one or two wireless charging toothbrushes (Philips Sonicare and an Oral B) next to it. I moved the charger little away and the buzz went away. I presume the buzz is from electromagnetic interference from these wireless charging units that gets picked up by the transformers in the charger.

The adapter of my router was also making a high-pitched noise which was literally driving me crazy. However, I solved this quickly by wrapping it up in a piece of cloth. Now I do not hear it anymore.

KeyvanKeyvan
11
1
Add a comment  |
Highly active question. Earn 10 reputation (not counting the association bonus) in order to answer this question. The reputation requirement helps protect this question from spam and non-answer activity.

Not the answer you're looking for? Browse other questions tagged power-supply noise charger community-faq-proposed or ask your own question.

9
Why is the laptop charger thing (transformer) making a noise?
4
Power supply makes high frequency noise, is it damaging my battery? (or other parts of the computer)
2
Motherboard makes high-pitched chirping noise; will it stop by itself, or what do I need to do to fix it?
1
Squealing coming from laptop power supply?
0
Power Brick humming
0
My power supply whines, is there anything I can do about it?
12
My computer makes a odd buzzing noise when chrome is open
8
High-pitched noise from Logitech Performance MX
9
How to judge if a laptop charger noise is a safe "hum" or a dangerous "crackle"?
2
PSU Noise when turned off
See more linked questions

5
PSU makes a noise, Changing BIOS setting to shutdown on fan failure. Now the computer won't start
8
What could cause a desktop power supply to "hiss"?
1
Rattling noise like hard disk, but something else. What is it?
11
Using multiple power supplies in one PC
1
Buzzing noise coming from inside my computer while playing games
0
Only allow laptop to charge battery to 95%?
62
What happens when hardware tries to draw more power than power supply can provide?