Install linux on computer that can't boot from USB, but no CD/DVD available

I have a computer (A) that I want to install linux on. The bios on A does not recognize "booting from USB". I do not have access to a CD or DVD to create a boot disc. I do however have access to other computers, other hard drives, and several USBs.

Is there any way I can install linux on A given my situation?

If that is any help, A currently runs Windows XP.

Edit: Current situation Well I got linux mint running using unetbootin, but it's "live mode" and seems to exist on the same partition as windows xp, which is still there. When I, multiple times, tried to install the "real" linux mint from there (using the icon on the desktop), things seemed to have gone right (which means I should have linux installed on the partition that Windows sees as "E:"), but I can't boot up that one (does not show on boot options, or fron unetbootin). And trying to boot the old windows XP (which is still listed on boot) yields a BSOD crash. So I guess formatting E: did that, hehe...

Anyways, what can I do to proceed? What I have now is a frugal live install of Linux mint, with an installer that seems to be working but I can't find a way to access the fruit of its labors.

Edit 2 I'm trying to follow the grub4dos entry in this tutorial, but I see no menu.lst anywhere on the file system. neither does sudo find / menu.lst. So I still have frugal install of linux mint and nothing else I can boot to.

Final Edit I got angry with nothing working and went and bought a DVD-RW. Nevertheless, many of the solutions presented would probably have worked, and I guess everything messed up because I was rushing through it. I'll give the checkmark to the answer that got me the farthest. Thanks to all for the help.

You could use a bootloader that would let you load a USB drive - I've used plop before with an older system. You install the bootloader to your hard drive, use that to bootstrap an install off a USB drive.

You can then replace that bootloader with grub, and chainload windows off that. The nice thing with plop is that you can boot USB drives even on entirely unsupported systems. 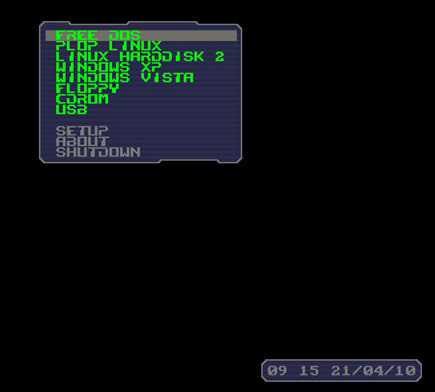 Another alternative I've used before is unetbootin - use an installer disk image that's supported, and it'll chainload that image from your windows bootloader. You can then use that to do the install.

First try using a different USB port since not all may work and check if BIOS indeed does not support booting from it.

Another method is PXE boot from network but check BIOS support also.

Other method is connect cdrom reader via usb if u have one.

Lastly I did a google search and here is a method to install ubuntu from windows without additional media: https://askubuntu.com/questions/59347/is-it-possible-to-install-ubuntu-without-a-cd-or-usb-drive

If you can remove the hard drive and mount it from a different computer, that's an easy way to do it. With modern compact laptops, accessing the internal hard drive is not always easy, but if you are lucky, there is a standard 2.5" drive behind two X screws that you can access from the side of the case, or sometimes the bottom.

It's been a few years since I last did this, but I recall creating a small partition for the installer, and then just copying it over with dd. This would have been back in the day of floppy-based Debian installs, but things may not have changed all that much. These days, I would create a bootable USB image and copy that over, mark the partition as bootable in fdisk, and go.

If you can get a hold of a USB cradle for your drive, that makes things a lot easier.

(I'm related to Serva development) Basically with Serva you create a PXE server on a secondary PC that connects to the target PC with an Ethernet cable, you boot the target from the network and the install process installs the OS bringing the OS components from the PXE server.

Not the answer you're looking for? Browse other questions tagged linux boot usb dvd or ask your own question.