No sound - "This device is being used by another application..."

From time to time i keep losing audio, sometimes pulling connectors out from motherboard sockets and back in does help, sometimes even system's restart does not until it's been done twice. Disabling audio device in audio manager doesn't help at all. Switching to another audio device does, sometimes both devices are affected.

Information about my system: PC (not laptop), Windows 8.1 x64, every update's been installed, MB: GIGABYTE GA-EP45T-UD3P Currently using Windows audio drivers, previously Realtek, no differences. The same problem is with USB audio devices, including headset and microphones, every usb port, but non another devices like for flash or exhdd'.

Software like Chrome, Skype, Steam are most of the time on, but seems none of them is behind this. I have tested all of my applications that could cause this problem, like Splash Pro, foobar2000, vlc, damn even Gimp, VMware, Rosetta stone, Notepad, and whatsoever, but the problems seems to pop up from nowhere with no good reason. I have scanned my system with Malwarebytes, Dr. Web, Kaspersky, nothing has been found. Did try Windows 7 (my previous system, everything's fine).

I can't figure it.

I can't believe you went to all the trouble of removing and replacing motherboard connectors!

To simplify things for others looking for the best solution, the easiest way is to: 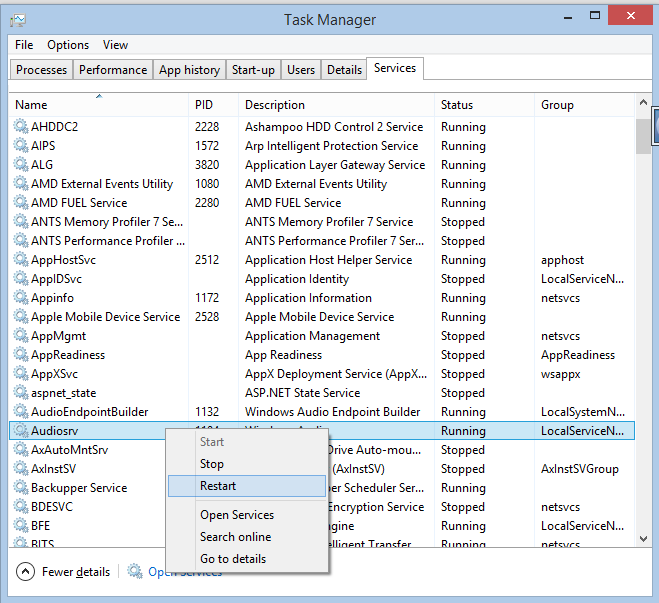 Or if you want to stop it happening to you again then: 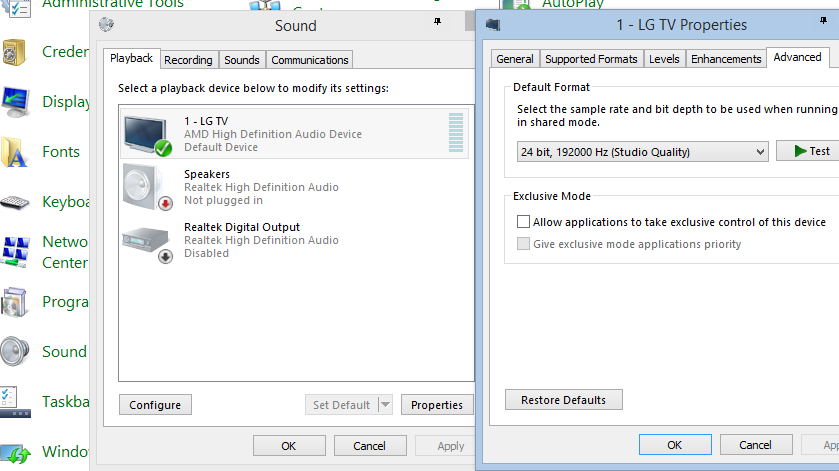 Found a temporary fix: Open up Windows search and search for "services.msc", find "Windows audio service" in the list, in the right pane, and restart it. This would return audio, so that you could avoid PC restart or other time-consuming tries.

I haven't found the cause, though.

Go to Device Manager, disable the audio device and enable it back again. That works like a charm for me, an instant fix, more like a workaround.

In Windows 7, I uninstalled all of the drivers then restarted the computer. As someone indicated in one of their answers, the computer will re-install the drivers when it restarts. All sound was back after that.

In my case for some reason, I didn't have the native (Realtek) drivers installed, only AMD drivers for video card which also have HDMI support. So after installing the soundcard's original drivers, the sound started working over HDMI.

I have logitech headphones and I had the same problem. For anyone that may have the same problem as stated and has logitech headphones, what worked for me is to go tou control panel->hardware and sound->sound->playback devices->properties on my headphones->properties again on the general page->Driver->Uninstal device. I then unplugged and plugged my headphones and they started working again. Why does this work? Idk, I was just expirementing and it worked. I also checked the box to unistal the driver with the device, so perhaps it was a driver fault.

Not the answer you're looking for? Browse other questions tagged windows-8 audio windows-8.1 or ask your own question.