My neighbour rang me this morning to tell me that she couldn't access the Internet so I agreed to have a look at it for them. The machine is an aging Sony Vaio running Windows Vista (didn't note what SP)

Turns out there's no problem with the Internet per se but it only manifests it when they try to use Chrome.

What I've not tried:

They're not wedded to the idea of using Chrome, they probably just installed it on the search engine's recommendation one day and they've just grown used to it. For their needs IE will function identically but I'm just curious to know what it is it could be (more for professional curiosity than anything else at this stage)

I've seen this question but it doesn't answer my issue 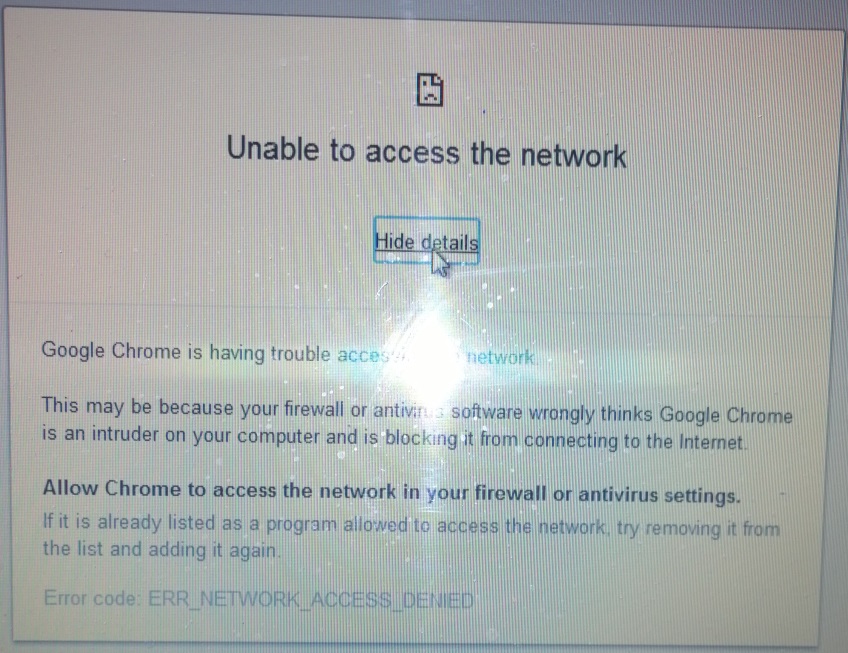 The error code shown is : ERR_NETWORK_ACCESS_DENIED

I would recommend trying turning the firewall off, and make sure she hasn't got any other non Windows firewalls installed. Then see if it works, if it doesn't you at least know it's not down to the Firewall itself. If it is then you have a new line of enquiry... You could also try doing a reboot with non-Microsoft services objects are disabled as well as a selective startup disabling startup items. This should rule out any background processes causing you grief.

Personally, if you don't want to waste too much time on it, I would consider installing Firefox on the machine for her instead of Chrome, I know it's not a solution, but it is a lot better than forcing her to use Internet Explorer.

Thanks for clarifying that, I can suggest one more thing, but it might not be the most useful suggestion, using procmon you could check to see what Chrome is actually doing when requesting pages, because from the sounds of it is doing something it shouldn't be. But since this will show you a lot of information it could take you a while to figure anything useful out. I would at this point refer back to my previous response "replace it with Firefox"... Good luck!

Not the answer you're looking for? Browse other questions tagged networking google-chrome windows-vista internet-explorer internet-connection or ask your own question.

3
Internet Explorer connects to the Internet but Chrome does not