Make a bootable Windows10 32 bit flash drive (size 4 GB) but it does not seem to be working. How can I restore it to its original factory state and make it a bootable drive? Thanks!

Things I have tried and what went wrong:

The current state of the drive, as seen my DiskPart is: 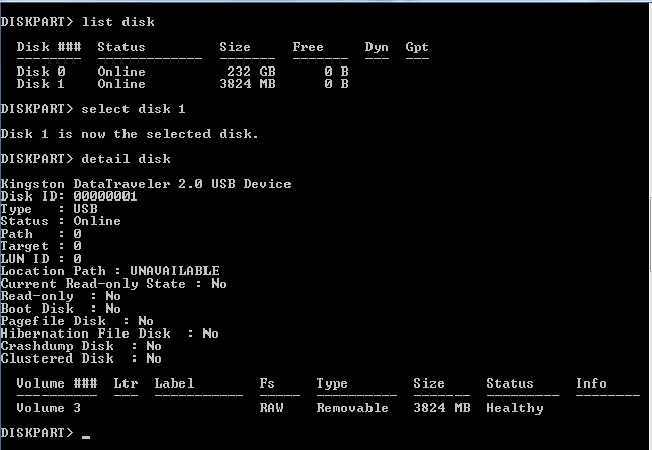 Your USB drive isn't ruined; it simply needs a new primary partition. This can easily be fixed in DISKPART using the CREATE PARTITION PRIMARY command.

From DISKPART (Run with Administrator Priveleges)

YUMI http://www.pendrivelinux.com/yumi-multiboot-usb-creator/ can be used to make a Windows 10 install USB drive.

Not the answer you're looking for? Browse other questions tagged windows-7 partitioning usb-flash-drive bootable-media or ask your own question.

3
Is there a way to make a USB 3.0 flash drive bootable to Windows?
6
USB flash drive cannot be read only on a specific computer
1
Rufus nor any other software can fix my 16GB usb drive after using RUFUS
6
How to clear current “read-only” state on a USB flash drive I setup with Rufus?
0
Capacity of 8GB flash drive shown in file manager is less than the actual
5
How to install DBAN (Darik's Boot and Nuke) on an USB flash drive larger than 4GB and make it bootable on an UEFI-equipped PC?
1
Create USB flash drive with two partitions: first to boot, second to store data - for Windows, not Linux