For external hard drives in this question, I'm referring to traditional HDDs; the kind with spinning metal inside of them (no RAM or flash-based super-high-performance hardware):

Is there a significant speed difference between USB 2.0 and FireWire 400 for external HDDs? And, while we're here, eSATA and FireWire 800? Sure you can just google the bus speed numbers, but can traditional HDDs even keep up with any of them?

Traditional hard drives (7200 RPM) are much faster than the USB standard allows for. You can prove it by taking a decent hard drive and plugging it in natively, and testing it, and then testing it in a USB caddy.

Since eSATA and Firewire (400/800) are both significantly quicker than USB, I'd be willing to bet they are reasonably close in speed to what sort of speeds you'd see from a natively plugged in drive. eSATA especially - since isn't it meant to be an external version of a native sata controller?

It's hardly scientific, but my experiences with Firewire 400, 800 and USB 2 on various Intel Macs (laptops and iMacs) is that FW400 is noticeably faster than USB 2, and FW800 is getting-on for internal drive speeds.

Daily, I copy around various 16-25Gb files (virtual machines) and would always pick FW800 (or 400) over USB2. For a while I was regularly copying a 16Gb file from one FW800 to another (they were daisy-chained together) and it was just like copying between 2 internal hard drives.

I appreciate that FW400 might be a different beast on Windows, of course.

I'm chiming in a bit late, but... the bus speeds that the various protocols are rated at are no good indication of the real speed you might expect. For example, USB has a lot of overhead (by design), and with most control chips I've come across USB 2.0 is actually no faster than Firewire 400 (no numbers at hand, hope you'll take it as anecdotal evidence from me...).

A couple of years ago, USB 2.0 was in fact the slower of those two, due to the fact that it requires more CPU backing, but now that we have dual-core CPUs and fast internal buses everywhere, you won't find any difference anymore.

For a quick overview of realistic throughput you might expect, see the site of the S-ATA SIG. That's of course hardly independent data given that they defined the e-SATA standard, but I'd say they're actually quite optimistic about USB 2.0: their quoted 45MB/s is something I've never, ever seen in my own use - 32MB/s tops, really. 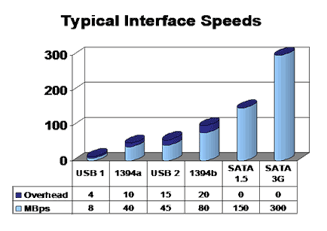 Firewire loves you, but some times you need USB. (Because people are cheap and buy cheap machines, you know).

If you're buying a case/dock, I'd go for one with:

So you have the best of Firewire and eSATA, but you can still plug your drive to your 20th century friends' machines. (As long as you formatted it as FAT32, I suppose.)

Yes it costs thrice the price of a USB-only case. You get what you pay for.

Sadly I never had the chance to use eSATA, but as pointed by others, it should perform similarly to SATA, which is great.

From a users perspective I have found USB2 better than firewire as there are more devices available. For raw speed firewire 800 is excellent. I haven't used eSATA though, and I feel it will probably end up being THE standard.

One of the big advances of FW is that it is a peer-to-peer protocol. Which means you can make a daisychain with 4 computers and 5 hard drives, and still get it to work. You can have problems when 2 systems write the same file at the same time, but FW is much more flexible.

Not the answer you're looking for? Browse other questions tagged hard-drive usb performance storage firewire or ask your own question.