What do you call a keyboard with a bar-shaped Enter key?

I'm a programmer, and a touch-typist, and so type best when the keys I use are where I expect them to be. Perhaps because I'm American, and do most of my work on Apple computers, I expect the keyboard to have a bar-shaped Enter key, a backslash/pipe key immediately above the enter key, and a bar-shaped backspace key: 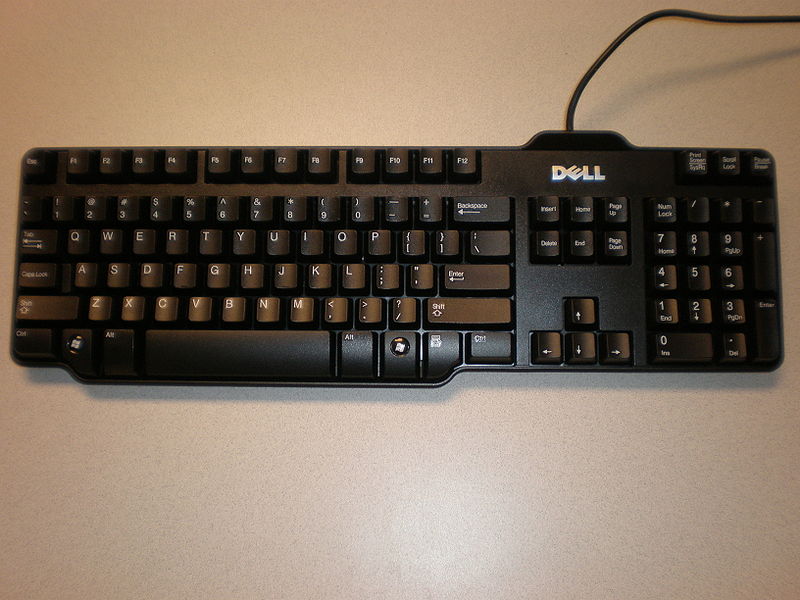 Unfortunately, when I order new (non-Apple) equipment I often receive keyboards with a completely different L-shaped return key, the backslash/pipe key placed in the top row, and a teenie backspace key:

Keyboards like this drive me nuts, and I'd like to avoid them as much as possible. However, here's the problem: I don't know what to call the keyboard layout that I prefer, so I can't read a computer's specs and know whether it includes a "good" keyboard.

Without a specific term for this type of keyboard, I'm reduced to examining any image I can see of the keyboard, looking for the shape of the return key. Even then, I'll sometimes see a "good" keyboard in the marketing material, but when my order actually arrives it will include a "bad" keyboard. (BTW, I'm sure there are those who love L-shaped return keys, and I mean no disrespect by calling such keyboards "bad", but when evaluated in the light of my personal needs that is what they are.)

They're all QWERTY keyboards, but is there a keyboard layout name which specifies what I want?

The Gateway keyboard in your image is definitely not the British/UK keyboard layout (as mentioned in the other answer), which doesn't only have different symbol positions but also different key shapes. Its Enter ↵ key is a mirrored ⨼ L shape like the symbol ↵ instead of a 180°-rotated one Ꞁ like on the ISO, UK and German keyboards. It has the Backwards-L layout and the bar-shaped version has the ANSI layout

A "backwards-L shaped" (or just "L-shaped") Return key is the union of the ISO and ANSI Return keys. The key is often called Big-ass Enter because of its size, or Asian enter because it is found on many East Asian keyboards.

There have been studies that have shown it to be easier to hit accurately than the ISO and ANSI Return keys.

However, with the backwards-L shaped Return key, the \ key has to be relocated, often at the expense of having a smaller backspace or right shift key.

Many many people call it the J-shaped enter key as well. Here is the real US keyboard with that layout 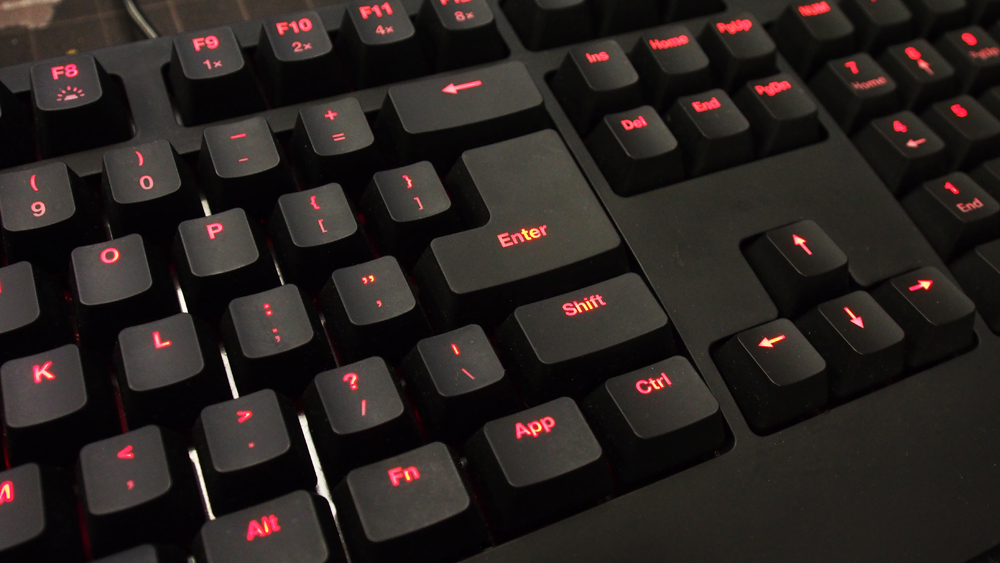 When you see the single-row Enter key, that is the US-ANSI layout. IBM suffered terribly when it added an extra key between Left-Shift and Z on the Selectric III, so when it came to designing the Extended Layout with which most of us are now familiar, someone recognised the folly of the Selectric III and suggested cutting the large enter key in half to accommodate the \ key.

On ISO keyboards, the Enter key is usually still the size of the ANSI Enter plus the \ key and, prior to MS messing up the bottom row with the Windows keys, the \ was often placed in the single space position between Ctrl and Alt. Since the introduction of Windows keys, the placement of \ on ISO keyboards has wandered. Sometimes, the Enter key is narrowed at the bottom so that \ can sit beside “. Sometimes the Backspace key is halved so that \ sits beside =. The last and least desired placement is back in that increasingly annoying position of between Left-Shift and Z.

What's the advantage of a L-shaped "enter" key vs. a regular (one-row high) "enter" key?

IIRC in the past (like 15-20 years ago or more) I've always seen the backwards-L enter key in my country (Vietnam), which uses standard US keyboard layout. On most keyboards the backslash is put on the left of R-Shift key like in the first image, which results in a better typing experience since no keys are too small. On some others it's moved to the left of backspace, resulting in a tiny square backslash key without text label, only a symbol like in the below image. And then when laptops became more common the desktop keyboards began changing to the ANSI rectangular enter key like that. 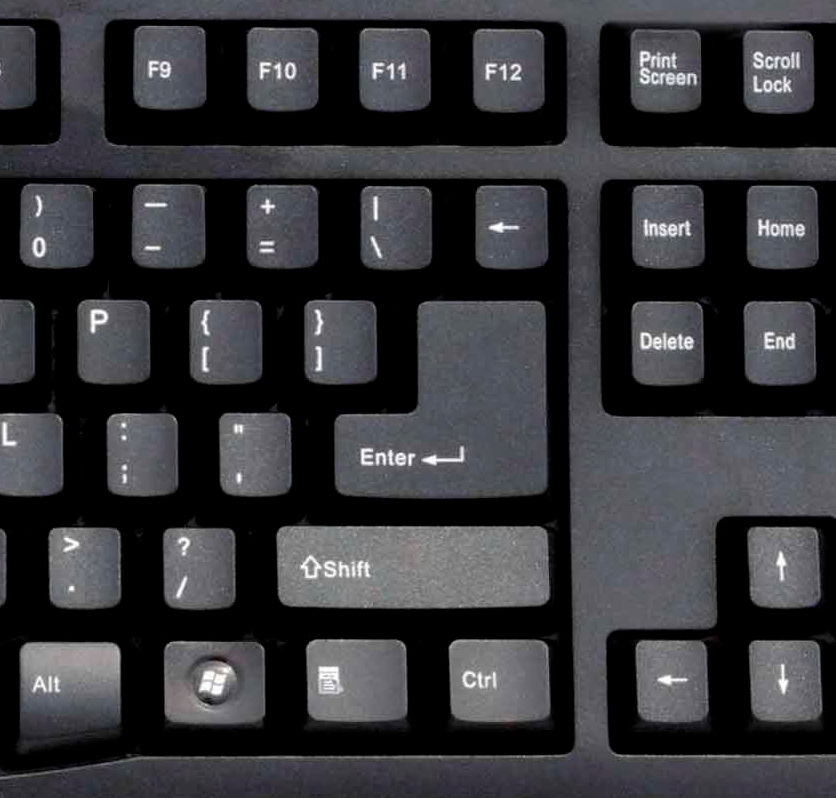 A little bit of my own history: I remembered around 1995-1997 I went to my uncle's house and while playing some spacecraft shooting game I realized that there are 2 similar keys named ← (as you can see in the big-ass keyboard above). I tried pressing the upper one (which turns out to be the backspace) to see if it moves left or not and suddenly I got a much stronger weapon and easily passed level 5, which no one could do before

While searching on the internet I also find a strange layout where the backslash is moved to the right of the R-Shift key. I don't think anyone will be a fan of this, since typing a backslash is now too hard

FYI Apple did produce keyboards in backwards-L layout like that

Here is a detailed comparison between layouts

A comparison of common mechanical computer keyboard layouts. Keys that are not present in them all are highlighted in pink (alphanumeric) and dark-grey (modifier). Keys that are sometimes omitted are shown with interrupted outlines. Note that the 104th key on the ABNT layout is located in the numpad section and therefore not visible. From left to right, top to bottom:

The second version is common in Asia and Russia, which explains why I saw them a lot in the past

In my experience the US layout is much more common on laptops (though, I have a British layout Thinkpad), and most English language desktop keyboards outside the UK seem to have bar-style enter keys.

Not the answer you're looking for? Browse other questions tagged keyboard keyboard-layout carriage-return or ask your own question.

6
Numpad's Enter key is acting like the Command key instead
0
What is the different between enter and return key in Mac 128K?
1
Remap Windows-Key on Apple USB Keyboard
0
Can I type backslash with UK extended keyboard (virtual) layout and US physical hardware
4
What keyboard layout has a cedilla Ç next to the Enter key?
1
How to type Japanese with kana input in a たていすかん (109-key) layout using a 104-key ANSI layout
1
How to use my Apple Keyboard on Windows 10?
0
What keyboard layout is used by Logitech in Poland?