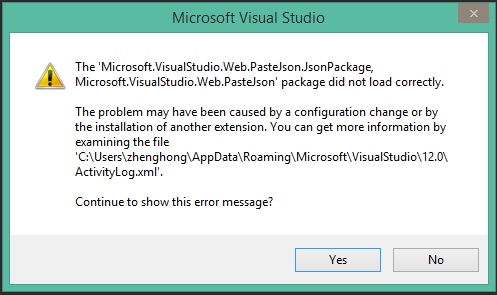 After choosing that I want this message to continue being displayed, Visual Studio would attempt to launch the solution, only to throw an error message saying that the solution couldn't be opened and crashing afterwards. I've tried everything that I could find on Google, but nothing works. I've tried various commands, I've tried deleting AppData and ProgramData. I've uninstalled all of Visual Studio only to reinstall it and find the same error message after reinstalling it. Apparently Update 4 was not uninstalled after I reinstalled.

Needless to say, I am rather frustrated at this point and have no idea what to do. I suppose the next logical step to take would be to uninstall update 4 and see what happens so that's what I am going to try. Has anyone else experienced this problem and been able to fix it by reinstalling the update?