Improve display of whitespace on notepad++

Can you improve the visibility of whitespace using notepad++?

I tried Settings > Style > Whitespace Symbol, and am able to change the color as needed, but I still find the symbols incredibly small and hard to find.

My resolution is 1280x, so that might be a contributing factor, but there should be a way of replacing the symbol with something more visible than a tiny dot (perhaps a differently colored plus-sign). Is there a way?

Based on this discussion I found there are two ways to increase the whitespace character size by sending commands to Scintilla which is the underlying editor component that Notepad++ is using. In the example below I have set the size to 3 which has increased the size of the dot rendered from 1 x 1 pixels to 3 x 3 pixels:

Note that there seems to be a bug because the character is not centered, so you may have to experiment with the value based on what font size you are using.

It is also possible to do it purely with macros and no extra plugins. You could edit the shortcuts.xml file in %AppData%\Notepad++ using notepad and add the following before the closing </Macros> tag:

This will give you a new macro called Increase Whitespace Size which will do the same thing as the Python script. It will show up under the Macro menu and can be given a shortcut using the Shortcut Mapper.

The OP explicitly said they can change the color, but color wasn't enough.

For me, color would be enough to achieve OP's goal of

Improve display of whitespace on notepad++

To change color, as it says here:

The colour for both can be set from the Styler Configurator, Global styles, White space symbol. 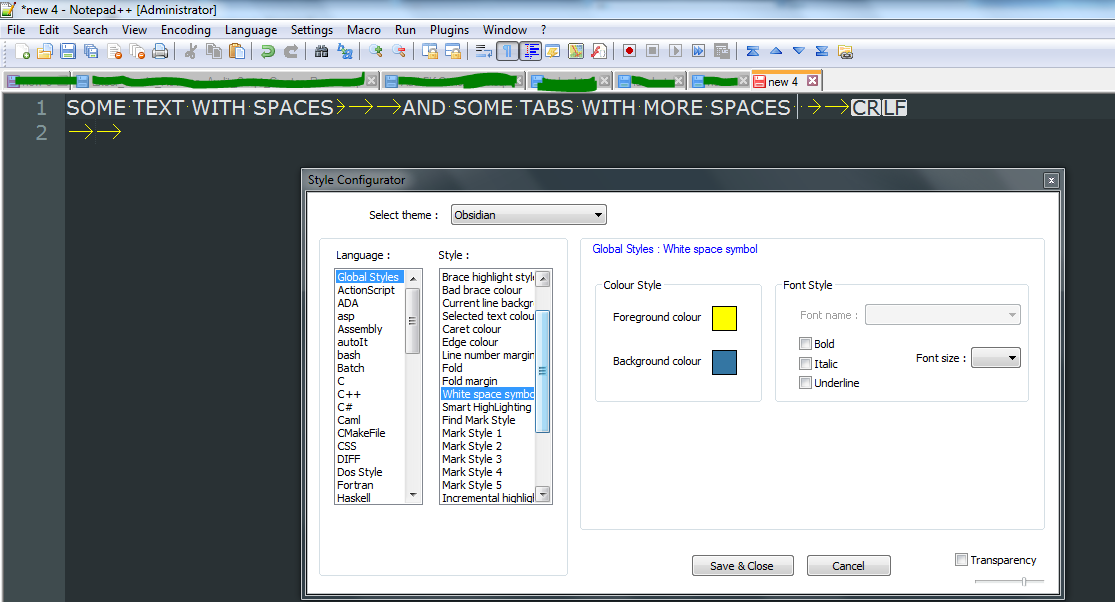 Not the answer you're looking for? Browse other questions tagged notepad++ whitespace or ask your own question.