What is a PCI-Express Lane?

I am reading an article bemoaning i7-5820K Will Only Have 28 PCI-Express Lanes compared to its sibling processors having 40 lanes.

Isn't 28 lanes already too many? How many lanes would a normal home PC actually need and for what purposes?

I don't know how the following would be connected to PCIe, but do they even number 28?

What else possibilities would need direct access to PCIe for a home/office PC? Or even a server.

Many devices use more than 1 lane.

Many gigabit network adapters use PCIe x4, there are also 10-gigabit server adapters and they use PCIe x8.

Here is an image from Wikipedia PCIe article. I added information about lanes on these PCIe slots. 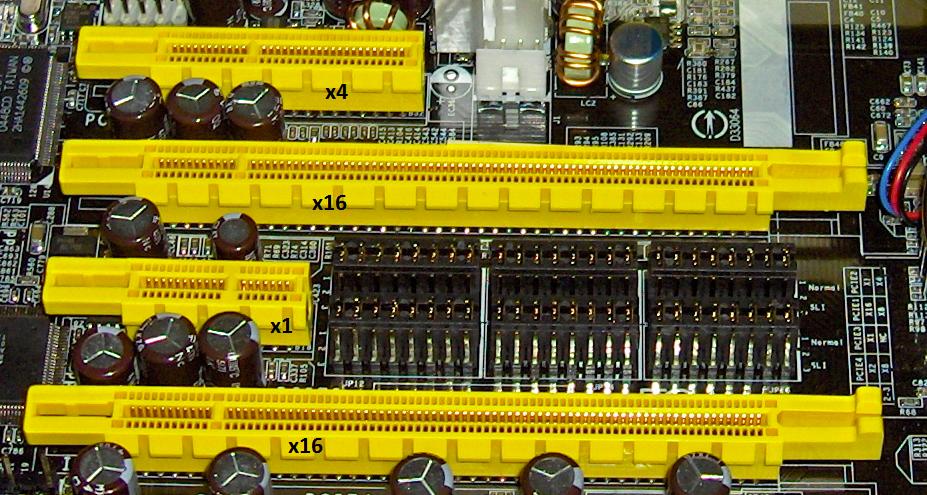 You can read more in another answer written by reirab.

A PCIe 'lane' consists of 2 differential pairs of signals. One differential pair is used for sending and the other is used for receiving, which allows simultaneous bi-directional communication. Each lane is point-to-point. That is, each lane directly attaches a single host to a single device. PCIe switches can, however, be used when a host lane needs to be shared between multiple devices. Per Wikipedia, the bandwidth of a single PCIe lane (in each direction) is as follows:

As Kamil said, most PCIe devices use multiple lanes. Some devices, such as NICs, sound cards, and other relatively low-bandwidth devices just use 1 lane. SSDs, RAID controllers, and other medium-bandwidth devices typically use 4 or 8 lanes. Graphics cards and other high-bandwidth devices (FPGAs, for instance) typically use 16 lanes. At system boot, the host and device will negotiate the number of lanes that will be used for a particular connection. Typically, the smaller of either the number of lanes that the card is wired for and the number of lanes that the slot it's installed in is wired for (i.e. the maximum physically possible) will be negotiated, though the number may be less in cases where so many PCIe devices are installed that the host does not have enough lanes to give each of them its maximum. The physical slots are designed such that devices with connectors for a smaller number of physical lanes will fit in and function properly in larger slots (e.g. a PCIe x4 card will fit in a PCIe x16 slot and will negotiate to run with 4 lanes.)

Also, some chipsets use some of the PCIe lanes to attach the Southbridge. This was how the Intel x58 chipset worked (the chipset for the Bloomfield chips, high-end of the first-generation Core i7 processors.) It used 4 lanes to attach the Southbridge, leaving 36 lanes for everything else. This typically was divided up as 2 16-lane links for graphics cards and 4 lanes for any other devices. Boards that supported 3 or 4 graphics cards would have to reduce some or all of the graphics cards to 8 lanes when 3 or 4 graphics boards were installed.

Having 2 graphics cards is very common in gaming systems and many gaming systems actually have 3 or 4 graphics cards. Even in a 2-card setup, at least one card will have to fall back to x8 mode in a system with only 28 lanes available. Additionally, systems that use graphics cards as computational accelerators often have 2-4 graphics cards installed. For these situations, only having 28 lanes is a problem, as that greatly limits the amount of host-to-device (and device-to-host) bandwidth available to each card. CUDA in particular has been gaining widespread popularity over the last several years, especially in the high-performance computing community. The PCIe bus can very easily become the bottleneck in GPGPU (General-Purpose computing on Graphics Processing Units) applications, so having as many lanes per card as possible is highly desirable in GPGPU systems.

A PCIe lane is a pair of high speed differential serial connections, one in each direction. A link between devices can be and often is made up of multiple lanes for higher data rates. The data rates of individual lanes also varies by generation, roughly speaking one lane of Gen x provides about the same data rate as two lanes of Gen x-1.

Motherboard vendors have to decide how to allocate the lanes provided by the CPU and PCH to the onboard devices and slots. They can and often do include signal switches to give the user some options but there is a limit to how much signal switching can be affordably implemented.

However when building a high end system with 3+GPUs (or possiblly two top of the lines GPUs), lots of fast storage and/or very fast network interfaces more lanes are desirable. If you want to give each device it's maximum possible capacity you are looking at 16 lanes per GPU,

So for those with higher end needs Intel has a high end desktop socket, currently LGA2066. This socket also covers single socket workstation/server systems, though it seems officially at least you can't use the workstation/server processors in most desktop boards.

Unfortunately while with previous generations of high end desktop the number of PCIe lanes and ram channels was fixed, with LGA2066 the number varies by the processor you select. A desktop LGA2066 CPU can have 16, 28 or 44 PCIe lanes.

This puts motherboard vendors in a tricky position, they have to decide how they will handle giving the true high end customers the full functionality of their CPU while deciding what to disable or throttle for those with lower-end CPUs. System builders in turn must carefully read the manuals for the motherboards to find out what the limitations are before buying.

Grabbing the manual for a high end X299 board https://dlcdnets.asus.com/pub/ASUS/mb/LGA2066/ROG_RAMPAGE_VI_EXTREME_OMEGA/E15119_ROG_RAMPAGE_VI_EXTREME_OMEGA_UM_V2_WEB.pdf it seems they have decided not to support the 16 lane parts at all. This board does let you use three GPUs on a 28 lane CPU, but the second m.2 slot and the u.2 connector are only available with 44 lane CPUs

Not the answer you're looking for? Browse other questions tagged cpu pci-express intel-core-i7 or ask your own question.

1
What type of PCIe slot can the new PCIe SSD drives work with?