I'm facing a strange issue running Xubuntu (tried Ubuntu also, same problem with Unity, but no problem with Metacity) on Xen HVM while connecting to it via XEN's builtin VNC. Some parts of the user interface appear with artifacts: 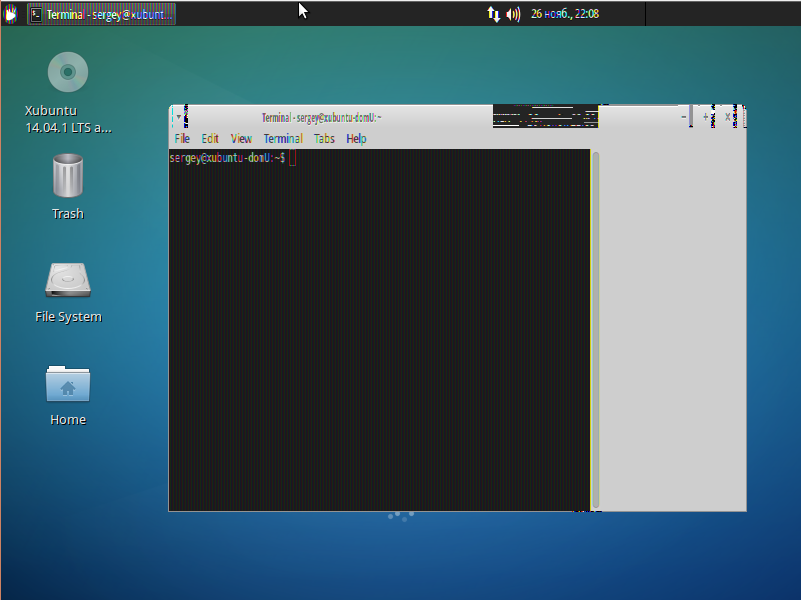 Most other things, including most programs, menus, the desktop are rendered normally, but the Terminal, the top status bar are rendered with issues. Terminal is practically unusable, so I have to connect by SSH to control the box. Have anyone ever seen something like this?

So far I tried, with no success:

The problem persists, and from what I tried, only the Terminal, the top bar, and few other things like "Identify monitor" baloon are affected.

UPDATE: Kind of solved it by adding nomodeset to kernel arguments at boot, now the only thing which is rendered with artifacts is the desktop wallpaper...

UPDATE 2: Since a software VNC server running inside the target OS shows same graphics distortion, it's probably not a video driver issue, though I'm not 100% sure

5
How to avoid ugly dithering when running KDE over VNC?
1
How do I fix my VNC setup?
0
How to establish fully gpu-accelerated session to localhost xen virtual machine via RDP or VNC?
0
VNC: connection timeout
4
VNC : Console does not accept any keyboard/mouse inputs
1
Why does VNC work when my laptop has no picture on the internal or external display?