Before I say anything at all, I want you all to know where I've been with this issue:

Here are my System Specs:

What I have found out using poolmon is that I have a driver or something else that is not releasing frees and is steadily increasing named "Proc". 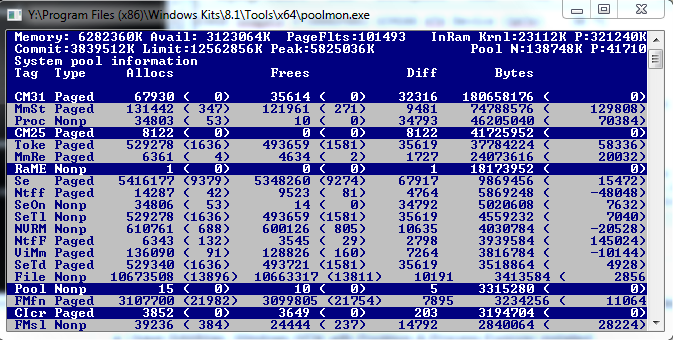 As you can see, Proc has a whopping 10 frees and 46205040 bytes being used. And that number is always climbing.

What I have found from pooltag.txt (if anyone is reading this and is interested as to where to find this file, you can look here: Y:\Program Files (x86)\Windows Kits\8.1\Debuggers\x64\triage), is this description: "Proc - nt!ps - Process objects", which is pretty uninformative given the generic description. Either way, this issue seems to compound when I run a highly intensive process (such as World of Warcraft which normally takes up 1.6GB of RAM).

When that process is ended, RAM usage remain as if the program never closed. When I look at RAM map, sometimes over 1.5GB is remaining in standby. Even when I clear it in RAMMap, it does not clear it and that ram is not freed up to be reused. 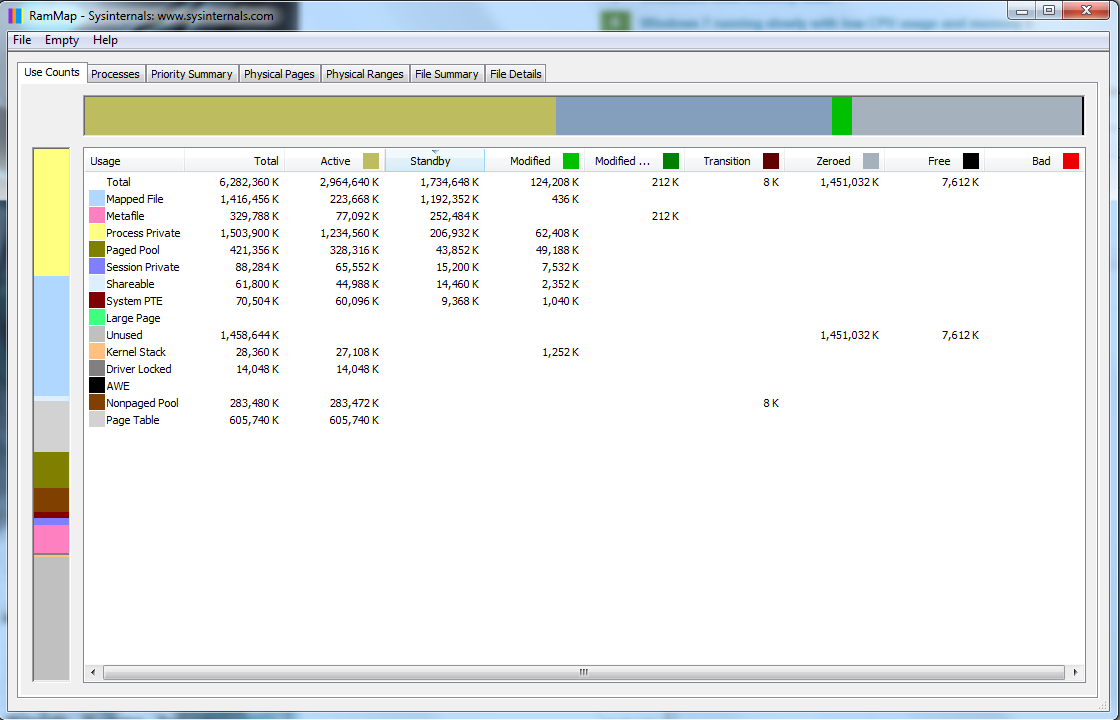 As you can see here, I have 2.9GB used (due to Firefox, Skype and a few other programs), but I have over 1.5GB in standby that is unused, and TaskManager & Process Explorer report that I'm using closer to 4GB.

One more issue that I've been noticing: I had updated my Ethernet Drivers due to some lag issues I was experiencing with my internet (had a modem replaced and then updated them). The problem went away. I left for Thanksgiving for about a week, at which time my computer was off. When I returned home, I noticed that process: "svchost -k LocalSystemNetworkRestricted", "svchost -k netsvcs" would at times be using over 500-700MBs of RAM, which I had never seen before. Right now it is sitting around 164MB, but I had not even seen it come up near that number before I left.

I looked over all the programs, uninstalled a few that I had installed before I left, then did virus scans which removed some more stuff, and even rolled back my Ethernet driver. The only updates I had for Windows 7 were for Windows Defender (which I have subsequently disabled). Yet this strange behavior remains.

Please let me know if anyone can help me.

I'm going to go through this pretty detailed just in-case someone else may have the same issue at one time and finds this and it works for them.

I had ESET SmartSecurity 4 installed, as well as True Image Home 2013 by Acronis. I ended up using Driver Verifier (Just type in Verifier into your start bar. CAUTION: Can cause you to experience bluescreens if a driver is acting up. Please make a system restore point and have a Windows Recovery Disk handy to use or make sure you can get into safe mode and disable it via Commandline: verifier /reset).

So it detected a faulty driver after I disabled the Acronis TIB Mounter device, which is the device that mounts TIB backups in use with their "Before Boot" software which installs on your system and also seems to control all of the functionality of your USB drives as well, which I did not know. This driver which was from Acronis was called fltserv.sys (Located: C:\Windows\System32\drivers\fltsrv.sys). I ended up in an endless bluescreen loop, but also couldn't boot to Safe Mode because I had disabled the TIB mounter, which allows the program to control safemode boot (it does this I guess to be able to make a backup no matter what the status of your Windows Installation).

So I booted up my Windows Repair USB, and after about 2 hours of trying FIXMBR and SFC /scannow and other various things, I opened up Driver Verifier (do this by just typing verifier in the recovery CMD), just for kicks, to disable it. Since my recovery disk wouldn't let me access the Windows drive to just delete the .sys file, I figured I was out of luck at this point. I pressed the "Display information about the current verified drivers" button and hit next. I just decided to hit the "Add" button below the right pane, and what do you know, it pops open an explorer window which allows you to see .sys files. So I navigated to its path, deleted it, rebooted, and was able to login.

Once that was done, I was having major CPU issues, so I uninstalled my ESET Smart Security, disabled Driver Verifier, and restarted. I installed Eset Smart Security 8, and everything seems to be good now. As far as I can tell, my memory is sitting pretty stable with Firefox and a few other programs open at about 2.7GB. I'll probably go over Poolmon again if I have issues.

Quite a journey. I'm not precisely sure if it was Acronis or ESET that was the culprit, but at least my issue is gone.

Here are the current running processes and the detailed ram usage from ProcessExplorer: 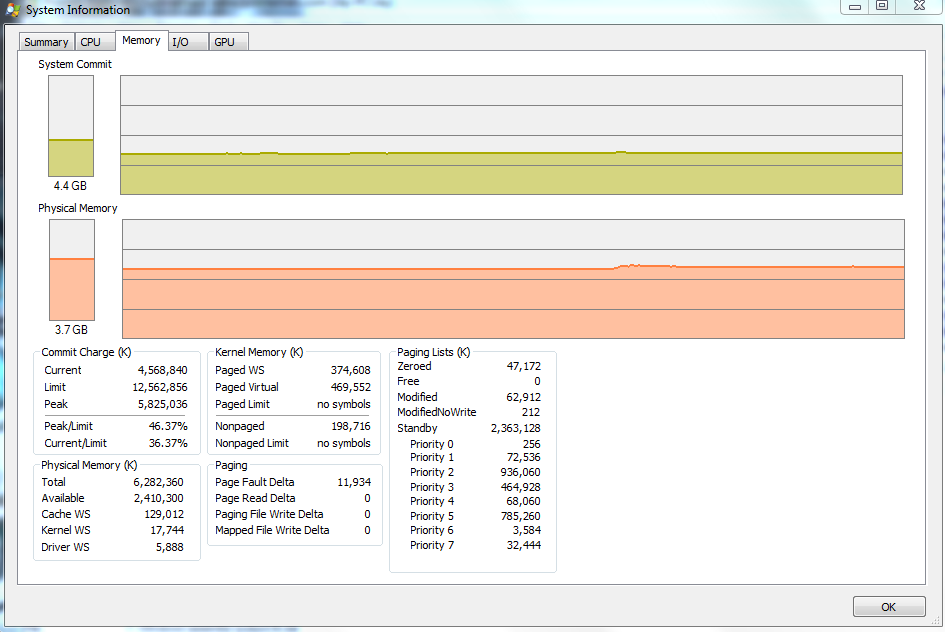 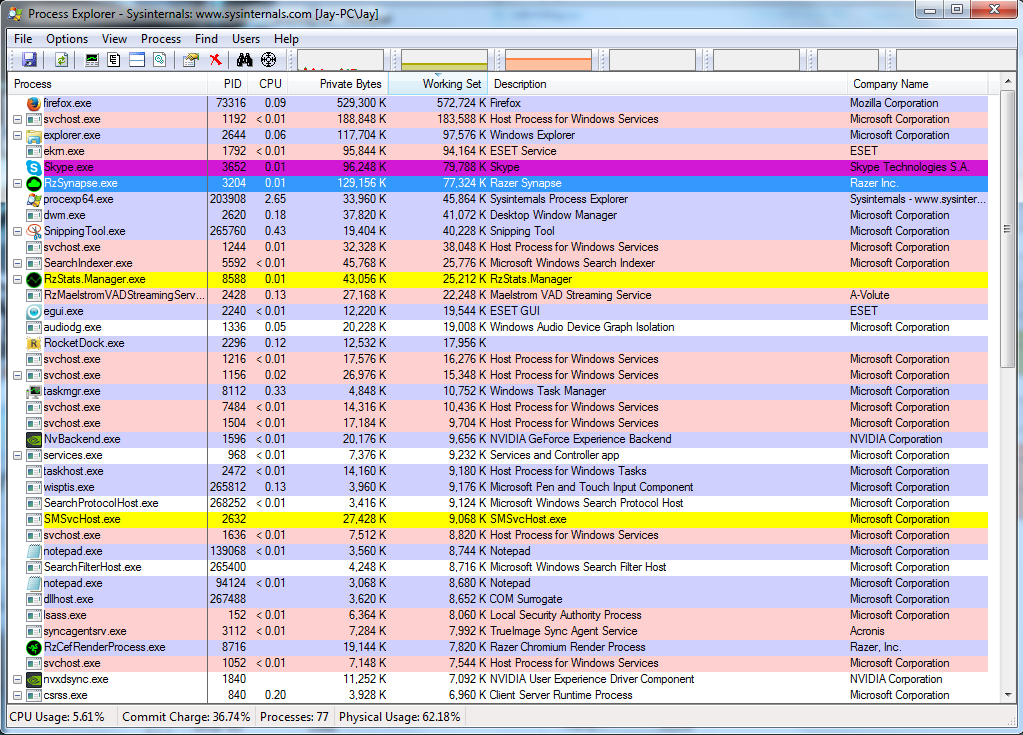 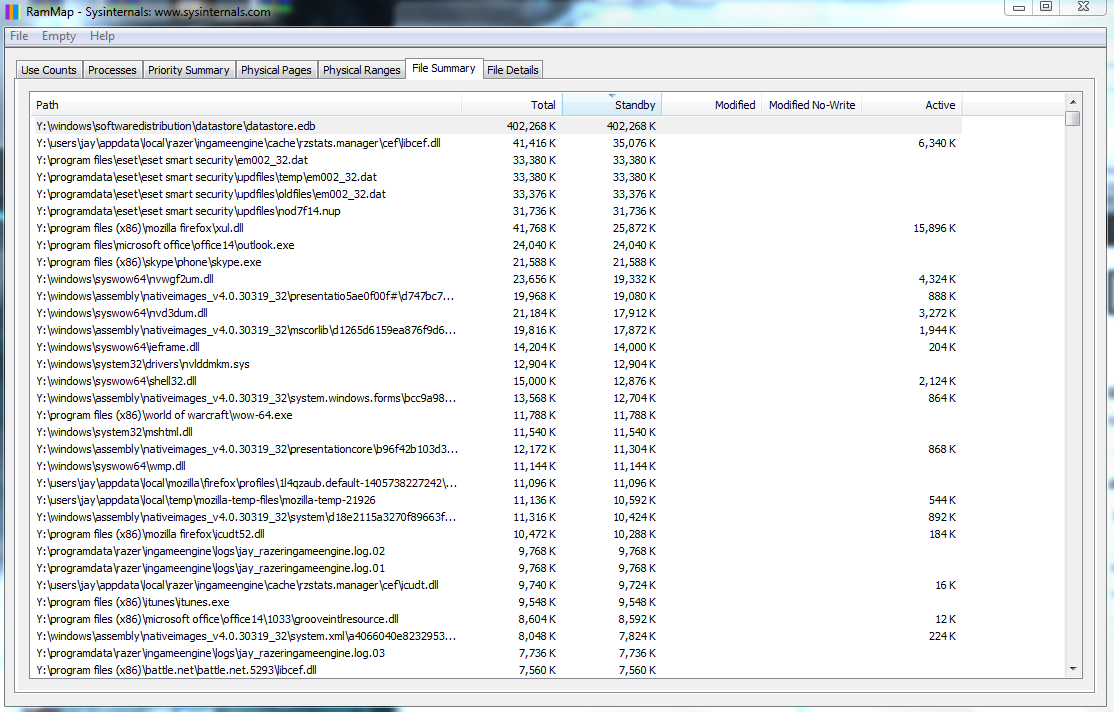 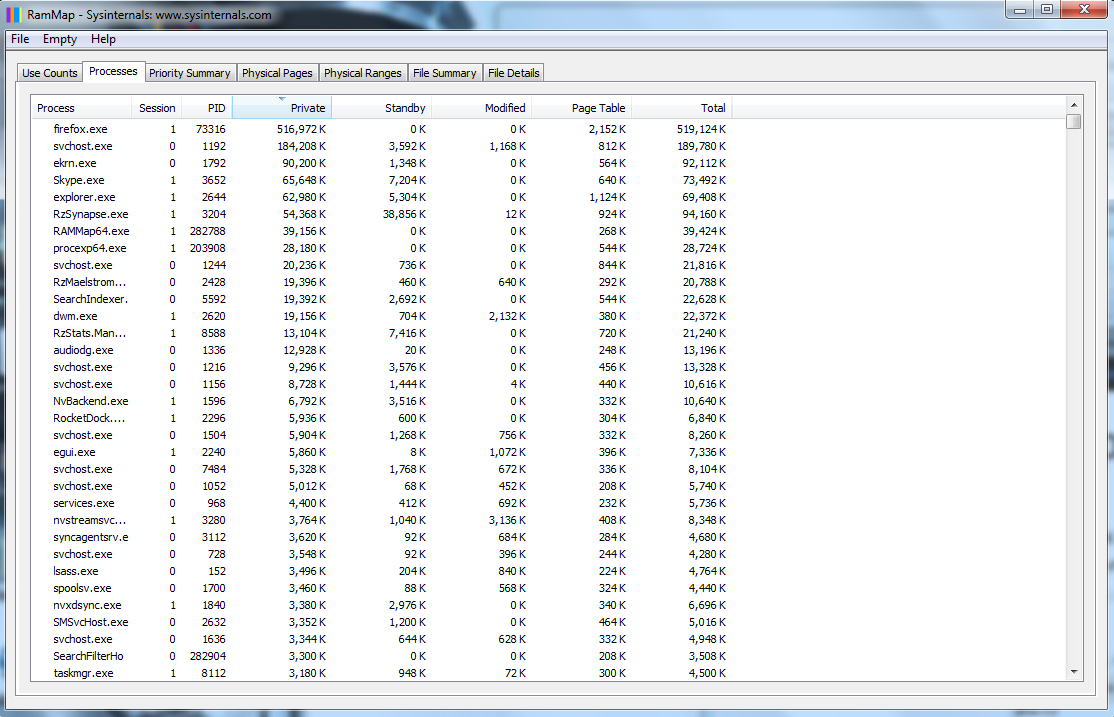 I have over 1.5GB in standby that is unused

The 1.5GB you refer to is tagged Unused not Standby. This 1.5GB memory is Zeroed

Pages of physical ram not actively being used. These are still left in physical ram but will be repurposed first by the memory manager (either returned to the active list or zeroed out and reused) if something needs physical ram for active pages. Standby pages are essentially cache – it’s better to have infrequently used data kept in RAM “just in case” than pushing it out to disk when the memory isn’t needed for anything else.

Pages that have been zeroed out and are ready to be used – they can be quickly allocated for new physical memory allocations. You will usually only see a significant amount of Zeroed pages after a system is booted. After the system has “settled in” you will likely see these pages being put to good use somewhere on the Standby list as cache.

Not the answer you're looking for? Browse other questions tagged windows-7 memory drivers performance or ask your own question.

0
Why does Windows 7 x64 take so much RAM after closing all the RAM intensive programs?
10
How to find source of memory leak in Windows 7?
2
Windows 8.1 memory leak which is invisible in process monitor and poolmon
1
Windows drivers hogging 4GB of RAM: How do I find out which driver it is?
2
RamMap can't see what takes up memory
0
Ram- Modified Page List using all memory
4
Windows 10 slowly increases RAM usage on 2 different PCs