Or is there anything about the size reduction of a MicroSD card that makes it perform better or worse?

Similarly if you take that MicroSD card, and place it in a MicroSD-to-full-size-SD converter (from the same manufacturer), will it perform identically to the equivalent full size SD card?

BTW, on the packaging, the specs are identical, but I'm interested in knowing if, in the real world, there are any performance differences.

There is no direct relationship between the physical size and performance.

The form factor defines the size of the plastic shell. What is inside is based on the same chip manufacturing technology. Technology improvements, in the industry overall or by a specific chip manufacturer, can go into either form factor.

Putting a MicroSD card in an SD adapter doesn't change it's characteristics.

The adapter doesn't perform any signal processing, it is basically just a spacer with electrical contacts. 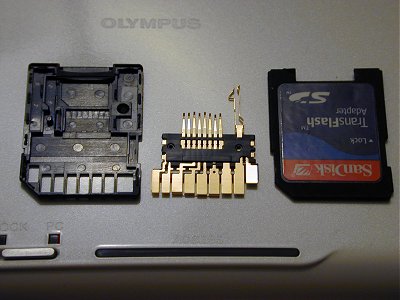 Thanks to Jason C for the picture from camerahacker.com

The MicroSD form factor has a lower maximum capacity and lacks a write-protect switch. The smaller format is generally more expensive at the current time. This Wikipedia link describes the technical differences in the specs for the two sizes (and many other memory card formats).

Even within the same manufacturer, the labeling doesn't necessarily tell you anything about the inherent differences between the form factors. For example, SanDisk could have developed a faster card in a MicroSD format than their last fastest card in the SD format, and labeled them both "Extreme". That doesn't mean the MicroSD format is inherently better. It just means that right now, you can buy a faster MicroSD card from SanDisk than their SD card with the same label.

Nature of the Cards and Manufacturing Process

Don't think of these cards as identical, precision parts. It is the opposite.

The only thing that has ANY meaning is the speed-class or UHS rating of the card.
Any other indication/name/label whatever is just marketing blurb and doesn't mean anything.

This is the small number with a capital C around it for older cards (speedclass) or the number with a capital U around it for newer cards (UHS).
Speedclass goes upto 10 and should be read as: ZZ Megabytes/second write speed.
UHS currently goes up to 3 (might go higher in the future) and should be read as: ZZ * 10 Megabytes/second.
E.g. UHS-3 is 30 MB/s and SC-4 is 4 MB/s.

The class indicates the MINIMUM write speed the card can handle. And nothing else.
The speed-rating is only valid for sustained write through-put with the FAT32 filesystem. Random-access behavior or performance when formatted using a different filesystem may vary wildly (and is usually worse).

Manufacturers usually source the components from various chip-makers and it is quite possible those chips don't perform the same. 2 identical cards can perform differently because there is no telling if they both use exactly the same innards.
But they should at least be able to do the minimum advertized speed as advertized by the class.
The form-factor (SD, Micro-SD, nano-SD, with or without adapter) doesn't say anything about the chip inside and has no bearing on the performance.

Typically: Cheap cards usually just make their speed-rating barely. It's a cut-throat market with low margins and every corner that can be cut will be cut.
There is a reason professional photographers/filmers tend to buy the expensive high-end cards. They usually perform better and are also less prone to bit-rot after prolonged use. And the more expensive stuff usually comes with a warranty that lasts longer than the time it takes the buyer to leave the shop with the card.

Not the answer you're looking for? Browse other questions tagged performance sd-card data-transfer benchmarking micro-sd-card or ask your own question.

0
Is a USB flash drive basically equivalent to a USB card reader plus an SD card?