I am using the Lync feature that saves conversations in the "Conversation History" folder in Outlook. During the time that a conversation is open, it gets saved several times, each saved conversation longer than the previous one.

I used the following program to help me do the cleanup. It sure would be nice if it was built into Outlook's Cleanup Folders logic.

This is by design.

In Outlook 2013, use the Quick Access Toolbar to add command called Clean Up Folders & Subfolders.

This will keep only the log you want and delete the partials.

To add the option to the Quick Access Toolbar, click on the arrow pointing down in the Title Bar. Then add the action to your toolbar. 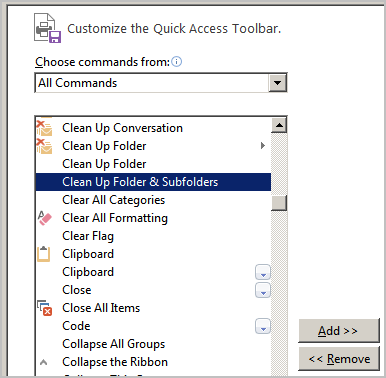 You should see it in the toolbar after you add it. Click on it any time you want to clean up your Lync conversations.

Not the answer you're looking for? Browse other questions tagged microsoft-outlook instant-messaging lync or ask your own question.