How do I install a Bluetooth headset on a Windows 7 PC to use with Skype?

I'm having trouble installing Nokia BH-100U on my Windows 7 PC (x64). I wanted to use it as a wireless headset for Skype. Currently I'm stuck at the step where the device should be automatically installed by Win7. It doesn't find the appropriate drivers and shows the following message: 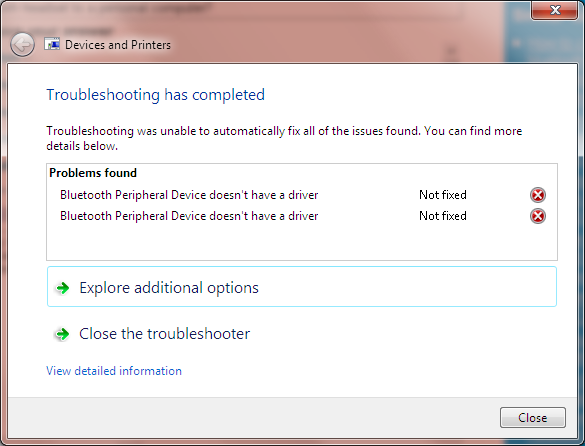 And this is what I get after selecting both Headset and Handsfree telephony services: 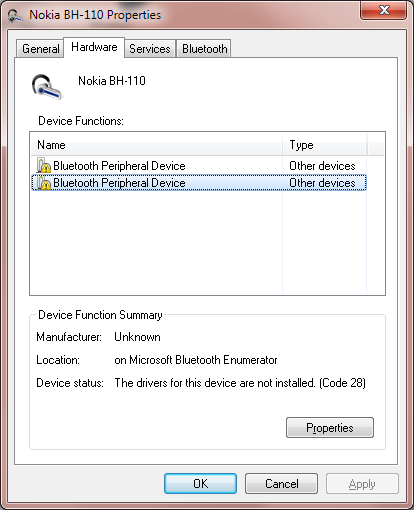 I tried deleting/removing it and reinstalling again, and the result is still the same as the first time. My usb-bluetooth dongle for PC can handle a PS4 controller, so it shouldn't be the cause. I also tried installing the headset on my netbook which has a built-in wireless module, but with the same result as on desktop PC. And I tried installing it on the WM6.1 smartphone, which worked just fine. Still, I'd like to find a way to use the bluetooth headset with a Win7 PC.

There doesn't seem to exist a separate installation of a "Bluetooth Peripheral Device" driver or anything. It's supposed to be found automatically, but it's not.

I also tried installing a Windows Mobile Device Center which didn't help. There was also a suggestion to get a similar thing intended for Vista x32 but it didn't even want to install on my Win7 x64.

The problem was fixed using the drivers from the article Nokia BH-105 Driver for Windows 7, which in this case worked also for the Nokia BH-100U.

had problems making the device talk to my Windows 7 (64 bit) because of driver issues, windows tries to install the drivers but they do not work. Download the driver for nokia bh-105 headset below , unzip it and browse to the folder when searching for driver on local drive. Worked like a charm without any issues. Now have bluetooth enabled headset that will work with Skype, Yahoo or Google voice/call etc..

Added 32 Bit drivers as well for Nokia BH-105 in case someone is using Windows 7 32 bit still.

Toshiba has built the generic drivers for almost any bluetooth devices. You can download it here- Toshiba Bluetooth Stack

I was having problems with my Bluetooth headset until I updated the drivers with SlimDrivers. It found new drivers that worked with my device.

Not the answer you're looking for? Browse other questions tagged windows-7 bluetooth or ask your own question.