How can a MBR formatted hard drive exceed 1.81 TiB capacity?

I recently purchased an external disk drive with 3 terabytes (2.72 TiB) of storage capacity.

Now according to Wikipedia's article on MBR, the maximum addressable storage space on a disk formatted using the MBR scheme is restricted to 2TB (1.81 TiB) so it stands to reason that high capacity hard disk drives (>2TB) must be formatted using GUID Partition Table (GPT) scheme to be able to use the entire capacity of the HDD.

Why is then the 3TB WD My Book external disk drive factory formatted with the MBR scheme and even more surprisingly, why does it show up on Windows as a 2.72 TiB drive when MBR can only address upto 1.81 TiB?

Has anyone else with a high-capacity Western Digital (or other brand) hard drive seen this before?

If it helps, the HDD is formatted using NTFS and the sector size is 4096 bytes. Also, here are a few screenshots: 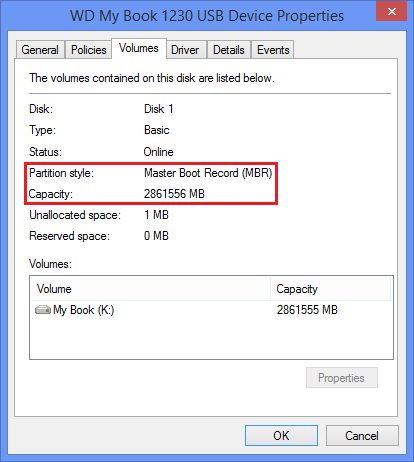 EDIT: After I posted my answer, I read this blog post from AnandTech which says:

But as you can see, the My Book I own has a single 3TB (2.72 TiB) partition and it's using MBR. The reason why this bothers me is because of this incident where a person claims to have encountered data integrity problems with the drive after transferring more than 2TB of data on the MBR formatted 3TB drive.

However, your drive is not 4k native. There are two layers of translation:

A SMART query passed though the USB bridge to the SATA drive inside reveals the truth (run here on my own Western Digital My Book 3 TB external USB drive in Windows XP):

However the drive as seen by the host computer connected by USB has a logical sector size of 4096 bytes:

and that's how Windows XP is able to use all 3 TB of the drive's space.

If you need more proof than that, you could remove the drive from its enclosure and connect it directly to a motherboard's SATA connector: you'd then find that the drive has a logical sector size of 512 bytes, and the drive's partitions would all appear as 1/8 their previous size and be unreadable due to incorrect partition table entries caused by the sector size mismatch. Plenty of people have done this and then had to fix the problem by rewriting the partition table.

Your drive came with an MBR partition table (or someone changed it to MBR at some point) to make it compatible with Windows XP. Newer drives come with GPT partition tables, which require Windows Vista or later.

Your drive uses Advanced Format 4Kn, where the drive exposes its native 4K sector size instead of emulating 512-byte sectors (512e). This ensures compatibility with devices that do not support GPT by extending the MBR limit to 17.6 TB (16 TiB), thereby avoiding the need to use GPT.

I got in touch with a WD support technician and he told me that it was an anomaly and that I should convert the disk to GPT instead to make sure I don't encounter any accidental data loss in the future.

However, he was unsure about whether or not it would actually cause any data loss but recommended I convert the disk to GPT and he also let me know that mine was the first case of a MBR formatted high-capacity drive (>2TB) that he's encountered.

If you have encountered a similar situation before and know why this is or isn't an issue, please add your answer.

Disregard everything I wrote below. It may or may not be correct.

I think I found the answer. @Hennes and AIDA64 helped. It seems like Western Digital has come up with a solution to prevent the slow demise of MBR and it's called Advanced Format.

With this technology, WD has increased the block size of the HDD from 512 bytes to 4 kilobytes so Advanced Format drives can grow to 16 TB without hitting the 32-bit LBA size limit.

Stephen Foskett has explained this very well in his blog post.

Current hard disk addressing scheme tops out around 2.1 TB. There are two simple factors in this equation:

The hard disk drive manufacturers have two roads forward, and they are not mutually-exclusive:

I'm inclined to go with the blog rather than the WD support technician's reply. I have a couple of Toshiba Stor.e Canvio 3TB drives. Both are factory formatted using 'advanced format' with cluster and sector sizes of 4k.

Drives are used on a Samsung smart TV which does not recognize GPT partition (most multi media devices will only recognize MBR).

4K Advance Format / 512e drives may be one answer, as noted by other answers. I won't duplicate their answers' contents by elaborating too much further. I write this immediately to demonstrate that I don't wish to try to compete with the idea of 4KAF/512e as I do agree with it. However, even using just 512 byte sectors, there is another possibility I see.

The other possibility* is that this could be done with 512 byte sectors on a disk. The actual limit is that the start of a partition needs to be within the first 2 TB**, and then there is another spot in the partition table that specifies how big the partition is. So, in theory, a partition could go from near the 2TB boundary to a location 2 TB later, so MBR could theoretically support partitions up to about the 4TB marker.

I don't ever recall seeing that advertised, and I can imagine why. As data storage devices (hard drives, SSDs) keep growing in size, trying such a method would only help for a single generation of size doubling (between 2TB and 4TB). It would require that people have multiple data partitions (one or more before the 2TB mark, and then only a single one that starts towards the end of the 2TB mark and can not be more than 2TB in length).

Trying to explain this to an average purchaser would likely be a nightmare for a technical support department. It would seem to be in the interest of many manufacturers to just embrace GPT (which sounds like a good solution anyway, in the slightly longer term as drive sizes increase) and not tell people that anything above 2 TB is a layout that they intend to try to commit to supporting.

While I can make no promises of how operating systems will support such a layout, particularly since a lot of people use Windows 10 which can update its behaviors without prior significant notice that most users see, the creators and maintainers of operating systems usually want to do what is simple and sensible. Which means, if a straightforward approach works well, there is no reason to go out of their way to break that. Most operating system development is involving areas of technology that most programmers find to be far more interesting than partition handling. So, I would strongly suspect that if you can somehow, anyhow, create a partition that extends past the 2TB mark, then that partition is likely to actually work just fine. (Especially, if it works in the beginning, it is likely to work after the operating system is installed.) Some partitioning tools might prevent the creation of such a valid layout as some limits may be imposed in an attempt to be user-friendly, but I can think of some partition manipulating software (generally text base) where sector numbers (or CHS values) can be typed in manually, and which are likely to work with that scheme.

[*] I'm writing this answer based on the studying I did on the meaning of the bytes in a Master Boot Record. The question has the "Windows 8.1" tag. I haven't determined if there are any specific behaviors that Windows 8.1 does to limit what a user can get away with during the operating system's installation, or by using "Disk Management" (diskmgmt.msc), or by using DiskPart. So this answer is intended to just address the concept of the 2TB boundary for disks that primarily use the MBR partitioning scheme. If you somehow manage to create such a configuration of partitions, I would imagine most computer firmware ((U)EFI/BIOS) and most operating systems will happily boot from, and effectively use, it. Also, I imagine that most operating system installation procedures will probably happily use such a partition if it pre-exists. Objecting would require specific checks that aren't likely to provide much benefit, so such checks probably aren't widely done.

34
Why is my USB drive showing corrupted data when plugged as an internal SATA drive?
16
How can I determine the sector size on an external hard drive?
9
Is it possible to set the logical sector size of a USB hard disk drive?
8
Making sense of the 2TB MBR partition limit
7
Advanced Format HDDs, USB enclosures and Windows / Linux compatibility
13
Do hard disk drives turn on 512e (512byte emulation of 4k sectors) as-needed depending on host controller?
4
Master Boot Record (Sector Size)
2
Can external HDD be larger than 2TB with MBR?
2
Multiple MBRs on a Single Hard Drive?
0
When I format a 4TB WD external drive, it holds ~1TB less amount of files. Why?
See more linked questions

22
Clone a Windows Installation to a 3TB Hard Drive; MBR to GPT
9
Is it possible to set the logical sector size of a USB hard disk drive?
1
Make 3TB hard drive appear as two (2TiB+750GiB) with MBR
0
Does the 2 terabyte limit for MBR apply to a partition or the entire disk?
8
Making sense of the 2TB MBR partition limit
5
What is the maximum size of hard-drive used MBR partitioning?