I have a bunch of media files which I want to record to DVD, but since each DVD only fits 4.5GB, I have to find the optimal way to organize the files to use the minimum number of DVDs (otherwise the empty space left in each DVD can easily add up). Are there any tools to help with this?

Many years ago there was a DOS utility to do this with floppy disks.

DVD Span is a backup tool for writing the contents of large folders to multiple DVDs. DVD Span can automatically determine the best organization of each disk in order to fit the maximum amount of data on the minimum number of disks. DVDSpan is a great tool for backing up your music collection, photos, or even your entire hard disk to DVDs. And because it produces regular DVDs (or CDs), no special software is required to read or restore your backups.

Ah, the Knapsack problem. I could only find one online solver for this, here. Your knapsack size would be 4.5GB, and each packet would be your file sizes. You'll need to massage its output a little bit to fit your particular application, but it should be workable. This wont run very fast though, because this problem is hard.

Jeff Shattock's answer is correct that this is equivalent (or isomorphic, as mathematicians write) to a combinatorial optimization problem, but it's equivalent to the 1-dimensional bin packing problem, not the knapsack problem.

Lucky for you, I have some code to share that will solve this problem for you, or anyone else, with access to a Windows computer with at least version 3.5 of the .NET Framework installed.

The query code will enumerate all of the files in the rootFileFolderPath folder, recursively, meaning it will include files in all of the subfolders too.

Then it will create 'bins' for the files such that the total size of all the files in each bin is less than or equal to the bin size specified.

The first list is of all the files it found, listed in decreasing order by size.

The second list is the bins created by 'packing the files', with a list of the files and their sizes, as well as the remaining size of the bin.

Here's a screenshot showing the second list and the first two bins created: 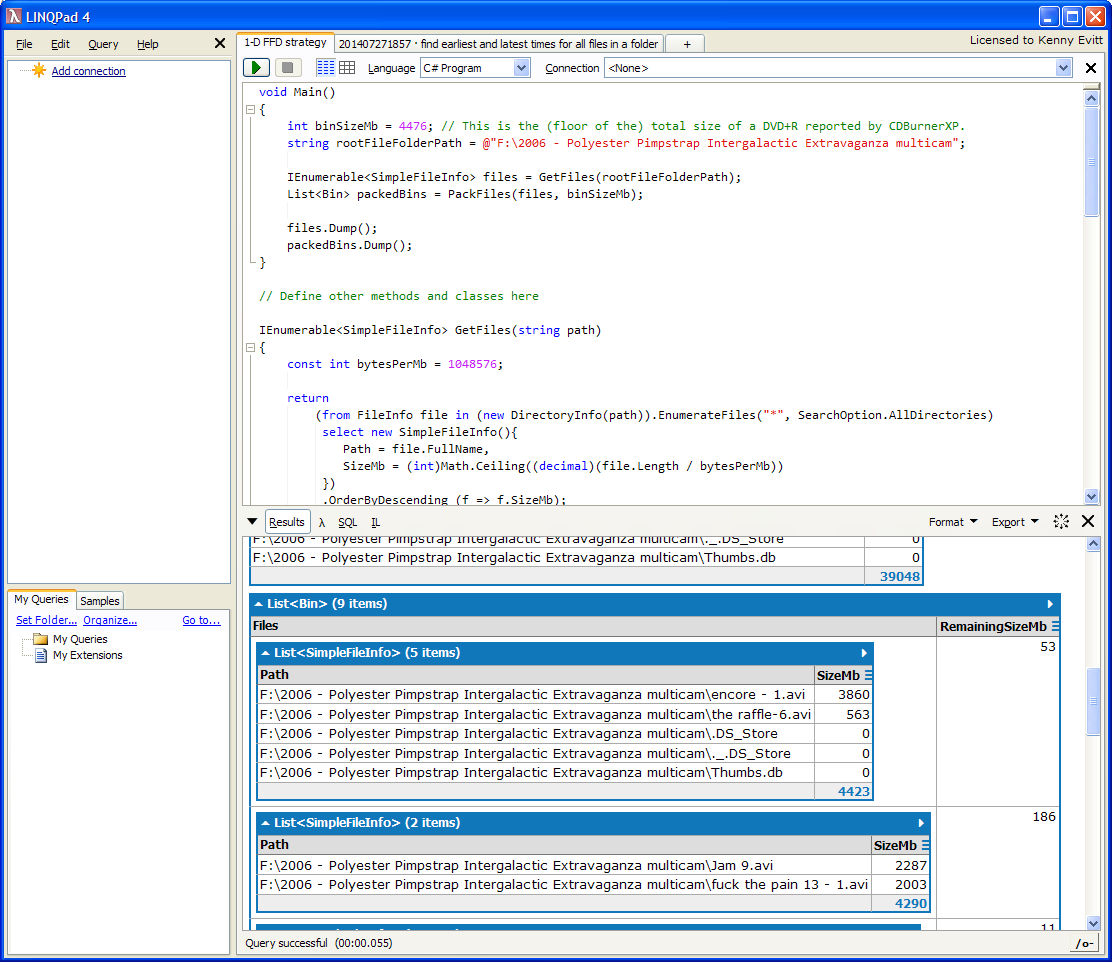 According to Wikipedia, the algorithm I used – the First Fit Decreasing (FFD) strategy – shouldn't be too bad; Wikipedia states:

'OPT' refers to the optimal strategy (as something potentially unreachable, not any particular actual strategy).

Based on my somewhat fuzzy memories of the mathematical terms involved, this should mean that the FFD strategy should, at worst, pack items into ~1.22 times the number of bins that an optimal strategy would. So, this strategy might pack items into 5 bins instead of 4. I suspect that it's performance is likely to be very close to optimal except for specific 'pathological' item sizes.

The same Wikipedia article also states that there is an "exact algorithm". I may decide to implement that too. I'll have to read the paper that describes the algorithm first.

You can take one of the variants of the program in Hitchhiker's guide to Haskell, perhaps after working through some part of that tutorial; the tutorial is written around solving exactly yours problem of distributing things onto several disks whereby the solution is incrementally refined, as exemplified by the following passage from Chapter 3 of the tutorial:

As you might already have recognized, our problem is a classical one. It is called a "knapsack problem" (google it up, if you don't know already what it is. There are more than 100000 links).

let's start from the greedy solution...

Here is a similar question (although not the same: it's not being asked for optimization there), where you may find more useful solutions/programs for your task (if they will be posted):

Some hints for understanding the programming in the suggested tutorial

In general, the Haskell code is quite expressive (since Haskell is a language for programming on a high level of abstraction), and hence can be easily grasped.

When looking at the code of one of the solutions, remember that the top-level structure of the program we want to write is quite simple, as put in Chapter 1 of the tutorial:

Now let's think for a moment about how our program will operate and express it in pseudocode:

Sounds reasonable? I thought so.

Let's simplify our life a little and assume for now that we will compute directory sizes somewhere outside our program (for example, with "du -sb *") and read this information from stdin.

and look further more closely at the parts of the solution.

Ages ago I wrote PHP script to do such task: https://bitbucket.org/borszczuk/php-backup-maker/

Also, try Discfit, which selects files and directories to copy across various disks:

Not the answer you're looking for? Browse other questions tagged dvd media burning performance algorithm or ask your own question.

7
Ripping DVDs to 700 MB video files
1
“Simple” cross-platform way to distribute a collection of MP3 files
24
RamMap “Empty standby list” drastically speeds up PC. Is there a better way to do this?
1
How can I see the hidden data of a bootable CD/DVD media?
0
How can I determine which track is played when I select an entry in a DVD menu?