I'm having an issue getting a gamepad to work properly. Windows' input-devices system has always confused me, but after some research I've gathered the following:

My issue involves getting a Bluetooth gamepad (Amazon Fire TV Game Controller) to work in games on Windows. Obviously since it isn't an Xbox 360 controller, getting it to work on an XInput-only game is going to require a work-around. This project seems to do the trick almost perfectly, as it enables all input devices to emulate Xbox360 input and therefore make them compatible with XInput.

However, I've run into a few snags and I can't really tell whose fault they are, or how to fix them. One issue is that the L/R triggers are not detected at all. Going into the "Devices and Printers" menu and clicking on the "Game controller settings" for my controller allows me to test the inputs via this familiar screen: 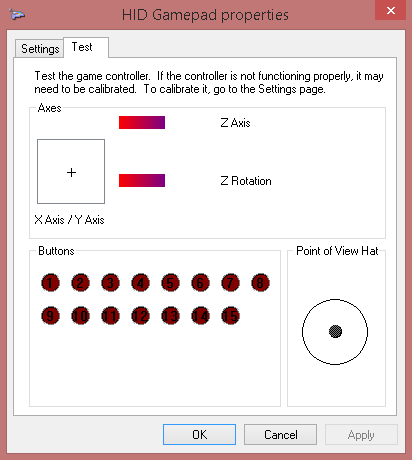 Pressing the triggers does not do anything at all. Furthermore, if you notice, there are 15 input buttons. This is correct, as the controller I'm testing does have 15 buttons, however 4 of those buttons are media buttons that control the OS on their own. For example, pressing the home button on the controller will open my internet browser and take me to my homepage. Pressing the other media buttons seemingly does nothing.

You are correct about what directInput is vs Xinput, though one could argue that the directInput api allows for more diverse controls. If you have a controller that registers as a directInput device and you have a game that only accepts Xinput, I suggest x360ce (@ http://www.x360ce.com/ ). This converts directInput into Xinput for the game while masking the controllers actual input. Simply run x360ce.exe inside the game directory and follow the x360ce website's instructions. Unfortunately it is not compatible with all games, and also may not be compatible with your controller. It's worth a shot though, just be sure to leave feedback for the developers of x360ce afterward. I hope this helps!

Not the answer you're looking for? Browse other questions tagged windows drivers bluetooth input-device game-controller or ask your own question.