Optimal location of pagefile on a system with two SSDs, with system drive faster than secondary drive 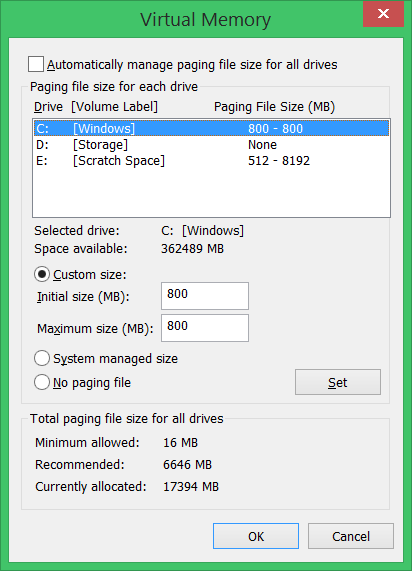 IWhileO: Use both storage items at the same time as best as possible, one for the paging (not exclusivly) and the other for "the data that will be paged" If your paging programs, then the paging would be best set on the disk that the programs are not on. (with 24g ram you not likely paging programs).

If your paging huge file data, databases, massive photos too big to fit in real memory, then the paging should go to the disk that is Not holding that data that is going to be paged. (or saved back to)

Use 2 , Both, let windows decide:
Windows given more than one paging location is supposed to use the better location, so you could also set a paging on both disk items. It does not use both simeltaniously, but chooses the best one. (actually I have never seen it do this, but it is said that it will) I prefer to have the paging on the disk that is NOT where the program or data is comming from to BE paged, so data comes from one, and is paged to the other

Generally windows system you have 2 "different" types of paging occurances.
1) After bootup some low use system items will be paged out , as they will not be needed while the computer/os is runnning, it is a small ammount. Having this system paging go to a different item other than the one the OS is on, will make booting and re-booting a tiny bit faster. (plus some other similar things from a few programs)
This type could be concidered paging of programs.

2) Paging because the data for the program uses tons of memory. If the data heading to ram is what will be paged out, having the paging occuring on the other disk the data is not comming from will be faster.
This type is the larger ammount of paging, the terribly slow times, I concider this data paging, and the paging should be occuring on the other disk that the "data" is not on.

If you have sufficient real ram, for the programs your using, and you have an ample quantity for most uses, you only (or still) have 1 occuring, and 2 is not a big concideration if it does not happen :-).

Contention is avoided when placing the pagefile on another disk, but performance may still be lower depending on the workload because of the slower disk. However, if pagefiles are placed on both disks, the system will try to use both concurrently, producing a RAID 0-like effect which can increase performance.

1
Is it a bad idea to make a swap partition on a SSD?

37
Any reason not to disable the Windows pagefile given enough physical RAM?
7
Do higher-capacity SSDs last longer?
25
Should the pagefile be placed on the SSD or the HDD?
0
Putting the pagefile on an an alternative drive from system files on Windows 7
0
Can I do without minimum 400Mb pagefile on C:.... 2 pagefiles?
5
Using a portable SSD to divert or reduce writes to system storage on a low-memory Windows 10 laptop
4
Windows 10 is ignoring my pagefile settings and is unwilling to create or use a pagefile on a different drive