iWork '09 Keynote: is there is straightforward way to 'dim' and 'highlight' each item in a bullet list?

What I want to do is show those three bulleted items in a sequence like this:

In other words, only one bullet is shown at a time (the one i am current discussing) to reduce audience distraction by what comes next or what i just finished discussing (the prior bullet).

This is such a common thing to do, there's got to be a simple, reliable way to do it. The only way I know of is to configure the items individually (using "Build In" and "Action" on each bullet item, which is not only slow but doesn't work well). Another way i've found--which, again is very slow--is to create my bullet list not by selecting a bullet list, but to build the list manually with text boxes (one bullet item per text box) then line them up as a list. This way it's easier to manipulate them independently--again though, takes way too long to do one slide this way.

I'm using Keynote '08 but you should be able to find something similar on Keynote '09. It's easiest to describe this with a picture. 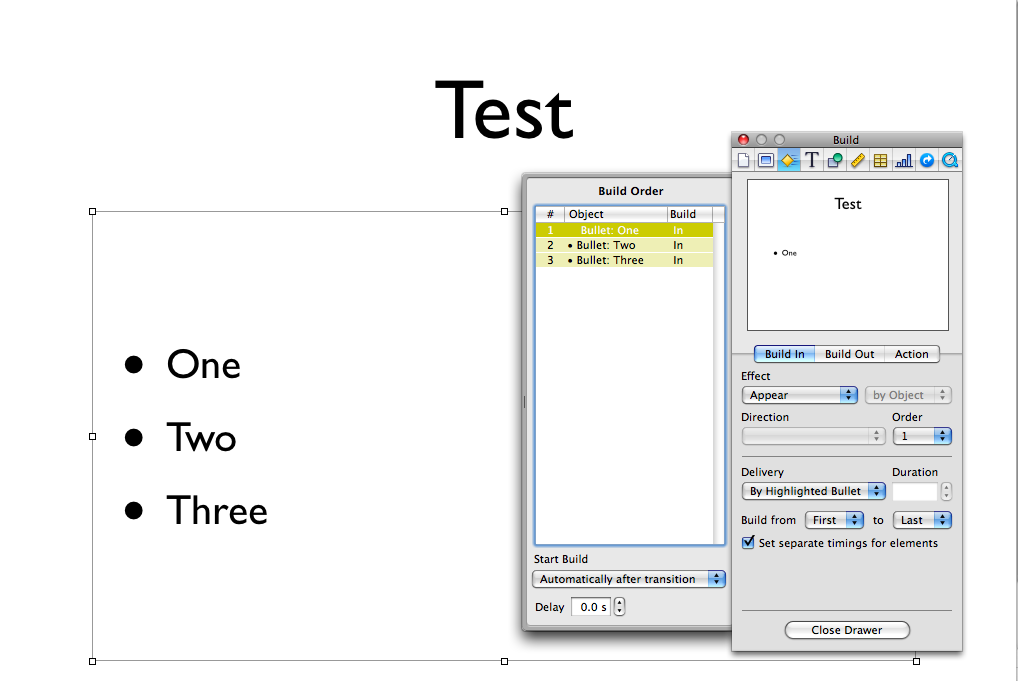 In case this picture ever disappears I'll describe this using words. Create a bulleted list. Select this list, then select the Inspector. Under the Inspector select the Build menu (looks like a diamond with lines coming out of it). Under the Build In tab select the effect you want. Then (here's the part you want) under Delivery select 'By Highlighted Bullet'. You want to 'Build from First to Last'. Then select 'Set separate timings for elements'. This will make a drawer pop out. Select 'Bullet One'. At the bottom select 'Start Build: Automatically after transition'. It should do exactly what you described.

Not the answer you're looking for? Browse other questions tagged macos mac iwork-keynote iwork or ask your own question.

5
Weird symbols on Mac
1
Program to Copy File Path with Mac OS X (that works with Open With)?
4
“Console log” options doesn't appear in system log queries for Mac 10.7 console.app
1
Understanding the scope and lifetime of environment variables in shell scripting
0
Is there any way to save a search in Xcode or OS X?
2
PowerPoint file --> 'missing font' error when opened in Keynote
2
multiple ssh keys created, then deleted. now ssh-agent not working. (osx terminal)
0
Which XFINITY WiFi hotspot service - Use 'xfinitywifi' or 'CafeExpress' or 'XFINITY' network to use?
0
Difficulty with selecting certificate in google chrome