Where does Cygwin set the locale ($LANG env var)?

I know that I can use the locale tool and the export LANG=... to set my locale on Cygwin.

However, even I don't have %LANG% defined on Windows, when I run bash --login, I notice $LANG is already affected to fr_CH.UTF-8 where I want it to be en_US.UTF-8.

Where is it defined? How can I properly change it?

Where does Cygwin set the locale ($LANG env var)?

How to set the locale

Assume that you've set one of the aforementioned environment variables to some valid POSIX locale value, other than "C" and "POSIX". Assume further that you're living in Japan. You might want to use the language code "ja" and the territory "JP", thus setting, say, LANG to "ja_JP".

What you can do, for instance, is to set the LANG variable in the mintty Cygwin Terminal in the "Text" section of its "Options" dialog. 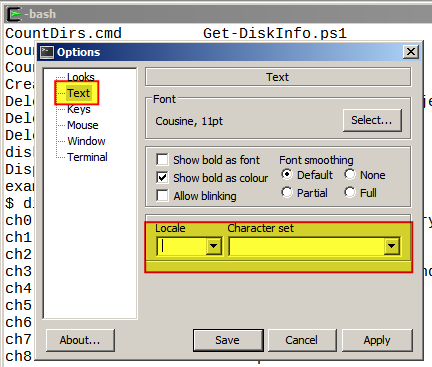 If you're starting your Cygwin session via a batch file or a shortcut to a batch file, you can also just set LANG there:

Not the answer you're looking for? Browse other questions tagged cygwin or ask your own question.

0
Cygwin: xterm not starting in user $HOME…?
1
Getting GNU Emacs Windows to run my ~/.bash_profile when creating a Cygwin M-x shell subprocess
2
Cygwin (bash, g++…) is in Japanese mode - how to set everything to English?
5
Starting Cygwin in arbitrary directory?
4
Cygwin - Cannot or does not create user profile files - /home/User/
3
Cygwin: Does it peacefully coexist with normal Windows operation?
0
ssh closing connection during login for just one particular user
0
How can I set a modified PATH for a non-interactive non-login POSIX shell invoked by Scons on Cygwin?
0
Where can I get a Cygwin /etc/skel directory
0
Set .bashrc location in cygwin + conemu without changing $HOME