Connecting a 2Wire modem/router to another router

I want to hook a Linksys router to my 2wire modem/router (2701HG-b) to share my Internet connection. I ran from an open port from the 2wire to the WAN port of the Linksys but it will not work.

I did this before with my cable modem to a router to my Linksys router. It worked then but not now. I read I can turn the 2 wire into a modem only but I need the 2wire wireless access also. IPCONFIG /ALL sees the 2wire with IP info as well as DHCP server/gateway.

If you want to replace the 2wire with the linksys, using the 2wire as a passthrough-only DSL modem, you'll need to look up instructions on bridging it and have only the Linksys plugged into it. The 2wire will not be providing wireless, etc., it'll just be acting to translate from DSL to Ethernet (Bridging)

If you're happy with the 2wire as your firewall/router but want to use the Linksys as an additional access point (providing wireless signal in another area, perhaps), the setup is actually much simpler.

If you're looking to use a different, replacement router for fancier WiFi (a/b/g) and fancier ethernet (gigabit) than what the 2wire box provides, then you need to enable bridging as discussed in other answers.

Behind the scenes, what it is doing is setting up a DMZ connection from the public IP directly to your new-fancy router, and disabling any internal firewalling for that route.

You can view this final configuration it set up for you on the Settings | Lan | IP Address Allocation page. 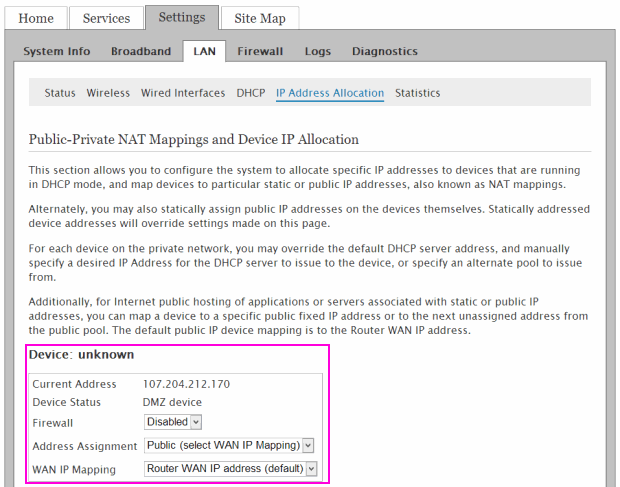 Note that you can continue to connect devices to the 2wire box LAN ports as well, such as AT&Ts video on demand box. In fact you'll have if you want to get to the 192.168.1.254 admin panel for the 2wire box.

Try resetting your Linksys router, you may have configured it for the cable specifically (with a fixed IP address).

Unplug any computers or other devices from the 2wire (except the router) and power cycle the 2wire. Make sure you have the 2wire ethernet going to the linksys WAN port (or just one of the ethernet ports if you want the 2wire to do all of the routing, in which case you'll need to turn dhcp and routing off in the linksys). Connect to the linsys router and configure it if necessary.

The 2wire modem could also be setup to only give out one IP, or only to a specific MAC address. Which is where the disconnecting comes in, in my statement above.

It also appears that the 2wire router you have, has a USB port, some routers do not work well (or at all) with both the USB port and ethernet ports in use.

I don't specifically have that model 2Wire model, but I have the 3700HG-V (used in AT&T U-Verse setups). The 2wire Homeportal units seem to detect and know when you're double-NATing (as the Homeportal has a router and Wi-FI AP built-in and your Linksys is one as well) and either warn you about the setup or flat out refuse to work.

I'm not sure if your unit has this, but setup your Linksys as Tyler instructed -- and head to the router's admin page (http://192.168.1.254 for me) and look for an option called DMZplus. This option passes your 2wire's external IP address to a MAC address of your choice (your Linksys router's WAN-side MAC address in this ase) -- so your Linksys router behaves as if it's attached directly without a router in between like your previous cable modem setup. (Technically, it's a layer 3 bridge that passes all incoming traffic to the assigned DMZplus host -- so it's not exactly like a direct modem connection, but pretty close)

This page will also let you control which of the attached devices get which IP (in your case, just the router's WAN-side should be attached to a LAN-side port on the Homeportal).

See if that helps!

1.Make sure the main(2wire router) router is working

7.Connect the 2 routers via ethernet to internet.****

1
new PC not work with existing router, but works fine when directly connecting to cable modem
2
Do I need a Gigabit router with a 24Mbps down and 7Mbps upload speed cable modem?
1
Can I relay my USB modem connection to my wireless router?
2
Configure DD-WRT router behind a Cisco cable modem
2
MAC filtering not working on 2wire 2701HG-T modem
0
What is the right way to connect to a modem to a router, connected to another router?
6
Accessing router from another router/modem
0
Can I use the ISP modem/router as only a modem? and LAN-to-WAN to another modem/router?