This is what I did, I ran these commands:

Then I configured the ICS on the interface connected to internet and linked it up with the new virtual WiFi access point interface.

Then I connected my Android phone to the WiFi access point and tried to access the internet.

An error occurred on the browser, telling me that the DNS did not resolve.

So I modified (static config) the WiFi configuration on my Android phone to use Google DNS 8.8.8.8 and 8.8.4.4 and everything worked.

The WiFi interface is on 192.168.137.1, so my Android phone connected in that particular range, and set the gateway & DNS to the same IP.

In all the guides I've read on the internet, no site mentioned this problem. I don't understand why the DNS information is not propagating from the USB modem -> WiFi Access Point -> Android phone WiFi?

Even if I set the DNS servers on the WiFi access point interface statically to Google DNS, it still doesn't work.

The internet connection only works properly if I set the DNS servers on my Android phone's WiFi configuration. If I don't, I can only use direct IPs.

I had the same issue, frustrating to get no connection when connecting to the windows hostednetwork because of no DNS being sent to the connected devices.

I found the solution here: https://4sysops.com/archives/how-to-share-wi-fi-in-windows-8-with-internet-connection-sharing-ics/ I read it before but didn't get it until the second time around, the steps that go like this are important:

Now in summary, when you connect to the hotspot after sharing the source connection with your hostednetwork connection, the DNS will start being sent to the devices that are connected via DHCP automatically.

Addendum A: Make sure that there is no DNS setting manually set on the "Local Area Connection*3" for example, it should just be empty: 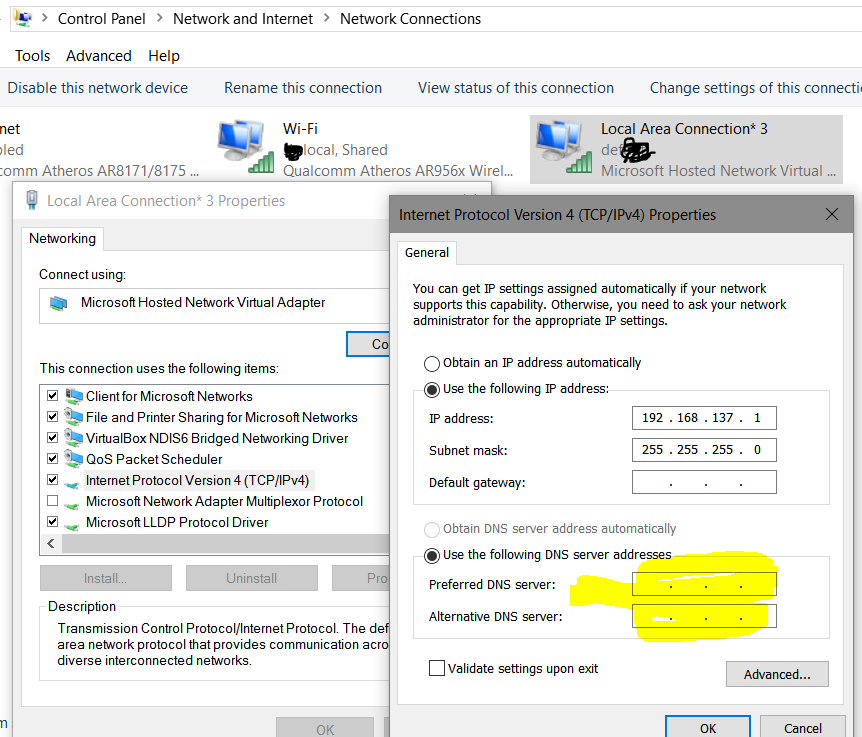 Not the answer you're looking for? Browse other questions tagged networking windows-8 wireless-networking dns netsh or ask your own question.

0
wireless network with cable modem and access point
0
how to share 3g internet via wifi?
0
wireless internet connection does not work, wired connection has internet
0
Windws - DNS for two NICs - one with hosted network
2
Microsoft Virtual Wi-Fi Hosted Network
1
Sharing Mobile Internet to a WiFi network
0
Windows 10 Hosted Network and Ad Hoc connection with two wireless interfaces
2
Windows 10 hosted network - Phone connects, but has no internet
2
How can I add DNS to all my interfaces without naming them?