What is the 6-pin power connector on an HP ProDesk?

I have an HP ProDesk 600 G1 desktop PC, and I'm upgrading it with a new graphics card and a new power supply.

Now, the problem I'm having is that the motherboard in the PC doesn't have a standard 24-pin ATX power connector. Instead it has a 6-pin power connector and a 4-pin next to the CPU.

The 4-pin isn't a problem, my new PSU has that, but the 6-pin has me worried... Can I just connect the PCI-e 6-pin power cable to the motherboard, or do i need a custom PSU? 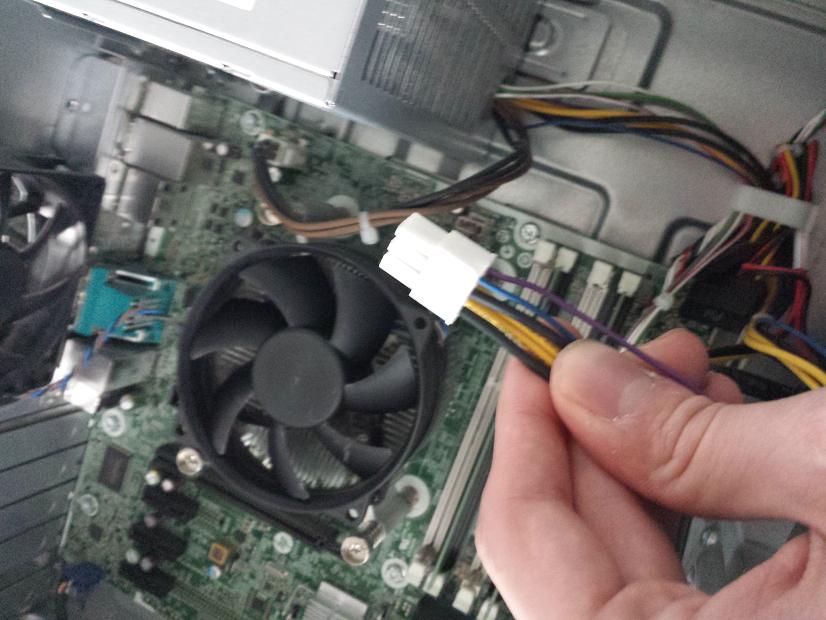 I happened to have a HP G600 standing right next to me from a customer, so I took some pictures: 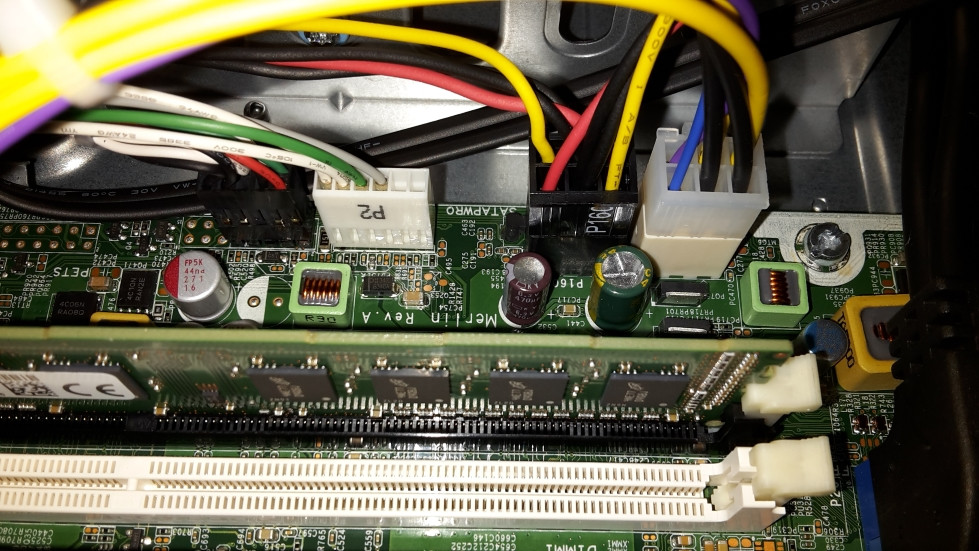 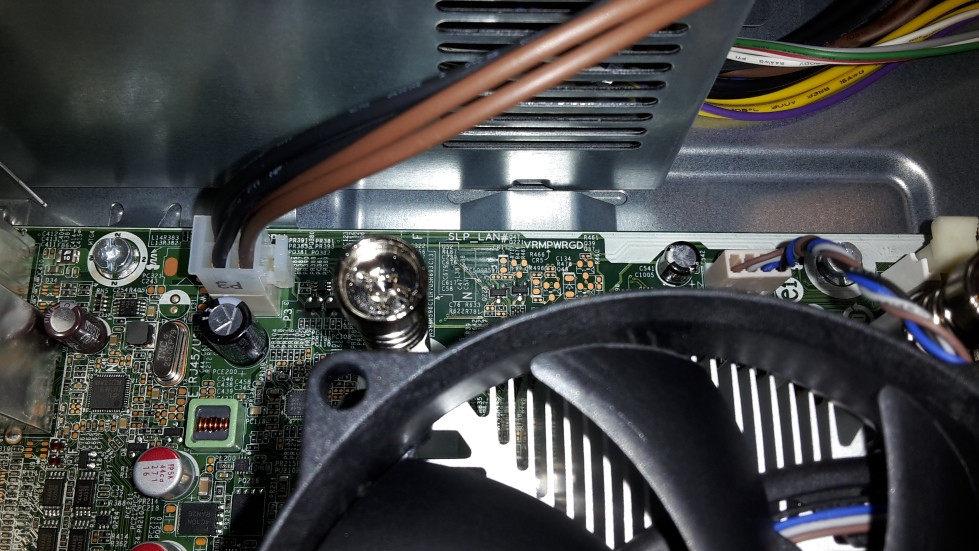 As visible in the top picture, the blue and purple cables going into the 6 pin plug are not as thick as the other 4, so those would be the ones carrying the power on signal, with the 4 black and yellow ones carrying power. This is clearly not compatible with a standard PCIe 6 pin GPU connector.

I would advise you to check the HP support site for the HP ProDesk 600 G1 for a list of compatible graphics cards, that will work with your current PSU.

For example, I found this AMD Radeon HD 8490 DP (1GB) PCIe x16 Graphics Card on the list, which is a somewhat decent card, which is guaranteed to work with your system.

As mentioned in the other answers, trying to get a standard PSU to fit the case/motherboard would be a major hassle. I would definitely not recommend this.

The lesson here is: don't use a Professional Desktop PC for Home/Entertainment/Gaming purposes, if you can avoid it, as they are typically hard to upgrade.

EDIT: After reading @Jasons comment below, I did some further research. The Q85 Chipset features one PCIe x16 expansion slot.

From the HP support web site:

And from the Intel Q85 Chipset specifications:

This is obviously different from what I wrote in my hasty comment below.

Those HP monstrosities are not compatible with anything else.

You need a custom PSU. This is not going to work with a normal PSU. It's not just a matter of wiring up a conversion plug. POWER_ON line handling is different too.

Don't use the PCIe power-plug unless you like smoke to come out of the motherboard.

I would not even think about this without a ton of due diligence.

Firstly if the full sized version of the system uses the same oddball PSU as the slim versions, an ATX psu wouldn't even fit.

I'd consider a few other things - Assuming its a 12V only power input for the motherboard, a motherboard powersupply would at least have a green power on cable. Assuming one yellow 12V and one black ground cable, the other 3 cables could be power good, or sense cables or any combination. It might even be a 5V cable.

That is even assuming a PCIe cable fits (they have different 'keying' for different 6 pin molex cables), and you'd not get power anyway without the green power on cable being connected to (IIRC) ground.

In short, I suspect attempting to upgrade the PSU on anything that's not standard ATX is going to involve a ton of work with a multimeter, lots of testing and cable splicing. Even that is probably something I wouldn't particularly recommend, it could be dangerous to either you, the system or both if you get it wrong.

It's not a standard power supply. The organization involved in the 80 PLUS program tested this power supply. Where you would normally see something like "ATX12V", it says "CUSTOM".

We are working on the same issue here with what looks like an 8100 Elite with a PS-4321-9HA and seeing if we can't get it hooked up to an ATX PSU.

Now that little white header there that is called "P2":

Now PowerON handling, as mentioned above - could be different.

The chip is a Silicon touch PS25A - datasheet

Now how is that different and how do we spoof a standard ATX power supply into thinking that it's connected to a standard motherboard and the other way round?

Make step-up converter from +5VSTBY to +12VSTBY
Make PCB with ATX 24 pin header that goes into motherboard and translates powerON and powerGood back and forth between the devices. ->EDIT: Just bought an ATX extension cable and soldered and shrinkhosed them together.

Meanwhile, on the PSU board, other chips used are: CM6802AHG, TL5940N, TNY279PN - I thought TNY might be an ATTiny or something like that but whew no microcontroller. We are in analogland all the way.

So far, good news. Reading up on this controller chip here - PS25A - looks like it's just the standard +5V and 0V with a 1.5V threshhold for high and low and all that might be an issue is current sinking, I saw the standard ATX PSU deliver more current through Power_On than this one here. Perhaps that is where the difference is.

Nothing special. Datasheet shows basic PSU design, the chip is a very classic circuit. Apart from fan control and stuff (can be omitted) there is nothing different re standard ATX which means I got myself an ATX header cable and soldered this to that and that to that and Bob's your uncle. More elaborate stuff later but for the moment, that's a wrap.

If you do this yourself - cut the original HP plug off the original PSU so that your colors are on the right pins and then from the ATX PSU get an ATX header and wire grey to grey, black to black, blue to blue, green to green, just fine, but USE THE HP little plug you cut off the original HP PSU because indeed the pins are different from anything standard ATX. Colors are identical except for

which is 12VSTBY. If you don't have 12VStby use a DC DC stepup converter or a wall wart PSU to get you started, wire + to purple, -/GND to black/PSU Ground and in you go. Plug it in, small green LED on motherboard should light, then you can turn on the main switch and board should fire up and give you a

Apart from that, looking good here.

Gonna install chipset drivers next but that's not my job anymore. :)

Have fun, Lukas out.

It’s extremely unlikely this would work, because the connector is sure to at least have the PWR_ON pin. Otherwise, you wouldn’t be able to power up the PC. Of course, the PCIe connector doesn’t have that because the graphics card doesn’t turn on your PC.

If the current PSU’s cable isn’t sleeved, could you provide a photo of it? We’ll be able to provide some more reliable answers with that.

From looking at the picture, it’s indeed a custom connector. With the non-standard-colored signal wires, it’s too much of a risk to modify a standard PSU. To properly power the PC, you’ll have to get a similar custom PSU.

I know this is an old thread but I followed Lukas information above and built an adapter using a 5v to 12v stepup converter inline on the purple cable as he described and it works perfectly.

To overcome the Fan error at startup I linked the white cable from the P2 plug to the grey cable of the CHFAN2 plug on the mobo and it doesn't show any errors at all on boot now. I just taped off and left the red/white cable as it is the PWM control cable for the fan in the stock PSU and therefore isn't required as far as I can tell

Starts up and shuts down fine. Hopefully this will help others out in the future

If you are going to stick with the old computer, you can purchase adapter cables such as this one from ebay: ATX PSU to 6pin power adapter.

Be careful with the older and newer versions of HP. They are not compatible. The wire connections of the P2 connectors are different. Those 4 wires are connected in different side of the connector!

1
Is GTX 960 supported by Intel Chipset Q75?
0
How turn on the HP power supply
0
What is the the best way to add a second power supply on an HP ProDesk?