Intent: To be able to deploy to lan-example.com from any dev environment; whether it be directly from the virtual OS, or any single-OS system, or even over the internet using ONE SSH key stored in Keepass. I'm currently unable to do so from within Vagrant's OS unless I explicitly generate its own key and authorize it in each of my deployment servers. I believe the way to do what I want is through User Agent Forwarding, yes?

What works (using Host OS): Putty, connecting to lan-example.com without the need to explicitly reference the SSH key.

What doesn't work (using Guest OS): ssh -v web-server@lan-example.com as it shows that there aren't any keys to use.

I've noticed something about the beta version of Keeagent that allows me to set the SSH_AUTH_SOCK. I've done so, and set up an NFS share that allows the guest OS to read the file; however this doesn't change anything. How does agent forwarding even work in this type of environment? What's different about Windows that causes this to fail?

You need to ssh from the host OS (using PuTTY on Windows) with agent forwarding enabled. Then from that session, ssh from the guest OS to the server. 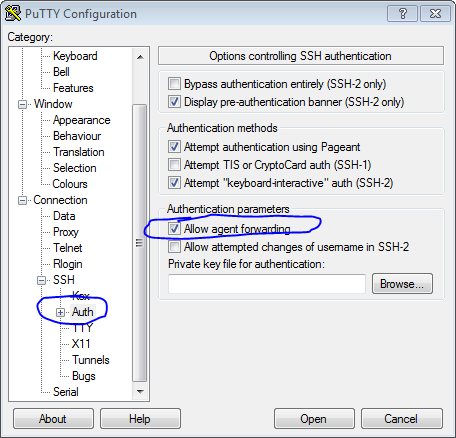 Not the answer you're looking for? Browse other questions tagged networking ssh virtualbox vagrant or ask your own question.