How do I get VLC to play on the second monitor on windows?

How do I get VLC to play on the second monitor on Windows? On Mac OS, there is an option in the video menu "fullscreen video device". Windows doesn't seem to have that option.

There are various options in the DirectX settings that let you select a monitor, but they don't seem to work simply.

It has the option, it's just kind of tucked away a bit. Under Tools -> Preferences go to the Video section and choose your display device in the DirectX settings: 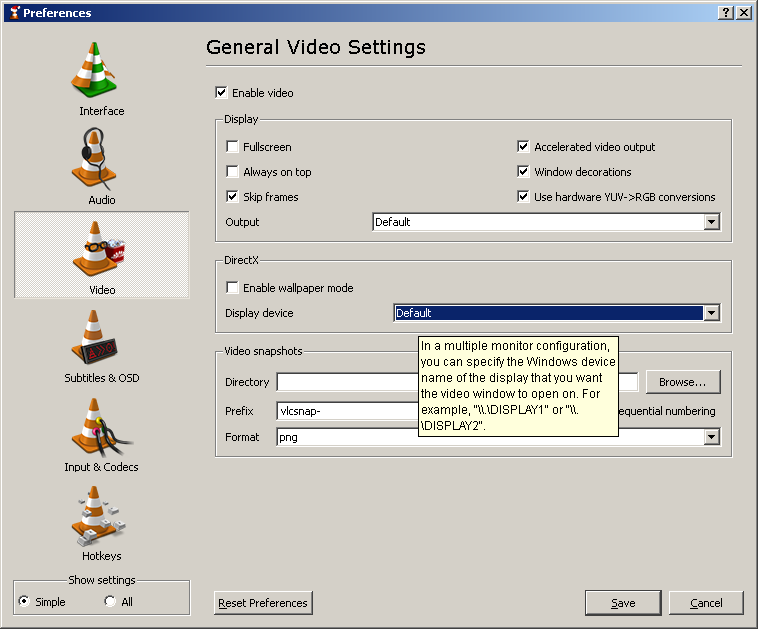 You can use \\DISPLAY2 in a multi-monitor configuration. Ensure you are using DirectX instead of Default as the output (in the Display section above).

At our church, we sometimes need to display video content on the second monitor which is our projector screen. We also chose VLC to display the content, and for similar reasons as stated we found it rather distracting on having to drag the 'player' window of VLC on to the second monitor. We also wanted to come up with a really simple solution so that our less computer-savvy operators could find it really easy to show video content.

Using VLC 1.1.4 under Windows Vista, we came up with the following batch script, which we've put into a file (Vlc_Starter.bat) which can be placed anywhere (for example on the Windows desktop):

This enables us to simply drag-and-drop media files onto the Vlc_Starter.bat file icon, which automatically loads and starts the video on the second monitor. We can then control and stop the video playing from the VLC 'controller' window as normal.

If you wanted to use this, you would have to adapt the Vlc_Starter.bat to match the setup of your second monitor - this is the video-x=... and video-y=... option in the script. You might also need to change the vlcPath=... setting for your install location of VLC. You can also adapt the script to display DVD content (replace the %1 to something like dvdsimple://g:\@2 where 'g' is the drive and '2' is the DVD title number), or make the script into a Windows shortcut instead (I won't give details as my posting is already pretty long...!)

I've found a semi-satisfactory way to do it. Make sure you set up the second monitor on the right hand side, then:

Now, when you start a video, it will run full screen on the second monitor. The disadvantages of the above compared to the Mac OS "Fullscreen Video device" menu are:

Drag the VLC window to your second screen.

Then go to Tools > Preferences > Video > Display and check Fullscreen.

VLC will now remember its position and always start videos in fullscreen mode on the second monitor (until you change the position to the primary display or the secondary display becomes unavailable, that is.)

After engaging in battle with VLC (again, for I think, the third time) on behalf of my client I discovered that the commands will work if you restore the window. I always have my windows maximized 99.9% of the time. For those who do not know what restoring a window is, it's the reverse option of maximizing (it makes it smaller but does not minimize the window to the taskbar). I believe simply closing VLC while it's restored on the desired screen will work and for my client it still loads as fullscreen. It is a little annoying to not have it go fullscreen immediately but they never use it for anything except to loop a video for their store front. I don't like this VLC bug because I prefer VLC maximized.

Is this doesn't work you can always try downloading an older/newer version to see if the issue has been fixed. This is the problem with software, too many not-so-well implemented options versus fewer though better supported options. I hope this saves someone's sanity and time.

Screen select doesn't work as it should on Windows VLC. As a workaround I'd suggest using it normally and download Dual Monitor tool. Set hotkeys for moving window to other screen (will work with full screen as well. I can rotate windows with fx. ctrl+shift numpad +/- (You can set up most key combos here). Started with ctrl +/- but gave some trouble enlarging text in firefox was bound to same key and needed that on my small screen on laptop. I bound rotate screen (same program) to alt+ctrl numpad +/- which is rarely needed, but nice when it is. I seen other players that handle it correctly. I like VLC because it is multi-platform and open source as well as ad free, but these issues seem to plaguing it in even recent versions on Windows.

Not the answer you're looking for? Browse other questions tagged multiple-monitors vlc-media-player or ask your own question.

43
How to trim/cut clips with VLC
5
How to resize VLC window?
8
Possible to black out/dim second screen while using multiple displays in VLC 2.1.3 fullscreen mode?
1
How to get the streaming wizard option in VLC - Windows?
14
VLC 2.2.4 - how to turn on the option "pause on left mouse click"?
1
How to make Mac VLC play videos in filename order?
1
Virtualbox second monitor only in scale mode (VM: Kali)