How to reset a Windows application's "Shortcut key"?

In Windows, it's possible to assign a keyboard shortcut to an application via the "Properties" dialog's "Shortcut" tab. 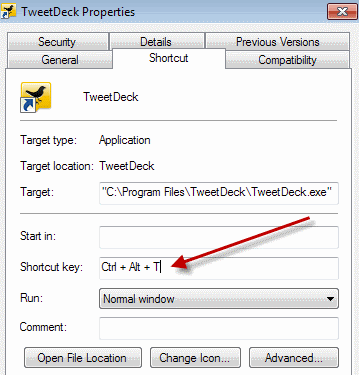 I had a "Shortcut key" set for an application. But ever since the company's IT replaced my work computer, that application isn't installed anymore.

I'd like to assign the previously used shortcut key to a new application. But it's not accepting the shortcut key, probably because it is, or rather was, already assigned to a application. Even though I have a new computer, I'm using the same Windows profile.

Usually, I'd just delete the shortcut key from the first application to be able to assign it to a new application. I've done that before and it works that way.

How can I reset one or perhaps all shortcut keys, so I can reuse them for new applications?

Are they stored in some configuration file? Could I tweak such a settings file? Windows registry keys perhaps?

You could try to find out which shortcut has reserved the shortcut key. You can list all the details of a shortcut file with this script:

To list all shortcuts to a shortcut_info.txt -file, open command prompt (WindowsButton+R, cmd, Enter) and use these commands:

This example has been tested with windows 7.

I had a very similar problem that I've just resolved. Use the script posted in Ciove's answer, with one small change in how it's run:

The only change I made is that instead of looking in specific folders, I let the script scan my entire drive. This does give you a much larger file to dig through, but a regex search with "Hotkey : .+" can make quick work of that. My phantom shortcut was in [user folder]\AppData\Roaming\Microsoft\Internet Explorer\Quick Launch\User Pinned\StartMenu\ which isn't a location I've seen mentioned in any other article about hotkeys. (Maybe you could just look there first?)

I used this to remove a shortcut given to a program that Windows transitioned to an App in Windows 10.

I used RJL Shortcut Key Explorer SW when I had the same issues. I am not endorsed by them, I simply like quick GUI solutions sometimes. I think I uploaded mine to virustotal.com beforehand too & it came out okay

Not the answer you're looking for? Browse other questions tagged windows-7 keyboard-shortcuts shortcuts or ask your own question.

2
An application hijacked a keyboard shortcut, how can I get it back?
0
Shortcut Keys Issue
0
Switching to App in Dock
54
How do you open the command prompt in Windows 7 with a shortcut key?
1
How to focus WEB-browser with a hotkey in Windows?
2
Change in Windows 10 Shortcut key behavior
1
Opening Windows console application in new window using shortcut key
0
How do I show all custom shortcut keys in Windows 10?