What's the difference between them?

KeePass was started about 2003, originally for Windows only, but now uses Mono to run on anything that Mono supports, like Mac OS X, Linux, FreeBSD...

KeePassX is an "Contributed/Unofficial KeePass Port" of KeePass that was started in 2005 (if the copyright notice on the bottom of their webpages is accurate) to run KeePass on Linux. It is now available as a native program for Linux, Windows, OS X, and others.

As the KeePassX homepage says:

Originally KeePassX was called KeePass/L for Linux since it was a port of Windows password manager Keepass Password Safe. After KeePass/L became a cross platform application the name was not appropriate anymore and therefore, on 22 March 2006 it has been changed [to KeePassX].

Currently, the biggest difference between KeePass & KeePassX seems to be the appearance and "feel" of each program, especially on Linux or Mac OS X where KeePassX doesn't rely on Mono, so matches the look of other native programs closer. And, KeePassX's version 0.4.x & 2.x display issues.

Also, KeePassX/XC doesn't support plugins (there are several plugins for KeePass), as the user Grief points out in their answer so do upvote it too.

These are on a Linux Mint 17 XFCE (Ubuntu 14.04 based) system. See this Ubuntu package search for keepass for what version's currently in what release:

This version's in Ubuntu "Trusty Tahr" 14.04 LTS, and uses the KeePass v1.x database - AES/Rijndael or Twofish

This is basically the same font & sizes as other windows, looks great & fits in. You can customize the columns & see the preview panel. Opening an entry to view/edit opens a new window: 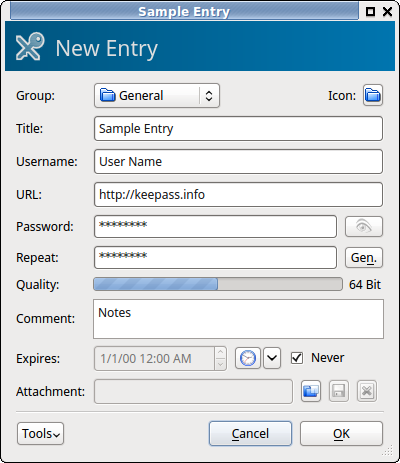 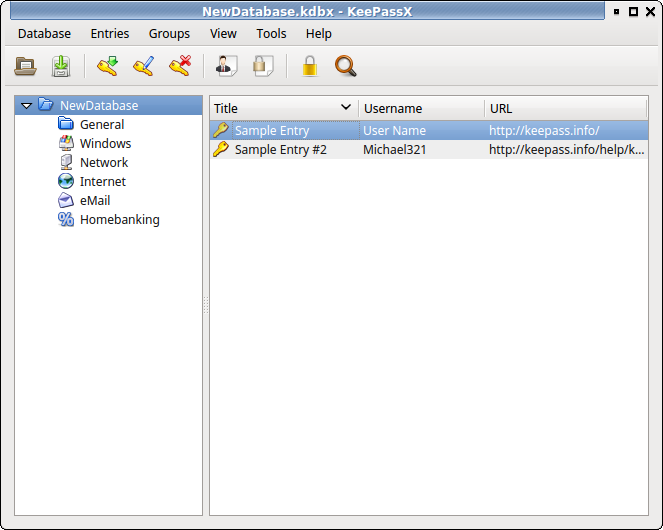 It uses the new database version 2.x, but you can't use TwoFish encryption, and it removes some display features like the preview panel (the bottom/right panel with details on the selected entry) and customizing columns. Viewing/editing an entry does not open a new window, it changes the whole KeePassX window into the view/edit window.

For some reason, it wouldn't let me resize the window to any smaller than this screenshot. Hopefully they'll add back the missing display features soon, but until then I'll stick with KeePassX 0.4.x.

A "new contender" has emerged, KeePassXC, that describes itself as "a community fork of KeePassX, a native cross-platform port of KeePass Password Safe, with the goal to extend and improve it with new features and bugfixes to provide a feature-rich, fully cross-platform and modern open-source password manager."

It's FAQs answer some basic questions:

KeePassXC and KeePassX appear to be visually nearly identical (so no screenshot, only adds a Password Generator toolbar button), but some differences are KeePassXC has:

Visually very similar to KeePassX 0.4.3 but the font's different & smaller, just looks out of place. The preview panel's much more compact (like reading a .CSV file) and viewing/editing an entry opens a new window. It's got a side-by-side view too:

Also can NOT do somethings that the Windows version can like Export to KeePass version 1 formats:

And has some display issues for me, like in this next image the key transformation rounds is actually 6003, but only the 6 is visible: 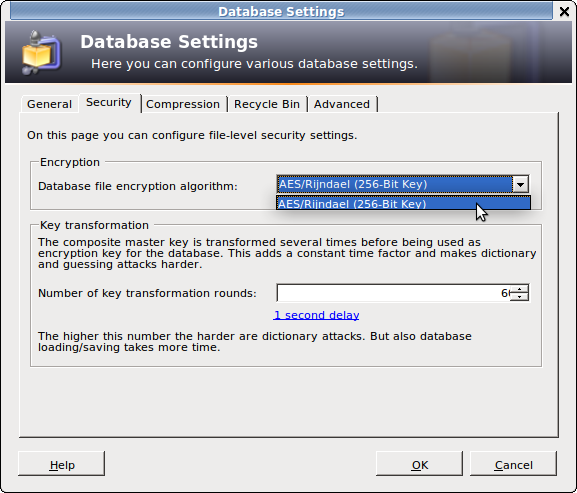 Formerly, the current "main" KeePassX (0.4.3) only supported "the KeePass 1.x (Classic) password database format" But as of December 7, 2015, KeePassX version 2 has finally reached a stable release:

We’re proud to announce the first stable release of the KeePassX 2 series after several years of development.

KeePassX 2.0 is using the new .kdbx (same as KeePass 2) database format.
You can import your .kdb database from 0.4 from the Database > Import KeePass 1 database.
This is a one-way process though. You can’t migrate back to the .kdb format.

And the page "KeePass Edition Comparison" is probably helpful to differentiate versions 1 and 2.

It compares around 50 different aspects, copying them all here would be unnecessary, so I'll just paste a few of the differences, features that KeePass 1.x do NOT have, compared to KeePass 2.x. Many of these look very Windows-centered:

See the linked Comparison page above for more info, & some description.

Currently, one of the most significant differences between KeePass and KeePassX is lack of plugins or even API for them in KeePassX:

Are there any plugins for KeePassX?

There is no interface built in to support plugins. Therefore, no plugins available.

I'd strongly recommend to give KeePassXC a try. For me at appears to be much better than both KeePass and KeePassX. It has browser integration out of the box.

KeePassX is an open-source clone of KeePass for Linux and OS X. As KeePassX uses QT, they don't have the same user interface.

However, they can be used interchangeably as their .kdb or .kdbx databases are binary-compatible.

So, until they develop such features in KeepassX 2.x I suggest you to use Keepass2.

Please note even if the 'keepass2' package is in official Ubuntu repository, you can't just install it from Ubuntu Software Store but need to open a terminal and type

4
KeePass lost password and/or corruption due to Dropbox/KeePassX
3
What is the easiest way to copy Chrome's login/passses into KeePass without creating duplicates?
2
How to use passifox with keepassX ?
0
Does changing the name of a KeePass key file corrupt it?
2
Make KeePass recognize login field in Desktop application
0
KeepassXC Autotype: Differ between "Return" and "Enter" key