What makes Word 2013 new documents file name have such a high number?

When you open a new document, Word automatically names it "Document1", increasing the number every time you open another new one.

I had just opened 3 or 4 docs at most. Autosave is set to 10 min. And disabling an add-in I had didn't change the behavior. What is causing this?

This doesn't interrupt my workflow but I'll save you time reading the long explaination of why I want to know this. The short one is to understand how Word works and finding out if it is related with other problems. Thanks in advance...

I think what you're seeing is most likely another application on the system that's using Word for some sort of functionality and keeping winword.exe running. A common use for this is to use Word for spell checking. I've put an example at the bottom of the answer that anyone can try, but Microsoft has their own example in C# on MSDN (search "How to: Use COM Interop to Check Spelling Using Word (C# Programming Guide)", as I've run out of links at my reputation level).

To verify this is actually what's causing the problem, the next time you see this happening, close all visible Word windows, pop open the Windows Task Manager, choose the Details tab, and see if WINWORD.EXE is running.

As this type of access to Word is via a COM control and therefore the parent process for this WINWORD.EXE will just be svchost.exe. As far as I know, there's no way to see what called the control after the fact.

To start to figure this out, assuming WINWORD.EXE is running, select it and choose End Task in Task Manager. If WINWORD.EXE restarts and starts running again in a few seconds, see option two below for how to log and hopefully figure out the application at fault quickly.

Assuming WINWORD.EXE is no longer running, the first option to figuring this out would be to just leave Task Manager running, choose Options, Always on top, then leave the Details tab enabled, resized or on another screen, with the W-named processes visible. You can then proceed with your normal workflow and as you start new applications or do tasks, watch to see if Word starts up.

The second option would be to use the Windows Sysinternals Process Monitor from Microsoft's TechNet site. You will need to search if you don't have the tool already, as I don't have any links left in the answer. Using this tool you can capture when and by what the Word COM control is started from. After you have downloaded, launched the tool, and accepted the EULA, choose Filter, Filter (or just press Ctrl-L), switch the first field to Path, then the second to Contains, paste in: {000209FF-0000-0000-C000-000000000046} to the text field and verify it says to make an Include filter. Note the GUID we're searching for is known one for Word, but you could easily look it up yourself by searching for Word.Application in the registry. Screenshot: Process Monitor making filter to search for Word COM control: 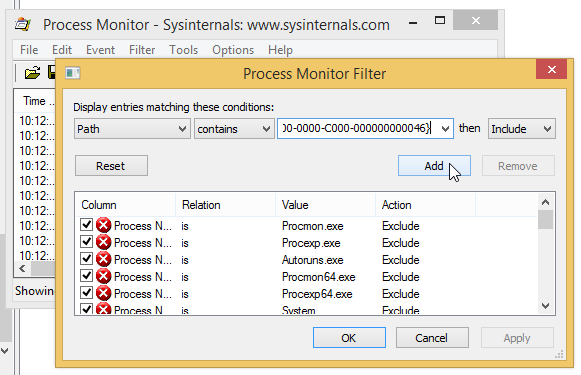 Choose Add and then OK.
Process Monitor will now be blank. If events aren't counting up in the bottom status bar (The current filter excludes...), make sure File, Capture Events is checked.

If you were able to trigger WINWORD.EXE restarting when you ended its process in Task Manager, do so again to get WINWORD.EXE to restart and hopefully reveal the process at fault. If that wasn't the case, you may want to restart Windows and restart Process Monitor for a better chance of capturing it. Then, go about your normal tasks, periodically checking to see if Process Monitor has captured anything. When it finally does, the Process name field should reveal the culprit. If it's not obvious, double-click one of the entries and choose the Process tab to see all the details.

Additionally, if you end up needing to run Process Monitor for a long period of time, you may want to check it periodically and Clear the capture (Ctrl-X) to prevent running out of pagefile memory (or you could use another backing file, but that's another topic).

To demonstrate both the issue and how Process Monitor functions, you can simulate the behaviour by using some simple VBScript. To do so, open up Notepad and paste the following:

Then save it to your Desktop as test.vbs. Switch to the Desktop and double-click test.vbs to execute the VBScript. Back in Process Monitor, you'll be able to see that the process name is WScript.exe (the default VBScript engine) and that is what is responsible for starting Word. Screenshot: Process Monitor showing WScript.exe starting Word control:

You can also start up Word from the Start Menu and you should be at Document2. You'll need to manually kill the WINWORD.EXE process in Task Manager or it will keep running.

9
Is there a way to manually open the Recovered Documents Pane in Word 2013
0
Disappearing documents in Word 2013
2
Word 2013: Get the page number for the previous page
1
Can I stop Word 2013 marking a name as a grammar error?
0
Use 2 different page number formats in same document - MS Word 2013
5
How to Modify the Start Number for Caption Numbering Word 2013?
0
ms word 2013 massively increases file size of images inserted into new word document
0
MS Word 2013 - What style is applied to pasted images?
1
Is there a logic to the file name Word 2013 suggests on first save from the documents text?