GPG public key created with GnuPG is rejected by MS Outlook 2010, why?

I created a GPG keypair with GnuPG on the CentOS 7 command line and I have exported the public key into a .asc file and successfully used that public key to encrypt emails sent from another email address which have been successfully decrypted using the private key that was created along with that public key.

So how can I generate a public key file that MS Outlook 2010 will accept and be able to successfully use to encrypt emails sent to be encrypted by the same private key?

Here is what I have done so far: 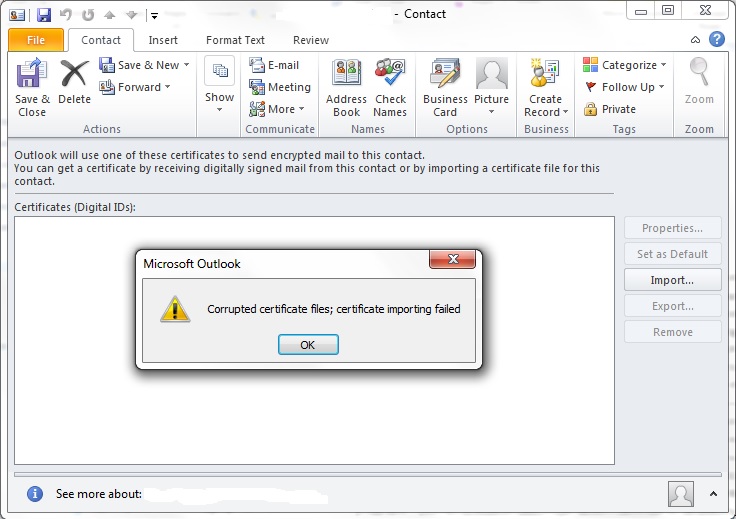 How can I generate a keyfile that Outlook can import and then successfully use to send encypted emails that can be decrypted on the other end?

Note that Thunderbird is able to do this with a keyfile from this same key. Also note that I want to manually import the key first this way, and wait until later to develop the tools to send the key by email. The private key is on a server that hosts an app, and I would have to write my own code to send out public keys by email. I want to wait to write that code until after getting this approach to work first.

How can I resolve this?

You're confusing two different digital certificate systems. Certificates are not interchangeable between the two systems.

OpenPGP provides a non-hierarchical trust system, which does not require central certificate authorities. It is the more powerful, but also more complex system. Most mail clients do not support it out of the box, and require add-ons for using it.

Everybody can create his own key, and get it signed by others.

The other option for digital certificates is X.509, used in S/MIME for e-mail, but also SSL/TLS for transport encryption of HTTP and other protocols. Here you have a bunch of certificate authorities (actually usually multiple hundred) that you trust in (by default settings of your computer/mail client), and that can vouch for others (issue certifications) which you automatically trust.

This is a good fit for (hierarchically organized) companies, which probably is the reason that it has much more wide-spread implementation. Outlook, Thunderbird and most other (reasonable) mail clients support it by default.

There are lots of certificate authorities where you could buy such a certificate (valid for a given timespan). I'm only listing two especially interesting ones:

Outlook does NOT use normal (pgp) private keys for signing emails. It uses SSL style certificates and their associated private keys (signed by a trusted third party) to do the work. Outlook needs this certificate to be in pkcs12 format. (the Linux "file" command can confirm this)

The big disadvantage is that you'll have to pay for the Outlook certificate.

I would recommend installing the unix2dos utility on CentOS like this:

And then from the command line in CentOS running this unix2dos command with the -n flag:

Then try importing the username_pubkey_dos.cer into Outlook 2010.

Outlook 2010 can only handle S/MIME out of the box. If you want to use OpenPGP, you need a plugin. For GnuPG there are three options

The first one is free and open source but is only for the brave. The same applies to the plugin that is part of the gpg4win project. If need a good working one you should try gpg4o, which is not free, but runs hazzle free. All of them should be able to import the key that you have created under your CentOS.

0
How can I force Thunderbird to encrypt an email and its attachments?

6
Convert ssh public key to gpg
8
Is it possible to associate a secondary email address with an existing *public* key?
0
Use PGP key with MS Outlook 2010
1
PGP Public Key expiration GPG
0
How can I send an email using a GPG public key?
2
Using OpenSSL to generate encryption key for Outlook users
2
Why must I enter a passphrase to encrypt a file with my own key?
2
Sending email using my GPG public key: Trying understand how to encrypt a PDF I will email
0
How do I get the "user name" field from a public key block with GPG?