I have a file server running (SMB) that I connected to in Explorer (Windows 7 Professional) by visiting \\1.2.3.4 directly. I logged in as one user, without saving credentials, and now wish to log out (actually I want to change to a different user, but being able to log out in general would be useful).

I have searched around for ways to do this and found a bunch of info that suggests using some form of net use \\1.2.3.4 /del:

However, none of these actually seemed to work for me. I run net use * /del, then use net use to verify that the list is empty, and yet the share mysteriously remains in explorer, unaffected, accessible, and still using the previous login.

Another thing I tried, which also failed, was doing e.g. net use \\1.2.3.4 /user:newusername to switch the credentials. However, even when net use showed an empty connection list, this still produced an error stating that multiple connections to the same resource with different users were not allowed - why there were connections that didn't show up in net use's list is a mystery to me.

I then found this article How to logout from shared folder (microsoft.com), which recommends:

This procedure worked for me. There was nothing of interest in the Credential Manager, as I did not save credentials, however restarting the Workstation service after clearing the connections with net was the key (I did have to close all explorer windows to get the service to restart).

My question is: This is not very convenient at all, especially when I have to explain it to less tech-savvy users. While I could certainly create e.g. a batch script to automate the whole thing, is there an actual, proper, consistent way to do this that doesn't involve restarting services (and possibly doesn't involve the command line, although personally I don't mind)?

Also, a sub-question: It is weird to me that the vast majority of resources I found on this matter didn't suggest restarting Workstation, and the suggested process of using net use alone seemed to work at least for the other people who posted comments on those posts. Is the Workstation restart unique to me and indicative of some other issue on my machine, or was it just left out of all the instructions for some reason? Only the microsoft.com support post had instructions that recommended this step, which is what finally got it working for me.

Logging out of a share seems like it would be a common enough use case to justify some simple way to do it, so I am baffled by how difficult it was for me to figure this out.

Other things I've tried with no effect:

I got it working by doing the following:

2) You are not alone in this issue. Most people probably never experience it because they only have one user and/or multiple users but all with the same password. I seem to experience it all the time. I'm assuming it is because I have the same user name on multiple computers but with different passwords.. (I am not in a domain; laptop is Windows 8.1 with Windows and Linux-based servers..)

(from memory) If I open the root share of a computer, such as \raspi, before accessing a locked down share such as \raspi\private I will have that issue. It seems that a connection is made using the public/open share first and then it gets stored.

As for 1), I only need to close the Explorer windows and (sometimes command prompts) that have accessed that share. I have never had to restart the workstation service.

But it may work for me because I always tell Windows to "launch folder windows in a separate process"..

This might be a long shot, but did you wait long enough after using net use * /d? As far as I know, even after deleting the share, Windows keeps the session open if there are open handles (Explorer window, etc.). And even after closing those handles, there is a time-out period during which it will reconnect the share. The default seems to be 10-15 minutes. You can shorten this in the registry.

However, it seems that "KeepConn" is no longer used in newer versions of Windows. See "Idle Connection Timer" on this page: http://blogs.msdn.com/b/openspecification/archive/2013/03/19/cifs-and-smb-timeouts-in-windows.aspx

Expand one of your "Windows Credentials", and then click on "Remove from vault". 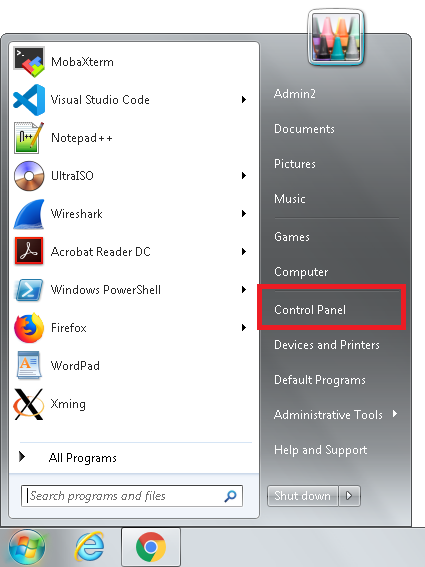 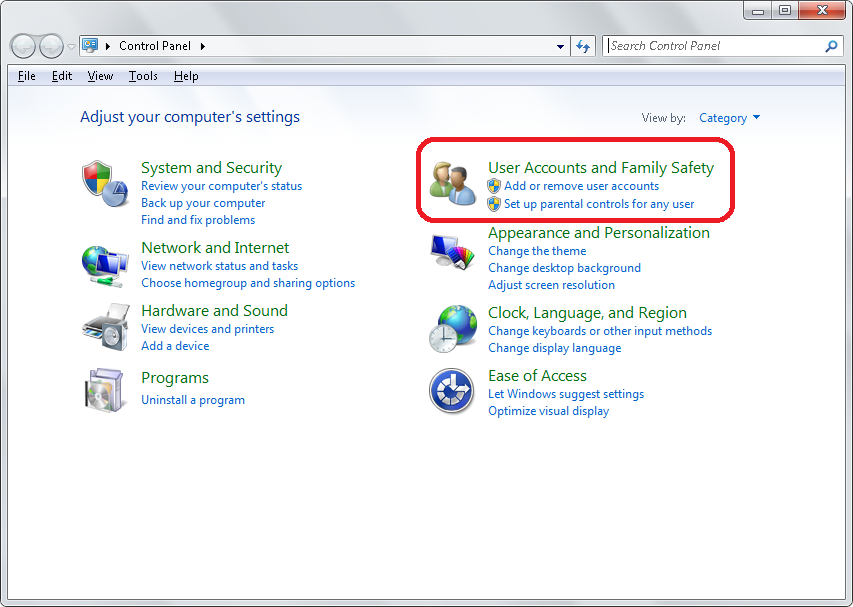 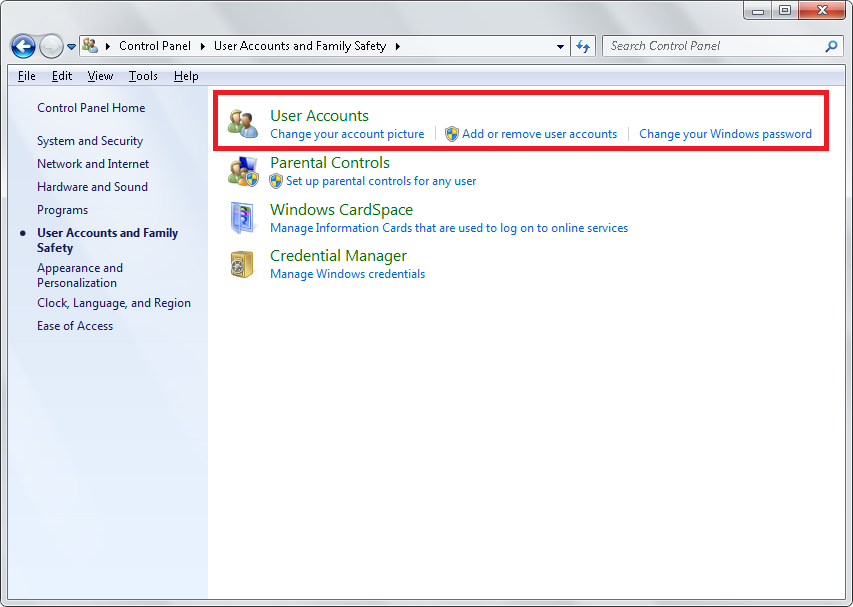 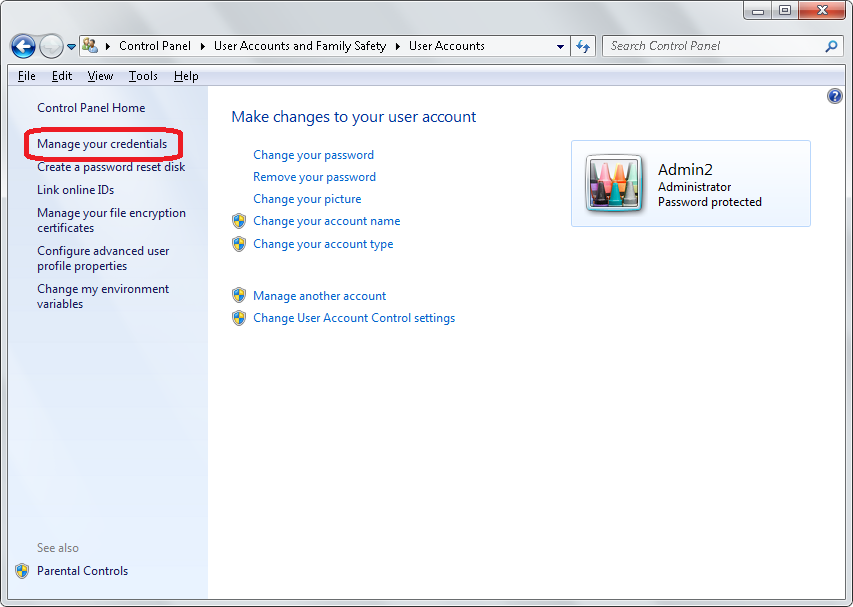 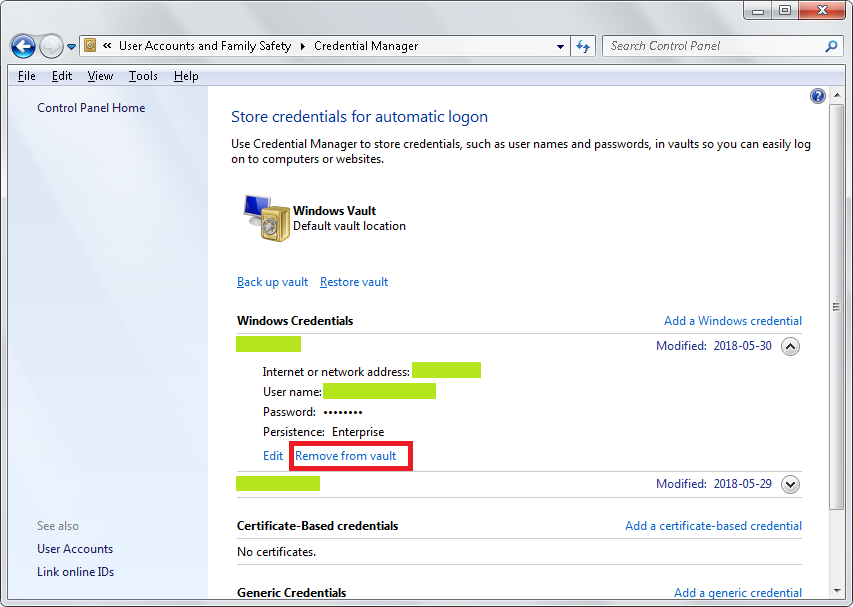 Way 2: use Multiple NetBIOS names for one computer:

Then you can connect the resources of different users using different NetBIOS names.

in all network workstation

All users will connect to its resources.

Not the answer you're looking for? Browse other questions tagged windows-7 windows network-shares or ask your own question.

67
How do I change the user I am logged in with on a Network Share?
3
How to logout from a Windows shared folder?
6
Logging out of a network share drive without reboot?
2
Force Windows Explorer to forget network drive credentials

6
Logging out of a network share drive without reboot?
3
How to logout from a Windows shared folder?
0
Windows credential for LAN network access overwritten by HomeGroupUser$
1
Windows Service accessing UNC share
1
How to stop windows explorer from trying to log in to a network share so many times after a password change
1
Windows Networking: Prompt For Unique Credentials, On Multiple Network Shares, Without Mapping
2
Force Windows Explorer to forget network drive credentials