Have Firefox prompt whether to open PDF in browser, or in external application, or for saving?

How can I get Firefox to give me a prompt, -- either natively, or through a plug-in, -- which will ask me:

This is my current behavior, Firefox 36, Ubuntu 11.04, running in --safe-mode, and with the default profile; first I look up a PDF to open 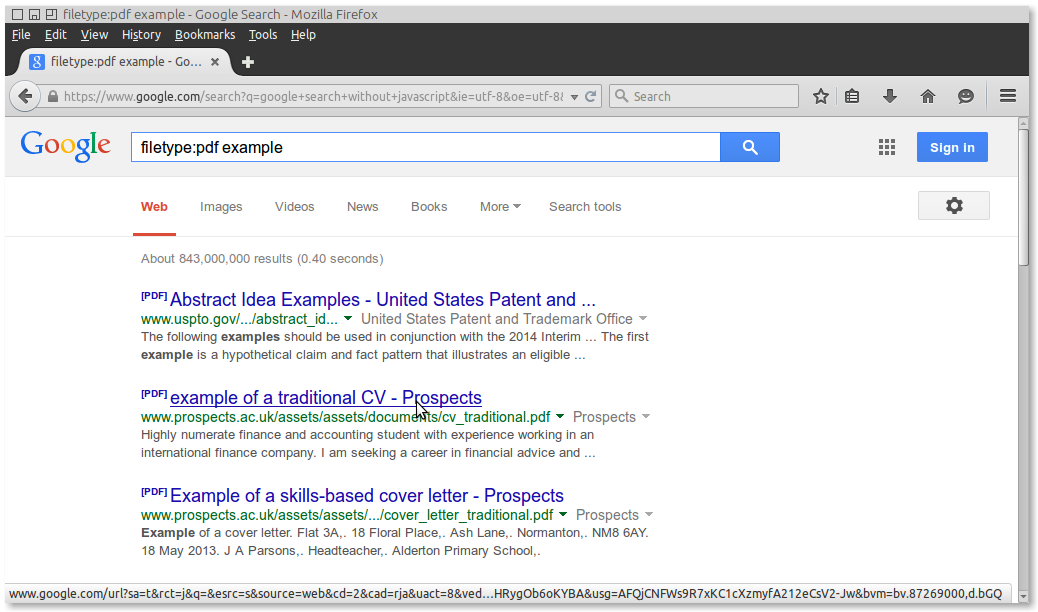 (Note: Google, when used with JavaScript, will rewrite each and every link upon mouse click, resulting with a stupid blank page when opening a PDF)

Upon click on a PDF link I get this prompt: 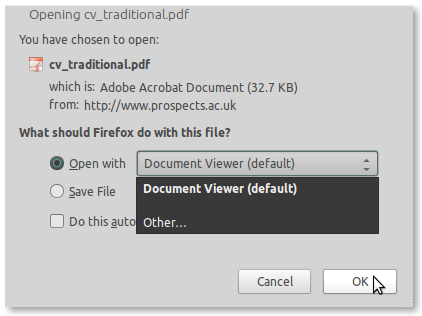 Notably, I can either choose an external application (also via Other), or to save the file - but there is no option to preview in browser (implying use of pdfjs). 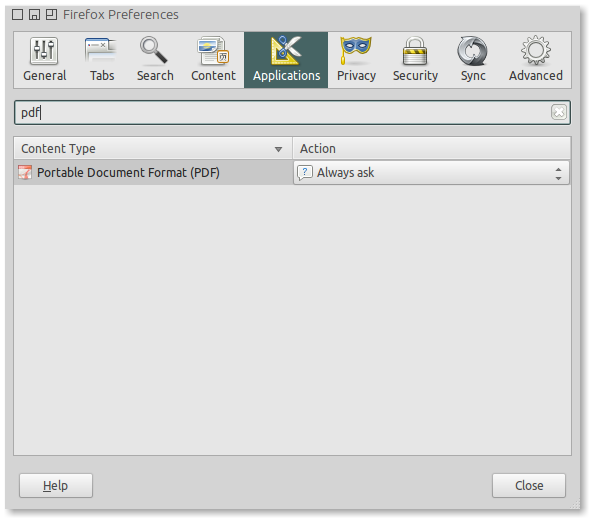 ... and about:config settings related to pdf look like this (for some reason, taking a screenshot in Gnome 2 always seems to want to close the menubar, resulting with the crooked image below): 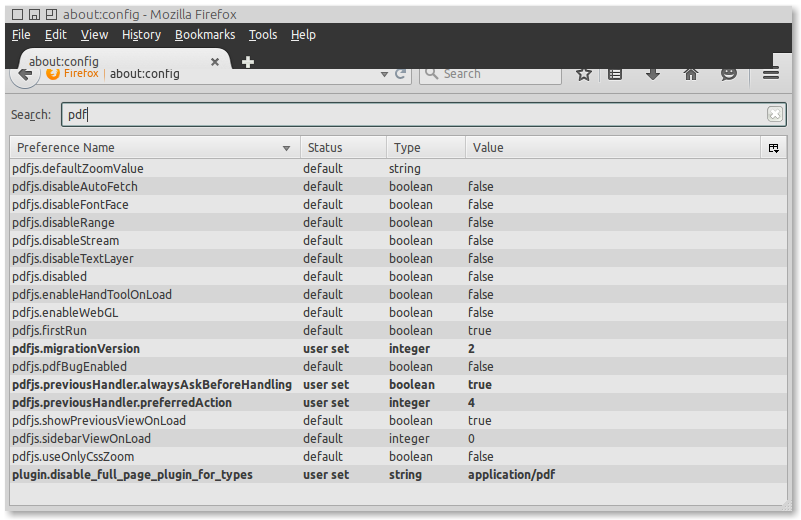 What can I do to have all three options presented as choices when I click on a PDF link?

This can be either a workaround or an answer, based on the original post asked by @sdaau and the attention brought by @phg. This is a practical solution anyway.

No, that is not possible. Firefox Addon may provide such interface but with newer addons using WebExtensions API, any direct modification to Firefox is not possible. Therefore the solution I have written here, with respect to OP, is a workaround.

Yes, that actually exist from before. Except nobody really wrote the solution until now; neither the help article for Firefox nor related SE sites had any-relevant-post with the solution yet.

Firefox limitation 1: The built-in viewer PDF.js is not an application by itself, and that makes impossible to set that as helper application within Firefox. Therefore "Preview in Firefox" can not be selected from "Open with" in the save dialog.

Hence the practical solution is to make the current profile of Firefox call another instance of Firefox that uses a separate profile that has been set to "Preview in Firefox" by default.

To understand the solution, user ought to know that:

Whenever the user open a link that has the content type, such as PDF, user will see the save dialog, then select other application from "Open with" and that is all.

In practice however, user may fail to choose from "Open with" because the application of choice is not listed there. Some setup is actually required, hence the missing step.

To actually add the application of choice, in this case the built-in viewer of Firefox, user must do all the following beforehand:

First, create a new user profile named pdfjs (any name of choice). Then create a Bash script (Linux) with only two lines as follows.

Firefox limitation 2: Firefox can not run multiple instances of same profile. User can open new tab or window from Firefox itself, but can not do the same via command line. This limitation does not apply to the default profile that run Firefox command without any option.

The script is saved at /usr/local/bin/pdfjs (similar name with user profile, my naming choice) and the script must be marked as executable.

The following screenshot combo shows to select "Use other..." (top left) and locate the script in settings of Firefox and then change the action. 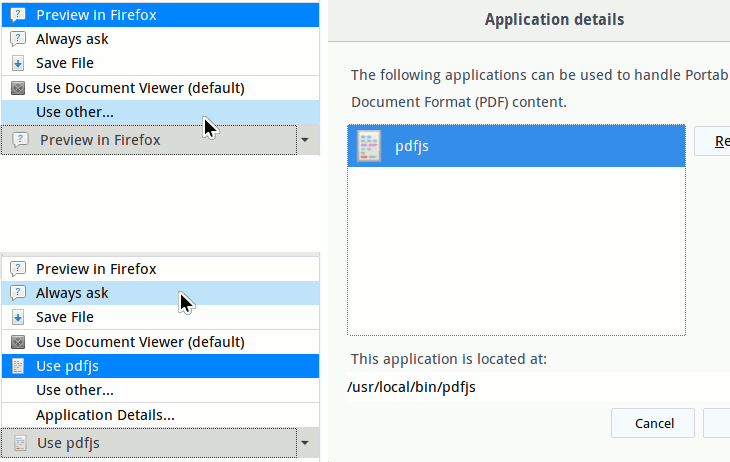 If the script was successfully added, user can see the script name being listed in the "Action" column and also "Application details" (right). Finally, change the action again to "Always ask" (bottom left).

To add the built-in viewer as the application of choice in Firefox:

All relevant steps 3 until 6 are done in Firefox with default profile.

The steps 4 and 5 are done in succession to simplify the setup. These steps seem contradictory, but both indeed have own purpose each.

Other details have been explained under "How to setup".

Same as usual: Run Firefox and open a link with the content type. The save dialog will appear, then select "Open with" and select the application of choice. Click OK to run the choice. 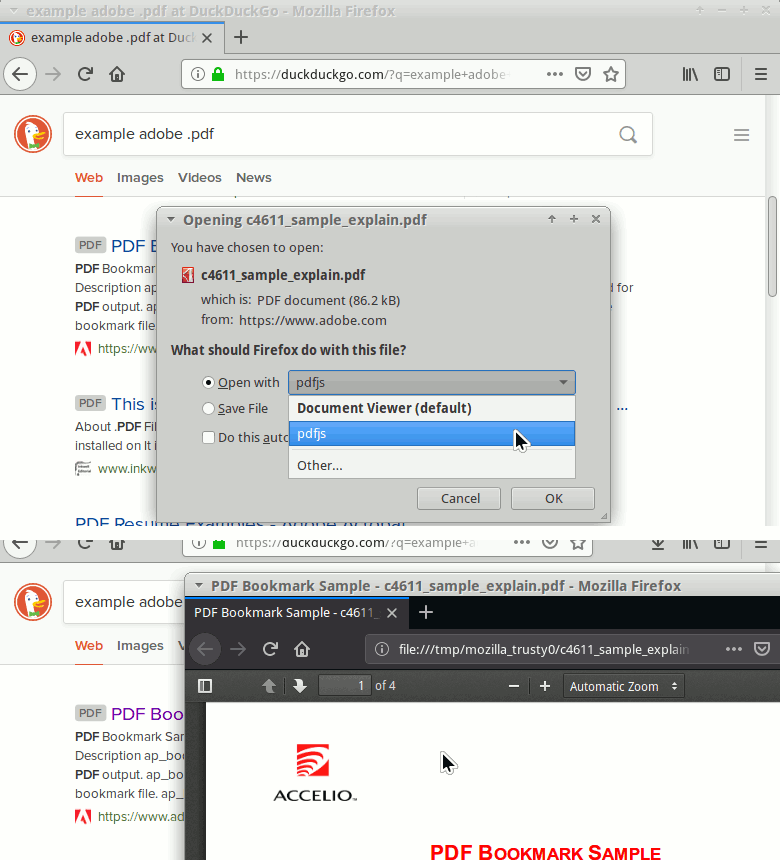 Limitation review: This solution allows to open PDF in Firefox with separate profile only one at a time. If the user want to open more than one, just drag and drop the link to PDF from Firefox (default profile) to the tab bar of another Firefox (separate profile) to open another PDF in a new tab.

Tested working with Firefox 63.0 and Bash script on Linux. Any release since Firefox 3.0 (three-point-zero) will do, except not tested with other scripts on Windows and macOS.

TL;DR The solution exists from before, but nobody wrote about that. Just add the application of choice. Tedious setup due to Firefox limitation. Native way is more practical than using addons.

Not the answer you're looking for? Browse other questions tagged firefox pdf firefox-extensions or ask your own question.

0
Firefox can not open PDF in mac os x
1
why did preview stop working from firefox?
7
How to have Firefox save txt files automatically instead of opening in browser
2
how to see pdf files in firefox window without disabling IDM
3
Use Firefox to open an external program and pass the URL as a parameter, ie click to stream with MPC
3
Firefox tries to open application/octet-stream with gedit
0
Visio 2016 pdf hyperlinks for documents giving download in browser
5
A way to force Firefox to open a file in its Pdf viewer?
0
How to configure Firefox to open JPG files in an external application