Where is the Apps key on a standard Microsoft keyboard?

ConEmu has a shortcut for renaming the current tab. It's Apps+R. I have never seen an Apps key on any keyboard. Where is it?

In computing, the menu key or application key (≣ Menu) is a key found on Microsoft Windows-oriented computer keyboards, introduced at the same time as the Windows logo (

) key. Its symbol is usually a small icon depicting a pointer hovering above a menu, and it is typically found on the right side of the keyboard between the right Windows logo key (

While the Windows key is present on the vast majority of keyboards intended for use with the Windows operating system, the menu key is frequently omitted in the interest of space, particularly on portable and laptop keyboards.

Some Windows public terminals do not have a ≣ Menu key on their keyboard to prevent users from right clicking; however, in many Windows applications, a similar functionality can be invoked with the ⇧ Shift+F10 keyboard shortcut, or sometimes Ctrl+⇧ Shift+F10.

Some laptop computers include a menu function on the Fn key (usually operated by typing ⇧ Shift+Fn); however, this generally invokes functions built into the vendor’s software and is not the same as the key described above. For example, the Logitech Illuminated Keyboard has an FN key where the menu key is usually found. Pressing FN together with the keyboard’s print screen key (PrtScr, above Home) produces the ≣ Menu key function.

Programmers using the Windows API can intercept this key by looking for a WM_KEYDOWN message with wParam VK_APPS (defined as 0x5D in winuser.h). It has key code 117 (0x75). 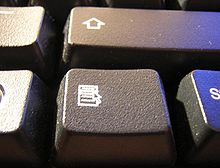 It's another name for the Menu Key. (http://en.wikipedia.org/wiki/Menu_key)

It typically has a picture of a right-click menu on it. 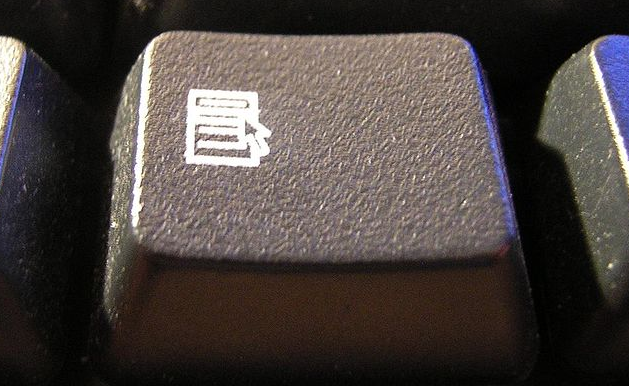 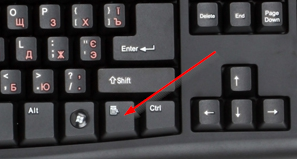 The "APPS" Key is also known as the "Context Menu Key". This may clarify (1) that it does what a right mouse click does, reveal the context menu for the current context and (2) that what you see depends on the context - what has the focus (active in-focus window, selected file/directory tree item, etc.) and (3) for those who sometimes DO make intentional use of the context menu function, what sort of things might be accomplished through the use of the "APPS" key. Also (4) it may suggest the oft-ignored methods for adding more to, or altering the performance of, the context menu's options for the current context.

On my Pavilion g7 it just shows the menu icon without the mouse pointer, but acts exactly like a right mouse click. And yes it is between the right Alt & Ctrl keys.

Not the answer you're looking for? Browse other questions tagged windows keyboard-shortcuts conemu or ask your own question.

1
What is the purpose of the right Windows key?
0
How to get caret position in a PDF for so I can highlight text using AutoHotKey?
0
Visio Keyboard Shortcut - Context Menu

4
Where does ubuntu store keyboard shortcut settings?
3
Is there a keyboard shortcut to get to the Apps section in “new tab” in Google Chrome?
35
How do I give each tab opened by a {Task} a custom name?
1
'My Computer' keyboard shortcut without Windows key
12
Open A New Tab In ConEmu, in the same Directory (git bash)
0
Getting Control-slash to work in emacs in ConEmu