Why is the "Change Picture" button missing / disabled in Word 2013?

I created a picture and placed in in the background of the mailing label cell content. Now I'd like to replace it with another picture without changing formatting settings, size or position. However – as you can see on the following screenshot – the Change Picture button is missing from the Adjust ("Anpassen" in German) ribbon group on the very left.

I therefore created a custom ribbon group that I called "Bild ändern" ("Change Picture" in English) and added the Change Picture button to that group. (Also visible on the screenshot.)

When selecting my picture, the Change Picture button stays disabled. My question is: Why? And how can I enable it? (Or which other way can I replace my picture?)

There is now a workaround.

The full range of Picture tools including 'Change Picture' should now be available."

I have just encountered this problem in Word 2016 in a docx created on a Windows system with no compatibility options checked.

I found the problem: I had drag and dropped the (png) images from Explorer into the document instead of using insert inside of Word. For some reason the images that have been drag-and-dropped aren't able to be changed either.

Inserting the images using the insert tab doesn't have any issues with later changing them.

This will update the file and enable the Change Picture functionality. Simply doing Save as and choosing the .docx format will not upgrade the file format, you have to do it through the more options choice.

Obviously, the file will no longer be backwards compatible with older versions of Word.

Select the Picture; then Right Click and Select "Change Picture" -- it works for me on Office 365 as a .docx file I never could get the Format tab options for change/replace picture available. I tried saving as docx with and without "Compatability".

Same problem here after a recent update of PowerPoint for Mac to version 16.10. It's really frustrating, and it'd be much better if "Change Picture" remained an option upon right-clicking on a picture (or at least as part of the "Picture Format" menu".

Seemed like there are other workarounds, but nothing like consistently getting the good old "Change Picture" back. Until I found this, which really satisfies me: https://social.technet.microsoft.com/Forums/office/en-US/e03e9969-740b-4b99-ab88-79173cd4c122/powerpoint-2016-change-picture-command-missing-in-drop-down-after-update?forum=Office2016forMac.

found the same issue here and the OS update to High Sierra didn't change anything. I was worried since no info or feedback was available. Now I feel less lonely with this issue.

Luckily just found a way to access this command I use all the time (like many of us). You can simply add it to the quick access ribbon. Then :

Here's the screen grab of this dialog box 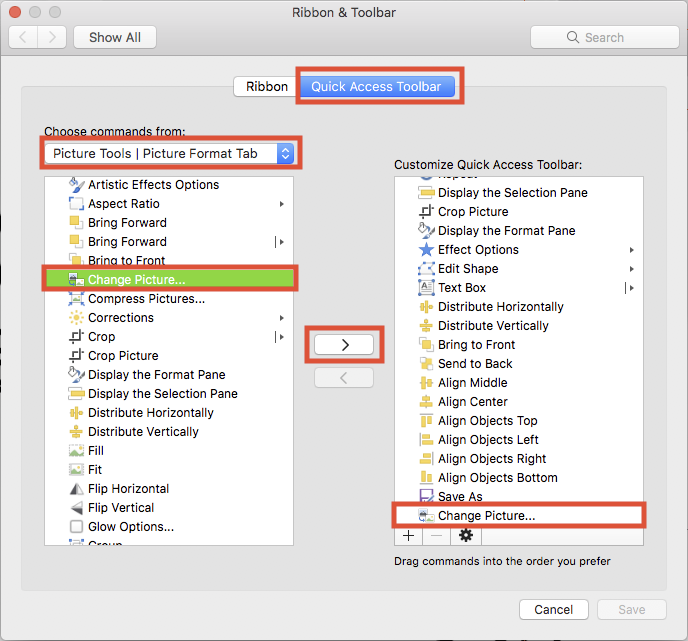 The modified quickacces toolbar looks something like this, with the "change picture" button circled:

Word answered it for me - click File, click Convert, it will change it to the new version and allow you to use all functions of Word2013

Since I didn't want to mess with the version of the original document:

Perhaps this is more complicated, but it leaves my original document alone (don't have to save it as a new format or anything).

I found an unexpected alternative, which works in Word 2010 (though my 'change picture' button is also missing):

This replaces the old image with the new one, rather than placing it adjacent to the old one. I'm not sure if this is intended behaviour.

This may be a compatibility problem, but it can be worked around by going to the drawing tools toolbox and using the "shape fill" button to insert a new image as the shape background.

This issue occurs as a result of dragging and dropping images directly from the folder on to the document.

Use Insert-->Picture instead. If you are using multiple images on your document, insert the first image using Insert/Picture, then format the the image as desired.

For the remaining images on your document: First copy and paste the formatted image then right click image-->Change Picture option to change to desired image.

I faced the same issue with a document I had.

I cut the picture out and pasted it back again and after this the issue is fixed for me.

This is my first time attempting to contribute to a question posted on the internet. I hope it isn't too far off-topic to post a solution to something similar-but not the exact same thing. Instead of MS Word 2013, I was/am using MS Word 2010 (the Office Professional Plus version, if that makes a difference), and instead of starting with a .docx file, I was given a 97-2003 .doc file to work with.

But generally, it was the same "where the heck is the change picture button?!?" reaction that brought me to this forum, so hopefully that makes this posting appropriate. I am so new that I do not have the reputation needed to post an image, but it looked just like Hauke P's except English-language version.

Under File > Info, I found an icon to Convert earlier file versions to an updated file format, relative to the software being used (so, for me, an MS 2010 version .docx file). Once I did the conversion, the "Change Picture" icon reappeared, and I was happy. Just wanted to write and share my joy.

I was faced with the same missing "change picture" button issue too. But after following the advices for conversions, here's what I found out:

If you place pictures, whether by dragging it from outside word app or by using the Insert tab in the app, in a .doc word file, the change picture option isn't available. I just kept the photos in the document then converted the whole file into .docx, the formatting of photos changed and the option "change picture" appeared in all of my photos.

I'm not sure if this is clear, but if it is, I hope this could apply to most of you, if not all. If your file is already in .docx format, you can try .docx > .doc > .docx conversion to see if it works.

1
Microsoft Word 2013 Change citation language
0
Disappearing documents in Word 2013
1
Changing a picture background to transparent in word 2013
12
How to group a picture and a shape in Word 2013?
0
How to fix the position of a picture on a fixed page, in MS Word 2013?
0
Picture content control - Word 2013
0
Word 2013-create button/hot key to highlight select phrases
0
How can I change a picture in word using drag and drop
1
How to prevent an embedded object picture from appearing in the table of contents in Word 2013?