I'm Italian, so sometimes I have to start a sentence with the letter 'è' (it is the third singular person of the present simple of the verb 'to be').

In Linux, writing that capital character is easily achieved by hitting the key next to the 'p' one (in the Italian layout, it prints 'è') with the Caps Lock key on. How can I achieve such a thing in Windows? It would be much better than having to remember the ASCII code every time, also considering that I'm on a laptop, so I should use the Fn jey to enable the numeric keypad, but the combination Alt+Fn+7 and such is already assigned to some default functions. I should enable Num LK every time and disable it afterwards.

I'm aware of this question, but I'd prefer to have it with Caps Lock + è if possible, because the è key is occupied in all of its combinations (with Shift it prints 'é', with Alt Gr '[' and with Shift+Alt Gr '{'), and using Alt Gr with other keys would arise confusion and occupy a combination which I could use for other characters (like greek letters I use for physics or other ASCII symbols), like it is in Linux for the Eliminate Dead Keys kayout

As an example you here the mapping for key E: 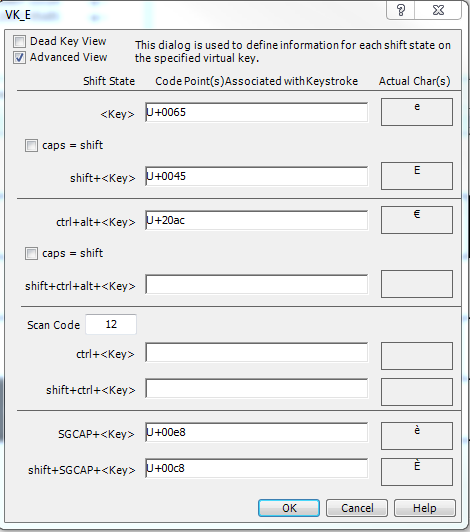 Not the answer you're looking for? Browse other questions tagged windows keyboard-layout capslock dead-keys or ask your own question.

6
Switch the keys caps lock and shift
4
Typing capital ç on a French keyboard
21
How can I remap the Caps Lock key in Mac OS X Lion?
3
Caps lock can only be turned off by shift key, regardless of setting
5
Ubuntu doesn't release caps lock
6
Caps lock key behavior on PS/2 keyboard is reversed
1
Caps Lock for Numeric Keys
0
Map a key combination to get the CAPS LOCK behavior on Windows 10