Can a loose SATA hard drive disconnect itself because of vibration or shaking?

I have a WD Green 2TB which was working perfect until I've put it in a new case which doesn't use the standard screw system to fix the drives, but instead uses these plastic HDD trays which doesn't seem to be tight enough for its moving parts. 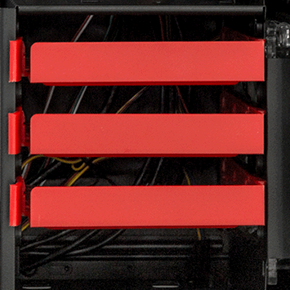 So after I've moved everything to the new case (Sentey Triac) my HD started to disappear from Windows after a while and won't appear again until rebooting the computer. Mostly after I put it to do some reading/writing as it's not my system drive, but a storage one. System drive is a SSD and works just fine in one of those trays.

This has been driving me crazy these past few days thinking it could be the HD failing, Windows fault or even the new PSU I got with the case. I'm pretty confident that the HD is not dying yet, it's not a Windows problem and the new PSU has nothing to do with it.

So I decided to remove the HD from the tray and put it on a cloth right on the floor.

I'm backuping everything in the drive just in case and also running some health checks. It's been a few hours without problem (still on the floor), much more than I could go through with the drive in the case tray.

Could that really be the problem? Have you heard something like this before?

Based on your explanation, I would assume that the issue is with the connector or drive controller. The likely answer is the drive; it's far more complex, so more things can go wrong. Vibration can exacerbate whatever issues your drive may have been having, or it may just be a coincidence that it began failing around that time. Usually the SATA cables fit tightly. But by your specific mention of a tray, I wonder if there's a cable going directly into the drive, or if it's one of those removable trays.

If it's one of those trays with a backplane (the thing that plugs into the drive, with electronics rerouting the cable plugs), I would try it out of the tray for a while (like you are now). If the problem goes away, you know your tray is bad. If it's just the kind of tray that cradles a drive, and your SATA cable is plugging in directly to the drive, and the only thing that's changed is it's mounting situation, I would wager the drive itself is failing. Also, try it with a different power line from your PSU.

Further, I've actually had this issue with some of the cheaper, slower WD Drives in the past. I but a lot of externals, and WD specifically seems to drop out intermittently preceding a full drive failure. As frustrating as it is, I've actually come to appreciate the ‘telltale’ sign of an approaching failure.

Finally, I think you're doing the right thing. Back the drive up, and run it out of it’s tray. If the same things happens, swap your SATA cables. If the same thing happens, you can be fairly certain it’s the drive. If I may be so bold, it seems like the drive is spinning down, and once it goes into low-power sleep, it drops out of the system. Rebooting triggers a spinnup with the system, and it manages it and shows back up, but after a while, it will enter low-power mode and drop out again. Just one possible explanation aside from the cable.

Since you mentioned plastic parts, this could also indicate a grounding problem in your computer. If the drives are insulated from the chassis (no metal mounting), then they are only grounded through their power supply cables, which should be good enough, and very close to the grounding of the signal pins, but might not be if there is poor grounding elsewhere, perhaps in the original PSU line you were using. You can take a volt-ohm meter and measure for voltage between the negative of one line and another. Ideally, it should be zero.

Not the answer you're looking for? Browse other questions tagged hard-drive sata case or ask your own question.

0
How can I cram more harddrives into a case?
0
SATA Hard Drive problems
1
Can a loose SATA connection cause the drive to click
3
IBM server cannot install SATA Hard Drive
15
What is the safe temperature limit for a consumer SATA hard drive?
3
Could SATA communication issues cause the hard drive to reallocate sectors (thus causing system hangs or crashes)?
0
ASUS P5B Plus motherboard - no any drives found - how to restore RAID array?
0
Can I Replace SATA 3.0Gb/s hard disk with With SATA 6.0Gb/s in Toshiba Satellite c660 laptop?
2
Hard drive (SATA) making trouble when connecting via USB
11
Can a short-circuit damage a hard disk drive?