Difference between a netbook, a notebook, and a laptop

The term's laptop and notebook are generally interchangable. Traditionally they refer to any type of portable computer. However, with the introduction of the netbook, a laptop generally refers to computers with screens of 14+ inches. These computers are considered "full featured."

Full featured means they have regular Intel or AMD processors and optical drives.

A netbook is a small, ultra-portable computer. Microsoft defines a netbook as any portable computer with a screen less than 10.7". They generally weigh less than 3 pounds and have no optical drive. Currently netbooks mostly use the Intel Atom processor.

There is another type of laptop that covers portable computers with screens that are 11"-13" in size. These are generally very portable, light-weight, but are full featured (have full blown Intel/AMD processors). They usually have optical drives.

Sorry for digging up a old topic but I only just found it and had this to share! 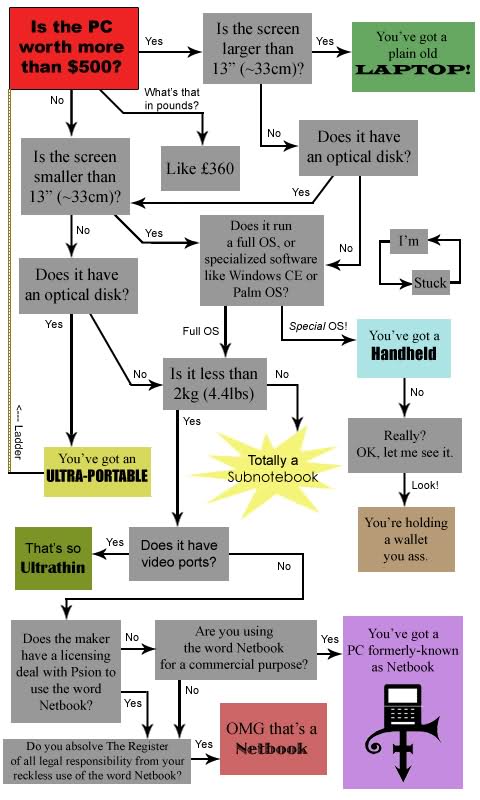 Descriptions of these categories:

You have to go way back in history to find the original difference between a notebook and laptop. The original laptops were 2-3" thick and weighed 10ish pounds despite having a small LCD. They replaced luggable systems that weighed 20ish pounds, had a suitcase like form factor, typically a mini-CRT as the display, and which had to be thumped onto a desk to be used. The term notebook originally referred to the first systems with a form factor similar to current 14/15" models. Now days the laptop/notebook terms are used synonymously.

New terms are invented each time a new class of small computers becomes popular and/or somewhat standardized, to distinguish them from the previous ubiquitous type.

Of these terms, all have levelled off in their usage except for "laptop" which seems to me the generic term for now.

Here's a useful visualization thanks to Google Ngram Viewer:

Notebook and laptop seem to be very similar in definition. I have never noticed any difference between their uses.

However, netbook is usually used to describe a very small, ultra-portable laptop / notebook. The size is usually smaller than 10" (although some people also use it for 12"), and the weight is usually in the range of 1 - 2 kg.

Notebooks and laptops are the same to my knowledge (unless of course you're talking about paper notebooks).

A netbook is a laptop designed primarily for things like internet browsing, word processing, messaging and the like. A netbook is also small enough that you can bring it with you wherever you go. As indicated by the other answers, a netbook is usually no more than 11 inches in size and will not weigh more than 2 or 3 pounds. TYhey also usually (but not always) sport an Intel Atom processor, which is a low powered processor that has the advantage of offering a minimum of power drain.

Microsoft sells XP to netbook manufacturers at a reduced price, so that they don't concede this fastest growing market segment entirely to Linux. To get this reduced price, there is a maximum hardware specification of what Microsoft considers a netbook. It includes a screen no bigger than 10 inches, hard drive of 160 GB, 1 memory slot shipped with at most 1 GB of memory. Many buyers have to throw away the 1 GB SODIMM when they want to upgrade to 2 GB. I don't have a printable reference for this information, I heard it on the [PC Radio Show].1

I just heard about another category called Smartbooks that seem to be somewhere between a smartphone and a netbook. They use RISC processors and a small (6"), high resolution (1024x?) screen, have a keyboard (thumbboard?) and run a 'proper' OS, e.g. Ubuntu Linux. They are starting to hit the Japanese market.

I think of a netbook as something that's cheap enough to be an impulse buy and small enough to fit in whatever bag you happen to have so that you will take it anywhere. It will be powerful enough for most web apps, but probably not much good for games. It's probably not going to be your main PC if you do more than surf. A laptop could be a main PC.

Laptops and Notebooks are synonymous. Netbooks are smaller and more portable and have longer battery life, they are generally used for simple things like browsing the internet and word processing and come equipped with an Intel Atom processor.

I once heard someone say that the term "laptop" is being avoided lest someone uses it on their laps, injure themselves through overheating, and sue the manufacturer.

Apart from what others have already mentioned ... laptops were usually considered somewhat larger then notebooks, due to their drive unit (FDD, CD/DVD ...). That difference nowadays has disappeared.

Not the answer you're looking for? Browse other questions tagged laptop netbook terminology or ask your own question.