Only 1 playlist for playing songs in Foobar2000

I've switched from MusicBee to foobar2000 recently but one thing annoys me. In foobar there's 4 different playlists which each contain bunch of songs:

As you can see, I'm using both the Playlist View and Playlist Tabs. What I want is to find a way to remove all the playlists and combine them into a single one. That way the playlist tabs would only show 1 tab. I imagine this requires some changes in the core of the application since one of the tabs is "Library Selection" and in order to remove that, you need to somehow show the selected tracks elsewhere. Winamp has its own list for this, MusicBee and MediaMonkey (my preference) show them inline in the library section. Maybe there's a component for this?

Sometimes I play some songs from the library and then double click on a file on the Windows Explorer. When the song finishes it then returns to the previous playlist and plays those songs. The other issue is that sometimes I want to go to the playlist I was playing songs from but I have to go through all of them to find it. These are of course small things but they annoy me when I have to do them 20 times in 1 day.

Managing a playlist this way is a lot easier, then I won't have to move back and forth between playlists. At least they should remove the "Library selection (playing)" and "Query" playlists. It should be "Library Selection" and "Default" where the latter is for all the playing songs. 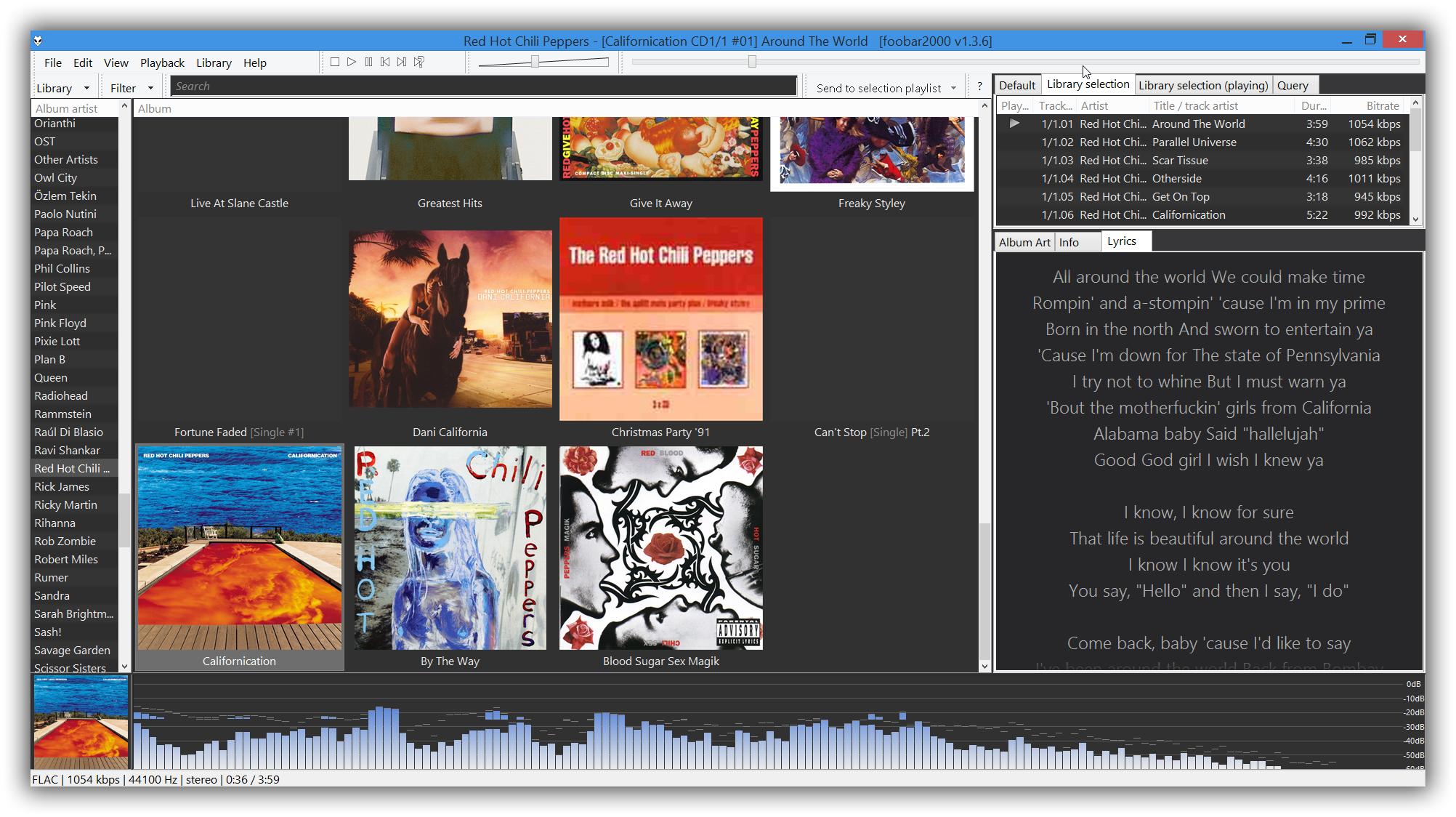 And this is my design for MusicBee: 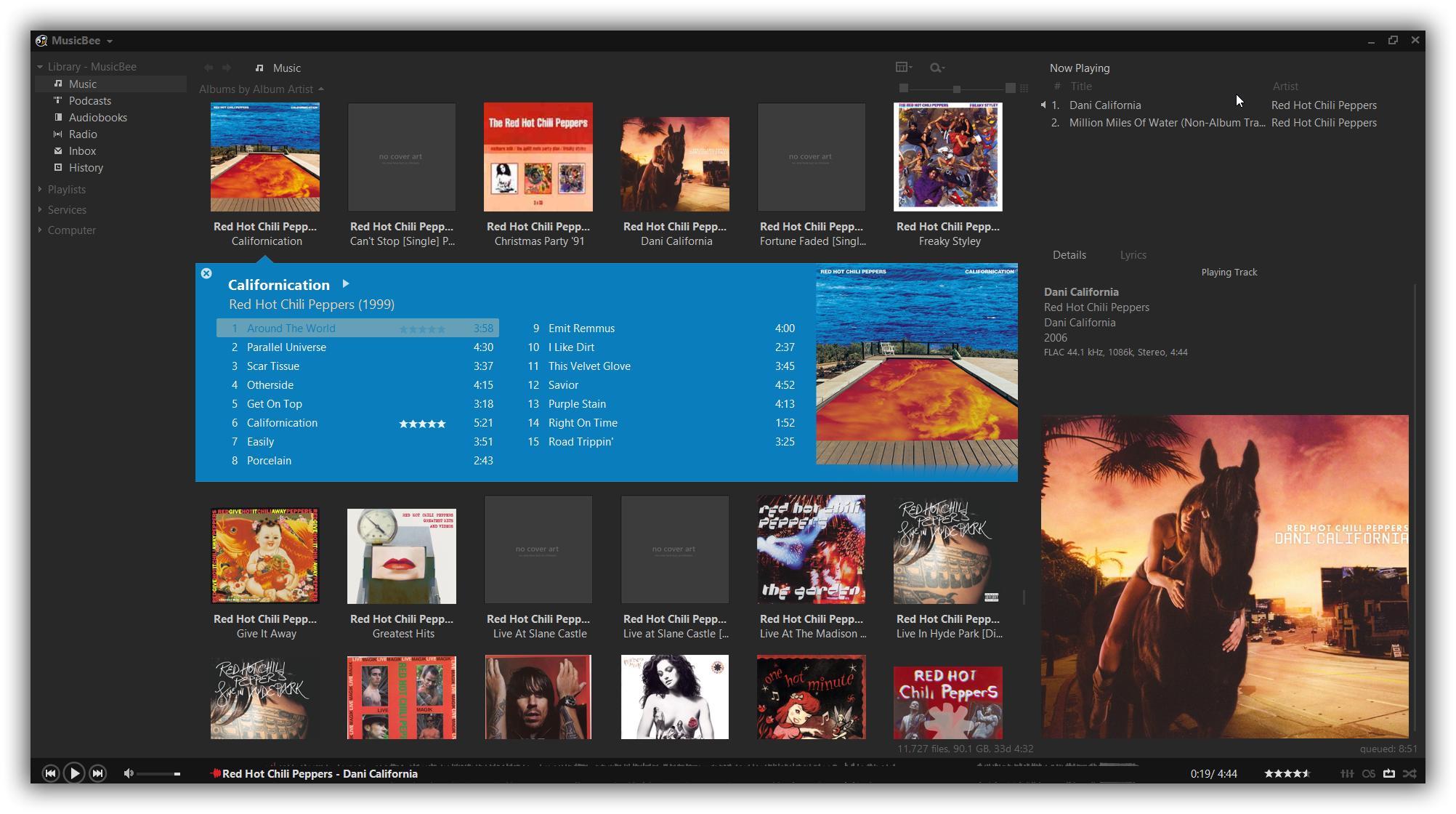 In MusicBee when I click on an album in my library, I can see the tracks in that album. That way I can easily play one of them. When I double click on the name, the album will be added to the "Now Playing" section and the selected track will be played. If I double click a song on Windows Explorer, the playlist will be cleared and the song will be added to the same section. And when this song finishes, the playback will stop as expected.

Now in Foobar2000, if I select the library, the "Playlist View" will change to show my selected tracks. If I double click on it, it will play. Now if I double click a song on the Windows Explorer, the song will be added to another tab (I think it's Default) and it will play from there. Then, when the song finishes, it will continue from the library selection. (?)

If you compare the two, you can see that the MusicBee only has 1 playlist (named "Now Playing") and if I manage it, (for instance reorder songs) I know where they are at. In contrast, I swear sometimes the playing song is in neither of the tabs. I think the MusicBee behavior is a lot more user friendly and I'm looking to change Foobar2000 to the get the same result. Frankly if it wasn't for some quality differences, I'd stick with MusicBee since it's more beautiful and does what I want it to.

On a side note, I have a HiFi music system and after reading a lot of reviews I think Foobar2000 has a slight better quality. That's why I use it. Also it's a very resource-friendly program.

I have installed your theme. You do not use Playlist view, only Playlist Tabs and Tabs.

The simplest way would be just to use only Playlist view instead of Playlist Tabs. But from your comment I see that this is not your main concern.

To manage multiple playlists while displaying only one in Playlist view, you can use Playlist manager in parallel, which is just a list of playlists names.

0
Is there a Foobar2000 component that would display only the playing playlist in the Default UI?

0
Getting foobar to shuffle between playlists
5
How to restore the special playlist in foobar2000 that shows all songs selected in Album List?
0
Playlists in foobar2000
4
How to move tracks from one foobar2000 playlist to another?
0
Display currently playing track at the top of Foobar's playlist
1
Multiple tracks playing at once in foobar2000?
0
How do I make only *one* specific playlist have "shuffle play order" in foobar2000?
0
foobar2000 Columns UI - Disable editing song titles?