Apple's Mail showing "the identity of smtp.gmail.com cannot be verified"

When trying to send email using Gmail in OS X Mail, I get:

The identity of "smtp.gmail.com" cannot be verified.

The certificate for this server is invalid. You might be connecting to a server that is pretending to be "smtp.gmail.com" which could put your confidential information at risk. Do you want to connect to the server anyway?

In this case (April 4th, 2015) you could safely click "Connect". But in general such warnings should not be ignored. Here's how you can investigate future occurrences of such warnings: 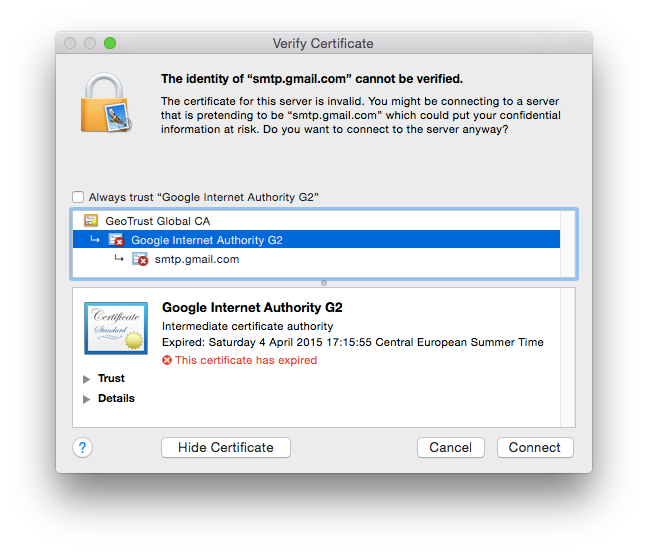 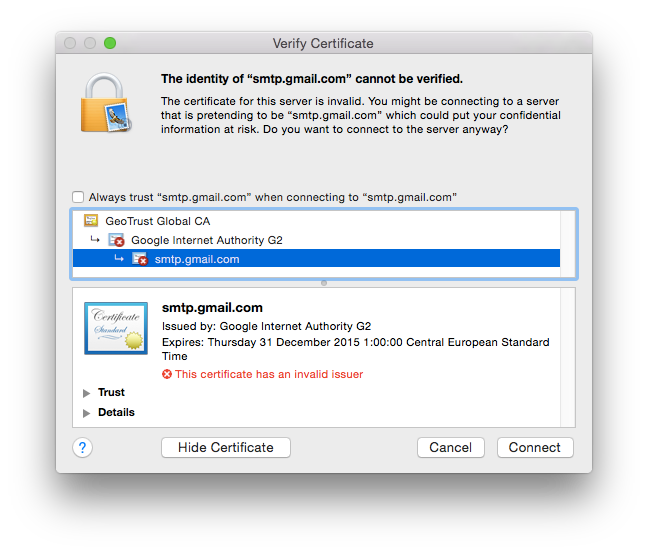 So, the certificate for Gmail was still good, but the "intermediate issuer" that was used to create it didn't last as long as Gmail's certificate. That was an error at Google's; meanwhile they have installed a new certificate on smtp.gmail.com which uses a different issuer certificate. However, as this was trusted until a few hours before the problem started in April 2015 (and assuming you used it before, when all was good), it was safe to select "Connect" then.

Google sent an email to those subscribed to alerts:

We expect to resolve the problem affecting a majority of users of Gmail at April 4, 2015 1:00:00 PM PDT. Please note that this time frame is an estimate and may change.

smtp.gmail.com is displaying an invalid certificate.

2
How to set up Gmail in Outlook when the ISP blocks SMTP?
1
Why doesn't mail that I send from Mail.app on my mac show up on my iPhone's Sent Mail when using gmail?
5
Suddenly can't send E-Mails with Apple Mail to Gmail SMTP
0
How to know the connection configuration in Outlook if the mail profile is automatically fed?
3
How can I tell if ISP is blocking outgoing ports?
2
Mozilla Firefox won't connect to Google, IE can
1
Why can`t I authenticate to my gmail account neither from my printer, nor from my manually configured mail user agent?
2
Configure Postfix mail server to send emails to Gmail