The download speeds while connected on Wi-Fi to the same router—an ADSL2+ Wireless N300 Modem Router—seems to be significantly faster on my phone than on my laptop. This problem doesn’t occur all the time, but the Internet connection on my laptop—which is running Ubuntu 14.10—occasionally reduces in speed and becomes unstable, while the Internet connection on my phone remains at the same speed and is continuously stable.

As a comparison, I performed a test on speedtest.com at the same time and the same location for my laptop and my phone during an “unstable connection phase” for my laptop.

I was wondering what potential causes there could be for this discrepancy?

Here are the speedtest results from my laptop (Lenovo Y50 UHD):

And here are the speedtest results from my phone (Samsung Galaxy S5): 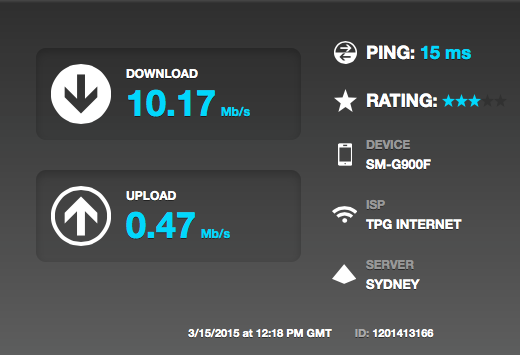 Note that while the Samsung Galaxy S5 has a “Download Booster” feature which can use your Wi-Fi and mobile network simultaneously to increase download speed, for this test I turned off the mobile data completely on the Samsung Galaxy S5 but I still received similar results comparing my laptop and phone.

I believe this boils down to what is—very sadly—a common wireless headache: 802.11n Wi-Fi implementation is so horrible and inconsistent between devices that the 802.11n protocol becomes fairly useless. This PC World magazine article titled, “Wireless Routers: The Truth About Superfast Draft-N” summarizes the headaches quite well; bold emphasis is mine:

We also found that routers based on different draft-n chips (the Belkin uses Atheros chips, while the other three are based on Broadcom chips) do not interoperate at high speed. Buying products from the same vendor doesn't always ensure that all of them will use the same draft-n chips, either: At least one company, Netgear, is selling similarly named routers and PC Cards that are based on different draft-n chips, and you can determine which chip a product uses only by checking its model number and/or the chip logo on its packaging.

Especially this assessment of the overall murkiness of the 802.11n world of hardware and how manufacturers are essentially using end users as “alpha” and “beta” testers:

But we'd rather vendors didn't use paying customers to do their alpha and beta testing. You shouldn't have to install multiple firmware updates to see promised performance on a brand-new product.

To better understand how this kind of stuff plays out in a real-world situation—like yours—let’s look at all of the supported wireless protocols of your devices:

That said, knowing that alone won’t help you much in theory or concept. In practical terms there are only three solutions I can provide that I think will work.

And all that said, if this were the headache I was dealing with, I would do as I outline in idea 1 and just spring for a new Wi-Fi router. Typically an ISP provided combo modem/router is just lacking in features and updates as well as lacking in support from a larger world of users. By purchasing a new router you not only solve your issue quickly, but you will instantly be able to tap other users of that more commonly used router for advice and tips if new issues come up.

For your specific situation where you use an Intel network card on Ubuntu 14.10 (which has a kernel newer than 3.13), a change in the iwlwifi driver can possibly have affected the throughput of your Intel wireless network card.

This change can be be reverted by creating the file /etc/modprobe.d/iwlwifi.conf containing:

To test it, reload (unload and load) your Intel wireless modules with modprobe commands:

You can also verify the parameter by reading a file in sysfs:

This change improved by LAN throughput from 20 Mbit/s to 80 Mbit/s.

Not the answer you're looking for? Browse other questions tagged ubuntu router internet-connection wifi-configuration or ask your own question.

2
How important is it to manually configure different Wi-Fi access points on the same SSID to different channels?
2
Would these differences in wireless vs. wired internet speeds warrant a new router?
1
Fast DNS lookup, fast ping, slow HTTP over Wi-Fi but fine over wired Ethernet
1
How to know which router I am connected to in my Institute Hostel?

5
Smartphone breaks the Internet connection when a call is received while wireless connection is on
0
Internet Speed on Router vs Device
1
Upload speed much higher than download speed:
29
How can Internet speed be 10 times slower without a router than when using the same connection with a router?
1
How to check for speed-limiting devices on a WiFi network?