How to stop System Interrupts from eating up CPU

I have Windows 8.1 Pro N x64 on my Toshiba Satellite L505D-S5965 and there is a processes in Task Manager that is eating up my CPU. It's called System Interrupts and it takes up 1%-29% of CPU Power (It changes a lot). I heard that AMD hardware causes it so I uninstalled then reinstalled my ATI Radeon 3100 Graphics card but System Interrupts was still there. I also uninstalled then reinstalled my Realtek RTL8187SE Wifi Card and that didn't work. I also saw that I should install Process Explorer and that it would help me see what's causing it but I don't know where I should be looking. How do I keep System Interrupts from using too much CPU?

"System interrupts" isn't really a process, even though it appears in the "Details" tab lists of processes. Interrupts are not charged to any particular process. Task Manager just displays it that way to give it a label.

A high interrupt rate is normally caused by one of:

One way to diagnose this is to remove (or, if it's not removable, disable) various devices until the problem goes away. If it's a laptop, try removing the ATI driver and run with the Windows default video driver. Otherwise, try a different video card. For your WiFi card - did the interrupts go away when you uninstalled it?

The only tool I know of that is really useful for these problems is the Windows Performance Toolkit. It will show you which drivers (and, if symbols are available, which routines in them... though that isn't always useful) are taking up all the time.

Here's a thread over at ServerFault that gives you the basics. https://serverfault.com/questions/104131/how-can-i-find-out-what-is-causing-interrupts-on-windows

You can try LatencyMon. That will tell you what module is taking the most time with respect to DPC and ISR.

I was getting bad stuttering on my system. You can see below that the culprit seems to have been ndis.sys.

I turned off the on-board LAN controller in the BIOS because I wasn't using it (I am using a USB wireless dongle for my network adapter). And I updated the driver for my dongle. That seems to have fixed the problem. Fingers crossed, the problem was somewhat intermittent. 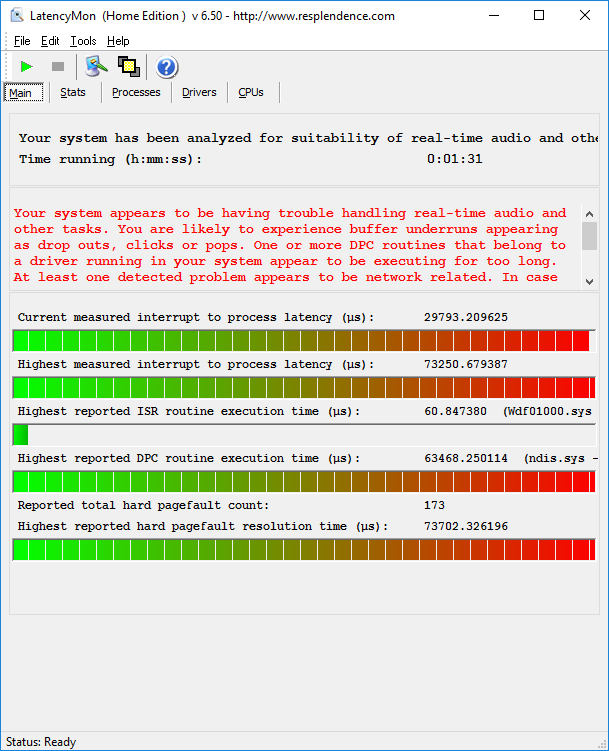