Is there a way to set Excel up whereby trailing spaces are visible?

I know lots of techniques to remove trailing spaces from cells in Excel (e.g. TRIM), but sometimes I get given large sheets from other people which contain trailing spaces in dangerous places, where it's not obvious there's a problem because the trailing spaces exist in multiple places (so lookups etc still work) - but those trailing spaces cause unexpected problems later.

In Word and various publishing applications, there are options to show invisible characters. For example, in Word, it's called "Show non-printing characters", and it looks like this:

Is there any kind of setting in Excel whereby invisible characters like trailing spaces could become visible? I'm not fussy about how they become visible, just that they do, across the whole sheet (i.e. not just in one selected cell).

1: Use a conditional format with the whole table selected and a formula to set the condition, I used

and all cells with a leading or trailing space got a red background and are double underlined, this will let you focus on those cells that have extra invisible spaces and as @fixed1234 suggested the underlines with show you where the spaces are. Cells that Excel treats as numbers do not show up with spaces even if they were entered with spaces (unless preceded by an apostrophe thus forcing it into a text format). 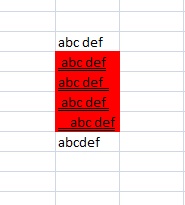 2: Find or edit a Font where the space character is not blank.

Some ideas about font editing in the answer linked https://graphicdesign.stackexchange.com/questions/19554/how-to-replace-a-character-in-a-font-with-another-character

If I understand what you want to do, then unlike Microsoft Word (which allows you to do what you are asking for), Excel does not have a way of showing you the non-printing characters I think you are interested in. One reason may be because what you see in the cell may not be "real"... it could come from, or be a concatenation from, other cells on the sheet, or from a different sheet or even from a different workbook. On top of that, the cell may be formatted to look the way you see it, but the actual value in the cell may be completely different. I think it would be a monumental task for the programmers of Excel to figure out how to show you the "invisible characters" you seek given the various ways in how the value displayed in the cell could be formed to look that way.