We are looking to provide public Wi-Fi in an area that currently isn’t covered by any Wi-Fi network.

However, nearby there is another Wi-Fi network of ours consisting of a DHCP router—with incoming Internet connection—and three wireless extenders.

For the new network we will need a new SSID set up for the public but we want to use the same internet connection from the existing network. Before we buy any new routers I wanted to check that it would be ok to just plug any wireless router into one of the three extenders, set its SSID to something different and it would still receive Internet connectivity just fine?

Then we would plug another extender into that new router to expand the coverage of the new network.

The new SSID would only need to be available through the new router (and new extender), so won’t need multiple SSIDs from any single router.

To me that sounds like it should work, but it is using a bit of daisy chaining so wanted to check.

Here’s a diagram of what I currently have (Private network - left) and what I want to add on (Public network - right). Lines represent ethernet cables. 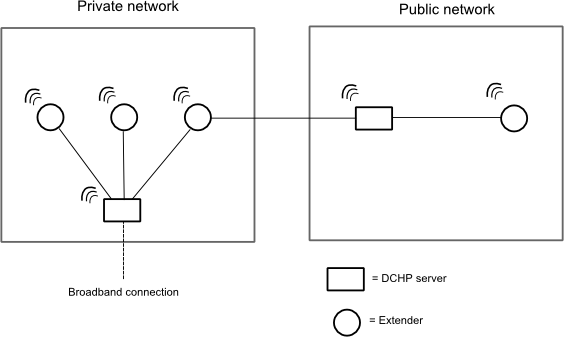 At the moment all the extenders are just old routers that where I have simply turned off the DHCP server and set them to the same network SSID as the main router.

Whatever I buy could be a router or a wireless access point, as long as one of them has the ability to be a DHCP server.

You want to isolate the open Wi-Fi from your LAN. Your diagram leaves your local network wide-open.

One way to do this cheaply is by building your own firewall: set up a computer with 3 LAN cards: 2 Ethernet, and one Wi-Fi.

You would use firewall software like (free) Smoothwall, and assign the wifi card as a PURPLE interface. The other two ethernet cards would be RED and GREEN.

You can use an existing Wi-Fi router for your GREEEN local network by connecting one of the non-WAN ports to the switch. Turn on authentication and turn off DHCP services on this router.

Firewall software also provides for an ORANGE interface, but my understanding is that this allows for a DMZ and is not by default completely isolated from the private LAN

It might be worth a phone call to your provider to find out if you're allowed to have more than one WAN IP. If you are, and as long as you don't mind the two networks being completely separate, then you just need a dumb switch inside your modem. Connect two routers inside the switch, both configured for WAN DHCP, and they should both pull unique IPs from the provider. The two routers can be configured any way you want, including DHCP on the LAN side, WiFi, etc. This is the setup I'm using now and it's great. Unfortunately, not all providers allow more than one IP. In my case, I had to call Shaw and ask them to enable the second IP, but it didn't cost anything extra. There are ways of doing this without the extra switch, but they tend to be more complicated.