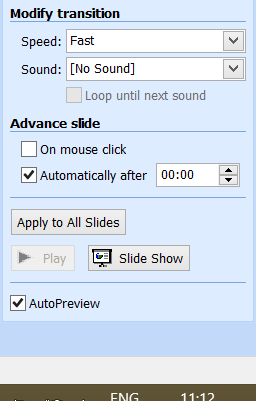 If you set a slide's transition time to 00:00, it doesn't actually skip the slide, but it shows it for a veeeery short time - let's call this time t - and then goes to the next slide. If there are a large number of slides in the show, and they all have slide transition time set to 00:00, the whole show can last for an appreciable length of time. t may be very small, but 1000t can be several minutes.

What's this good for? Animation! Powerpoint's built-in animations are very good, but if you want more flexibility, nothing can beat a bit of good ol' stop-motion.

On my current version (Powerpoint 2003 running in Windows 8.1), a 1000-slide-long presentation where every slide is set to 00:00 lasts for around 17 seconds. I haven't got other versions to hand, so I can't give any other figures, but they were a lot longer. If I try to watch my old animations, they go way too fast!

Is there any hack I can use to manually change the actual time that a 00:00 slide lasts? Failing that, is there another way? A VBA trick? Deliberately slowing down my computer?

I can see reasons to do a movie and reasons not to. If you want to try the latter and adjust the timing for all of the slides, this'll do it. Change the 5.55 to however many seconds.fractions you like:

If nothing else, you can use this to adjust the transition times until you have it running the way you want it on your computer, then make a video. You may have to adjust things again after testing that, because the act of making a video may also change the timings.

Another solution (not as quick as the accepted answer, but more elementary):

It's actually possible to set the transition time to a fractional value, just by typing it in: 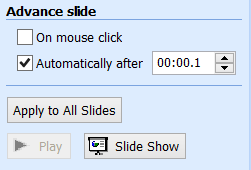 I'd somehow assumed that, since the default value in the box was

that this would just correct to 00:00, but it doesn't, and the presentation ends up running slightly slower than it does at 00:00.

Not the answer you're looking for? Browse other questions tagged microsoft-office microsoft-powerpoint animation or ask your own question.